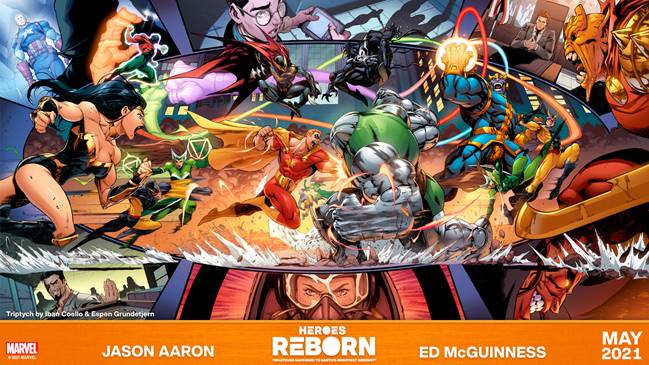 Whatever you might have been thinking Marvel’s new Heroes Reborn would be, it’s probably not that. Though it does look kinda interesting.

Last week we told you about the new Heroes Reborn. A brand new something that Marvel Comics was planning for this year, playing off of the 90s maxi-event. At the time, there was painfully little in the way of details.

With that in mind, we guessed a few things that Heroes Reborn 2021 might be. But, if like us, you were guessing at what might be coming, well you were likely wrong.

Heroes Reborn is about. world without an Avengers team alright, but not quite like you might have thought. That’s because this new event has nothing at all to do with the 90s HR stories.

Welcome to a world where Tony Stark never built an Iron Man armor. Where Thor is a hard-drinking atheist who despises hammers. Where Wakanda is dismissed as a myth. And where Captain America was never found in the ice, because there were no Avengers to find him. Instead this world has always been protected by Earth’s Mightiest Heroes, the Squadron Supreme of America. And now the Squadron face an attack from some of their fiercest enemies, like Dr. Juggernaut, the Black Skull, the Silver Witch and Thanos with his Infinity Rings. Blade is the one man alive who seems to remember that the entire world has somehow been… reborn. And so begins his search for the cause behind this ominous shift in reality.

From Jason Aaron and artist Ed McGuinness, Heroes Reborn is set to kick off in May 2021.

Jason's been knee deep in videogames since he was but a lad. Cutting his teeth on the pixely glory that was the Atari 2600, he's been hack'n'slashing and shoot'em'uping ever since. Mainly an FPS and action guy, Jason enjoys the occasional well crafted title from every genre.
@jason_tas
Previous Trailer: Skater XL’s new Warehouse level brings the outdoors in
Next Hot Toys bringing The Mandalorian’s Dark Troopers to life in 2022