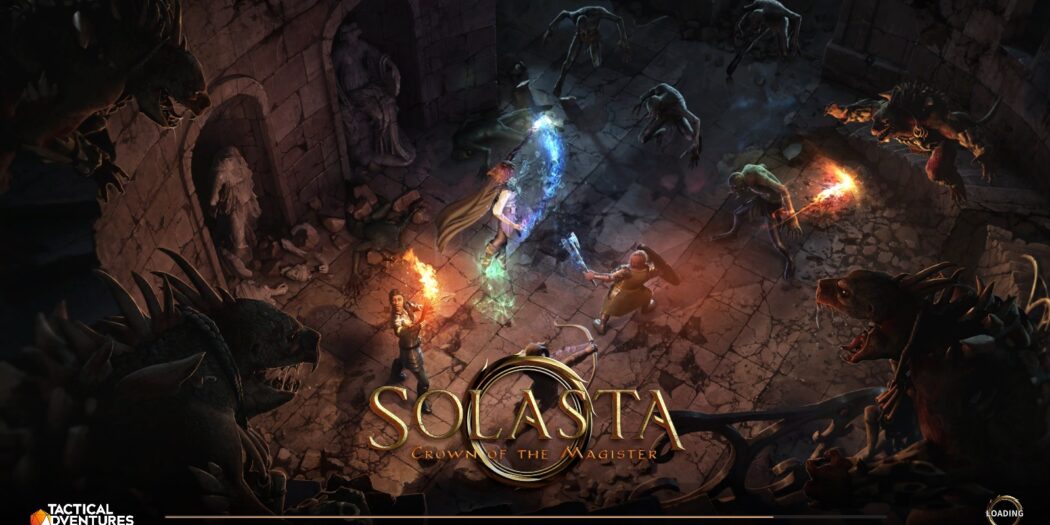 Solasta Crown of the Magister is an early access roleplaying game from Tactical Adventures, based on the Dungeons and Dragons model.

That “Dungeons and Dragons” take is one that generally fills me with dread when I hear it. Not because I hate DnD or anything, but this generally means a gameplay style that tries to blend tactics and randomness, which don’t mix well.

Proudly situated in the same stable as Divinity 2 and Baldur’s Gate, Solasta suffers from a lack of refinement and substance. This review feels more like an impression however, since the game is currently in Early Access.

It is also one of the only early access games I’ve played that I’m interested to see finished. Mostly.

Around a thousand years before the current day, an ancient empire known as Manacalon existed. This empire was ruled by elves and eventually destroyed when a rift opened that brough humans into the world of Solasta. This disaster not only destroyed a magically advanced civilization, but also corrupted the environment around it, turning it into the Badlands.

You take control of a party of adventures, composed of either premade characters or player made ones, that join forces to make some cash working for a council representing most countries in the world. This leads you to discovering a magical crown that may hold secrets to what really happened at Manacalon all those years ago.

Experiencing Solasta’s story left me with mixed feelings. It isn’t bad or anything, it’s just generic. A magical item, a lost civilization affecting the present, a council of countries, these are all things I’ve seen before and Solasta does little to really expand upon them. Pretty much all the worldbuilding takes place in expository dialogue cutscenes that would quickly drift out of my mind as soon as they were over.

A story becomes compelling through three methods: The delivery of the main plot, world-building, and character interaction. Character interaction tends to be one of the more important methods, because it makes the game immersive when characters interact as though they were real people. In Solasta unfortunately, the only characters that interact well are the player made ones.

When you make a character in this game, you get to choose their four personality traits based on their backgrounds and alignment. I highly recommend this option. I started Solasta by making one unique character and picking three premade ones to fill out my party. After a few hours, I simply couldn’t stand the premade characters anymore and restarted.

I strongly suspect that the premade characters had similar personality traits assigned to them, as they would often sound the same. It really pulls you out of the experience when every single person in your party is cynical. Even after making my own characters, however, I only enjoyed a handful of their chats, since most of them amounted to exposition and audience surrogacy.

Basically, what I’m saying is that Solasta’s story is a decent if generic fantasy tale, but the people we experience it through are not in the least bit compelling. There are interesting bits, like the hilariously titled Bone Castle level, but that only takes place around 10-15 hours in. It’s a slow burn, and I’m struggling to remember more than a few moments of it.

Solasta is a somewhat isometric roleplaying game with turn-based combat. For the most part, it is perfectly functional. The randomness of dice rolls, determining if an attack hits or misses, do add an edge of excitement to each fight, but they also bring frustration when a well-planned attack fails because you weren’t lucky enough.

It almost lulls you into a false sense of security by throwing a few crazy easy bandit fights at you early on, only to drop you into a cave a few hours later with super strong lizards. This pattern repeats itself frequently, to the point that I would end up replaying the same fights something like five times until the dice rolls co-operated with me.

Another tip for enjoying yourself more in Solasta, turn off tutorials immediately. EVERYTHING is tutorialised in this game, from the start menu to fights two hours in, which wouldn’t normally be a problem if the tutorials weren’t in the form of text windows that pop up and pause the action. In an already frightfully slow experience, this pace killer can become a deal breaker.

Solasta is a game that gives with one hand and takes with the other. For instance, most of the travel in the game takes place on a giant map, connecting the linear levels to the main hub city. That takes away the slog of traveling from one place to another for an hour at a time, but also takes away the feeling of epicness the world is supposed to inspire.

Keeping items simple, i.e. most longswords are the same, takes away the boredom of having to swap out your items every five minutes. However, it also means that there isn’t a lot you can do to get an edge in fights. Even my favourite feature, picking a character’s personality, means that the game will jumble the dialogue order to compensate for it.

I must call attention to the bugs. Hitboxes would shrink, meaning I had to click on a creature’s right foot with perfect precision to make sure I didn’t attack the thing to its left. Interactable objects would forget they were interactable. I almost gave up on the game when winning a fight in the final level triggered a dialogue that I couldn’t interact with.

To give you a peak behind the curtains here at Brutal Gamer, I have about four pages of notes on Solasta, most of which I couldn’t find space to mention, like the camera getting stuck on things, or the bare bones character creator. All in all, it is a functional, but unrefined experience that doesn’t measure up to its competitors.

Solasta’s art style grows on you. I feel that needs saying, before I compare the characters to PlayStation 2 era claymation dolls, looks and animation-wise. Character’s mouths would stop moving occasionally, making them look like smug telepaths. Their hair looked painted on, and even when it worked, their lips moved in vague relation to their words at best.

That being said, the particle effects on magic were nice to look at. However, the game is not incredibly colourful, and I seriously considered restarting again and making all my characters wizards just to bring some colour to the levels. Some of the environments are pretty, like the underground library, but most are drab mountain landscape or underground caverns.

The sound design is also a bit uninspired, mostly generic fantasy music and fight sounds, but then comes the voice acting. The voice acting is pretty alright for the main characters, and everyone else sounds bored or like they’re in a children’s production of The Witcher. I swear, one of the council members had a different voice every time he spoke to me.

I’ve given Solasta a bit of a hammering in this article, but there is method to this madness. I began this review saying I would be interested in seeing Solasta completed, because there is genuine potential here. So, in lieu of a conclusion, I’ve decided to write a “what I’d like to see” section for the eventual full version.

First off, more character personalities. Building a character’s personality before a game begins is always really nice, but a few more options would help freshen up interactions, as well as giving the game replayability.

Secondly, let’s have a few more classes. An unfortunate failing of Solasta’s dialogue heavy system is that there is little reason to invest in charisma, since it doesn’t help anywhere else.

Having social classes, like the bard, that use charisma even in fights would make ridiculously high charisma checks valid. A cursory glance at the Solasta website showed me the potential for a sorcerer class, which does inspire hope. Finally, some more interactivity in the world. Let me talk to more people, give me more side quests to different places. You built a world that I’d like to see, so please let me see it!

Overall, Solasta is a game with potential, that falls short due to a lack of refinement. As it stands, however, it is a generic fantasy RPG. The story isn’t told well, the gameplay is hampered by bugs and randomness, the visuals and audio are nothing special. It brings nothing new to the table. There are quite a few other games that try what Solasta is attempting, and do it far more competently.

I can’t recommend this game. If you are interested, keep an eye on its updates and check it out when it’s finished, but right now it isn’t worth the price.

Solasta Crown of the Magister

A lacklustre experience that could surprise once the full version is completed. For now, not worth it.

Young, talented, funny, hard working, duck-like, consistently punning, the center of a collapsing star, older than time and weird. He is two of these things. Beyond that, I'll never tell...
Previous DST and Gentle Giant sneak peek their 2021 offerings
Next Trailer: Orc Warchief builds its band on PC