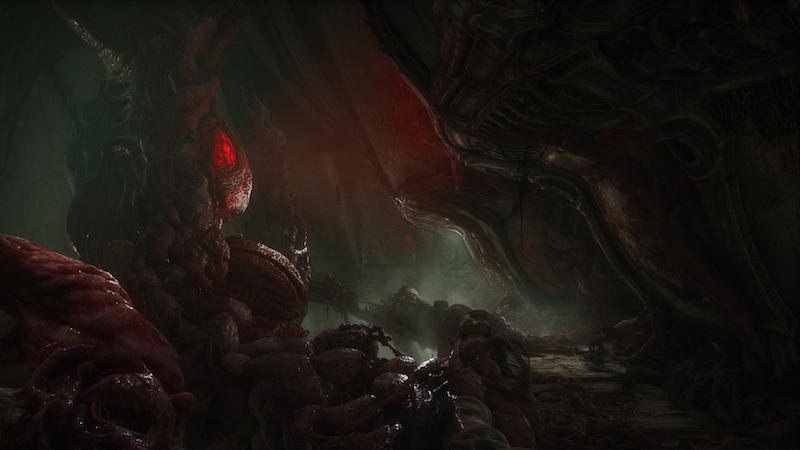 Gruesome shooter Scorn is rolling along. Still in development for the Xbox Series X and PC, the game is looking sharp. Take a peek at it in action.

So, if you don’t know Scorn, you probably should. The game is an FPS that looks wholly original, in probably every way but it’s gameplay. Though to be fair, that seems to have some new edges to it as well. It’s also kind of… gross. Well, it’s gross in a xenomorphic, Alien kind of way.

Scorn’s world is a vile, biomechanical, living hellscape. And of course, you’re plunked right down in the middle of it. To escape, you’ll have to make use of weapons just as disgusting as your surroundings, and battle an army of nefarious creatures.

Scorn was first shown off way back in 2017, but now that same level is back for a whole new look. Check it out in action on the Xbox Series X.

The footage is from a different part of the level revealed previously, and showcases the progress the team has made on the singular experience of Scorn. Gameplay and game systems have been enhanced, with new weapons, animations, environments and creatures added.

The entire environment and every encounter within it are designed to tell a specific story and draw you into the world of Scorn. Initially indifferent to your humanoid presence in the sticky, organic passages they inhabit, the creatures you meet quickly turn hostile if crossed.

According to creators Ebb Software, the above Series X version is on par with “high-spec PC configurations”. Pretty impressive, and it definitely seems like it might be true.

Still, while Scorn has evolved considerably in the time it’s been in development, it’s not ready yet. The game has a release date some time in 2021.

Jason's been knee deep in videogames since he was but a lad. Cutting his teeth on the pixely glory that was the Atari 2600, he's been hack'n'slashing and shoot'em'uping ever since. Mainly an FPS and action guy, Jason enjoys the occasional well crafted title from every genre.
@jason_tas
Previous Titan Comics to launch Blade Runner Origins series
Next Trailer: War Thunder coming to next-gen consoles