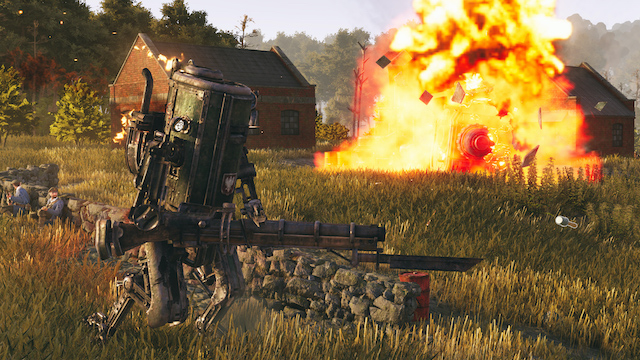 Diesel-punk strategy comes to the PC courtesy of Deep Silver’s Iron Harvest. It’s an alt-reality take on WWI/II era Europe, that kicks the genre right in the gasket.

You might not have realized that diesel-punk was a thing. I sure didn’t, though I also barely know that steampunk is a thing, so maybe I’m not the target market. Then again though, I like pretty much everything about Iron Harvest, a game that carries that label, so maybe I am.

Anyway, Iron Harvest is set in Europe, and starts in between the two world wars. Sort of. See, the universe that frames the action isn’t ours. Instead, it’s an alternate one, where Tesla tech has proliferated, giving the powers that battled it out in WWI the ability to cause death and destruction on a massive scale.

It’s also changed those powers considerably. The major world powers featured in Iron Harvest are Saxony, the Rusviets, and Polania. Little bit of a different angle there than you might be used to, huh?

It’s the 1920’s, and Europe is fresh from a devastating conflict. This wasn’t the World War 1 that you know however. In this global conflict, infantry and grenadiers marched in step with massive humanoid war machines, and nimble scout mechs.

The fallout took many lives, including those in the Republic of Polania. Polania took heavy losses in the conflict, and at the start of Iron Harvest finds itself in an unenviable position.

Underpowered against Saxony (Germany) and Rusviet Empire (Russians, natch’), Polania has brokered a piece deal. As such, they have next to no defenses, which is important since once again the tides of war are rolling, and the two other sides are moving back towards conflict.

Unlike some RTS’, Iron Harvest’s developers King Arts Games have put a lot into the story. It’s fairly deep, with plenty of cut-scenes and tons of dialogue, and branching story elements that tie into in-game secondary objectives as well.

If that sounds like it might weigh down the gameplay, it doesn’t. There are no lengthy animated segments to sit through in the game’s triad of tales. And honestly, it’s good stuff, and even a bit emotional at times. It’s actually kind of odd to see in a game like this, but Iron Harvest pulls it off well.

Mainly, Iron Harvest plays like you’d expect. It’s a real-time strategy game after all, and there’s honestly only so much that you can do with that genre. We’ve already seen RTS’ that focus on base-building, and those that eschew that altogether for pure action. What else is there?

Not too much, though Iron Harvest does a little of both. You’ll find missions here that have you creating command stations for sure, and that includes main bases and outposts. But there are also ones that will have you marching across the countryside, laying waste to enemy positions, and picking up reinforcements as you go.

You can occupy abandoned buildings and houses in those missions, but they’re more focused on keeping on the move. IH presents a great mix between the two styles, and it works to keep play fresh.

In addition to the above, you will also find supply drops to exploit in some maps, as well as mines and refineries to ‘take over’ and use to your own benefit. That’s in addition to something I haven’t seen before in a strategy title – weapon pickups.

Not only will you find hardware in ammo crates dotting some levels, but you can also grab guns off of downed enemies. So you can be fielding a rifleman regiment and take out a series of enemy machine-gunners, then actually equip your men with those heavier weapons. You can even find tool drops, to make your guys into engineers. How cool is that?

Each of the 3 factions has hero characters as well, and a ‘main character’ for its story-arc (told you there was a lot put into the story). That’s the hero that the tale actually follows, and they have special abilities too, some of which can actually be pretty tide-turning in battle. For example, Polania’s Anna has a pet bear (it’s explained) who has medical packs to heal, and can also rip apart enemies to get too close.

Oh, and yes he can be killed, even though he’s super-tough. I know… believe me. But don’t sweat it, he can be respawned like nothing ever happened. That goes for the heroes as well.

Iron Harvest is a very attractive RTS. From the war-torn towns of the countryside to arboreal forests to frozen tundra, Iron Harvest’s graphics are terrific. The engine pumps out a great amount of detail, that really does make the maps feel alive, and like real locations.

In-game elements are deformable too. So when your mech stomps across a town, it actually smashes right through roadside walls, and turns buildings into rubble as it crashes through enemy armor. Maps are decently sized as well. They’re not too massive or too small to feel claustrophobic.

As for the units, they likewise look terrific. The human troops are cool enough, though they’re early 20th century soldiers for the most part. That’s not going to knock anybody over with their coolness factor. What kind of does though, are the mechs that they’re contrasted against. It’s wild to see these WWI troops charging into battle while flanked by massive humanoid or spider-like mechs.

I should also mention here that you have the option to play with characters speaking in their native tongues. So the Saxony characters all speak German, the Rusviet speak Russian, and the Polania speak Polish, though all have subtitles. Now I will also tag onto that, that the actual spoken English vocals aren’t the best, but they’re not terrible either. Actually, they kind of lend to the experience… in a way.

Oh, almost forgot the music! Very quickly – it’s phenomenal. King Arts Games has done a beautifully atmospheric job with it. The score adds to the aesthetic in a major way.

But even though there’s a lot of ‘good’, not everything is perfect.

So what’s not so great?

Remember when I said that the cutscenes were all of the in-game variety? Well that also means that while the hero units look cool up close, the troops all look like clones.

As with all RTS’, different troops are all carbon copies of each other within a unit type. So all of those riflemen that I mentioned look exactly the same. That’s fine in the field of battle, but seeing them up close, while trying to watch a story scene can kind of yank you right out of the moment.

Still, that’s a pretty superficial thing. What isn’t however, is the fact that units can get lost fairly easily in the heat of things. Units can be fairly small when you’re zoomed out, which is my preference. And being that the maps are so impressively detailed, they can blend in.

I had this happen even with smaller mechs, and it was a little annoying. I don’t want to get you thinking that troop management isn’t easy, because it’s as simple as in most other RTS’. Just click the picture of a unit on the bottom of the screen or lasso them with the mouse, and you can command them.

But when you’re trying to stave off a full assault and manage your forces on several different fronts across the map, it can be a royal pain to lose sight of your men. Game-breaking? No. Annoying? Lil’.

Yes, there are a few minor issues here and there with Iron Harvest, but it’s a flat-out terrific RTS overall. I dug almost everything about it, from the excellent campaign to the awesome retro-futuristic designs of the mechs.

Add to that co-op play, online multiplayer, and of course skirmish capability that can get you right into some action, and you have a winner. If you’re a real-time strat fan, don’t sleep on this one.

Are you a classic RTS fan? Are you into the straightforward play that the genre used to revel in? Would you like that with a side-order of new ideas, like the ability to pick up and use your foes weapons? Well add some excellent graphics, awesome music, and a kick-butt story, and you've got Iron Harvest.

Jason's been knee deep in videogames since he was but a lad. Cutting his teeth on the pixely glory that was the Atari 2600, he's been hack'n'slashing and shoot'em'uping ever since. Mainly an FPS and action guy, Jason enjoys the occasional well crafted title from every genre.
@jason_tas
Previous Loot Crate unveils new Destiny Crate for quarter 3
Next Raji: An Ancient Epic (Switch) Review