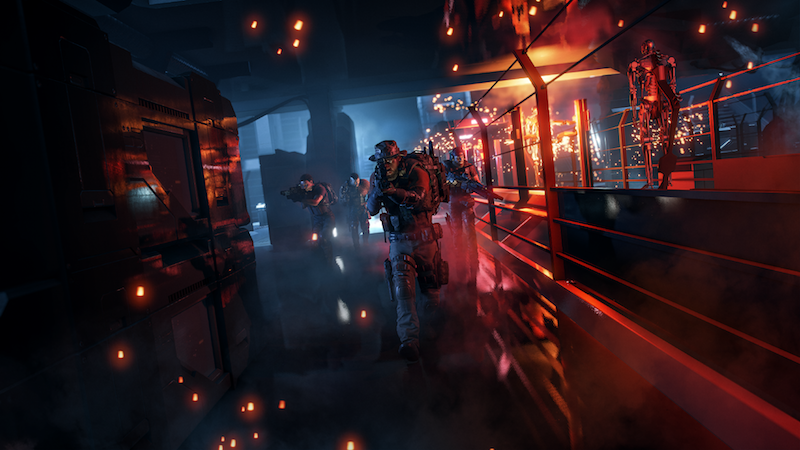 Not a dream, not an imaginary story! This is the crossover you never thought you’d see! Ghost Recon Breakpoint is getting Terminators.

Apparently more companies than just NetherRealm were thinking that 2019’s Terminator: Dark Fate was going to be a hit. Of course, it was anything but that. The movie bombed at the box office, continuing what’s been a line of post-T2 movies that’ve all been flops.

But that didn’t stop Arnold Schwarzenegger’s T-800 from appearing in Mortal Kombat 11. And it won’t stop the upcoming DLC for Tom Clancy’s Ghost Recon: Breakpoint either.

What’s actually pretty cool about this particular content though, is that it’s not tied into Dark Fate. It actually plays off of the very first Terminator movie, from way back in 1984, and creates an original story.

The dlc features a pair of missions, both taking place in a new part of the game’s fictional country of Aurora. There the Ghosts will team up with time-travelling Rasa Aldwin, and face off against a temporal incursion of the original Skynet killers.

Playable in both solo and multiplayer modes, completing the missions will net you a bunch of cool stuff. That includes new gear, and even the ability to re-skin your character as Kyle Reese or the Terminator.

While the bonuses sound like they can only be obtained during the special event, the levels will hang around. So you’ll be able to play ’em later and also “face the challenging T-800 cyborgs in daily warfare and interception missions”. Kind of cool that.

The pack is free, and a part of an ongoing effort to improve Breakpoint, and offer new content. Apparently Ubisoft is taking player feedback into account in a big way as the game continues to evolve. That’s nice to see, since it got a somewhat chilly reception at launch, even though it was looking good in previews.

Ghost Recon: Breakpoint is available now for the Xbox One, PS4, PC, and Google Stadia. The Terminator event is scheduled to run through February 1st.

Jason's been knee deep in videogames since he was but a lad. Cutting his teeth on the pixely glory that was the Atari 2600, he's been hack'n'slashing and shoot'em'uping ever since. Mainly an FPS and action guy, Jason enjoys the occasional well crafted title from every genre.
@jason_tas
Previous Warcraft III Reforged wages war on PC and Mac today
Next One:12 Collective Wonder Woman (Action Figure) Review