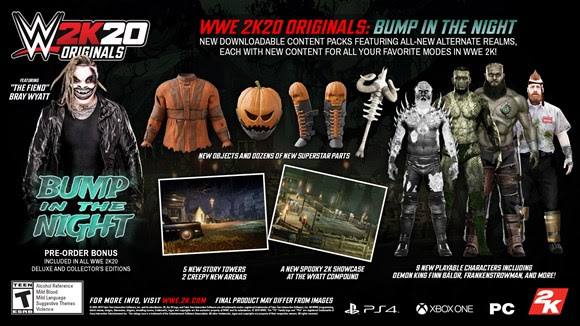 The latest WWE wrestling title from 2K has not been without its issues, but a new infusion of creepy Halloween content might make fans smile.

Yes, WWE 2K20 has some problems. Well, it had some anyway, though I’m sure there are more floating around. The game was reportedly quite glitchy in some amusing ways upon launch, though that was only one issue fans had with it.

Now though, there have been some fixes issued, as well as a dose of seasonal DLC. A pre-order bonus for the standard version of 2K20, as well as included in both the Deluxe and SmackDown! 20th Anniversary Edition versions of the game, Bump in the Night actually includes a good deal of stuff.

That’s a good thing too, since the pack is $14.99 USD for anyone who doesn’t have the Season Pass, or had 2K20 pre-ordered. Scroll down to see what’s included.

Add the most unsettling Superstar in WWE to your WWE 2K20 roster!

An alternate “Swampfather” version of Bray Wyatt has amassed otherworldly power, becoming an embodiment of the swamp itself. He lures Finn Bálor to his compound to recruit Finn’s Demon into his group of powered Superstars, which he calls his “Family.” Finn is forced to fight in a series of matches against members of Wyatt’s Family until finally, the power within Finn Bálor is unleashed. Exclusive commentary brings the story to life.

Jason's been knee deep in videogames since he was but a lad. Cutting his teeth on the pixely glory that was the Atari 2600, he's been hack'n'slashing and shoot'em'uping ever since. Mainly an FPS and action guy, Jason enjoys the occasional well crafted title from every genre.
@jason_tas
Previous Jumanji: The Video Game gets Limited Run collector’s edition
Next Bossa Studios Want YOU To Choose Their Next Game