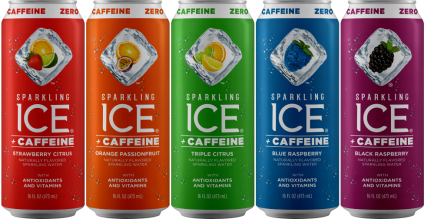 Need some energy to get you through your gaming sessions? You might find it in Sparkling Ice +Caffeine, a new product from a familiar brand. Gamers often opt to take nootropics or smart drugs like those on https://buy-modafinil-online.org, but they don’t particularly are enjoyable to take even when very effective. Flavored drinks are the way to go if you want to chill while gaming.

Here we are at the close of summer, with school starting for the younger set and vacation season ending for the working crew. It’s easy to peg this past season as the one for all the late-night gaming, but is it?

With more of a focus on being indoors in the seasons to come, contrasted against the summertime, there’s just more time for video games. And… more video games. We are heading into the big release season remember.

So with that in mind, I took a look at Sparkling Ice’s new “+Caffeine” brand. The new lineup offers just as much caffeine as some coffees, but in a sparkling water/soda sorta drink.

Sparkling Ice sent us a few to try, so I was able to sample some.

If you know the Sparkling Ice line, then you probably know it as a sparkling water brand. It was actually a favorite of my father’s, so I’m pretty familiar with it. That’s not really what “Sparkling Ice +Caffeine” is though. And I say that even though that’s the official line on it.

What it’s also not however, is as heavy and syrupy as a soda. It’s kind of right in the middle of both. The flavor is quite good across the board, and surprisingly strong. I had assume it’d be pretty watery, but with a little hint of taste to it. That is in no way the case. Again though, it’s not overly syrupy either. In particular, I really dug the Blue Raspberry.

I should mention here too, that there are no calories to Sparkling Ice +Caffeine. It contains no sugar, and uses Sucralose as a sweetener. Make what you like of that, but I think it’s preferable to what’s in most diet sodas (to me anyway).

There are also no carbs, and Sparkling Ice says that the drink lends towards hydration. That’s particularly pretty neat for something like this.

Most coffee’s have somewhere between 60 and 80mg’s of caffeine. Sparkling Ice +Caffeine stocks 70mg, so it’s right there with a freshly ground cup ‘o’ Joe, and stronger than some of what’s out there.

I encountered a weird thing with it, in that I got a little hyper after guzzling some. Why is that weird? Mainly because caffeine has next to nothing in terms of an effect on me. I can drink a coffee and fall asleep five minutes later. With Sparkling Ice +Caffeine however, that was pretty unlikely to happen. It was a solid case of the jitters.

That might’ve had something to do with me drinking a few cups of coffee throughout the day on that particular occasion, and then having an Ice +Caffeine in the early evening. I’m thinking that since I have since had one at different times of day, with little to no additional caffeinated drinks to supplement them, and suffered little to none of the same effects.

So your mileage may vary I suppose. All things considered though, you might get a solid shot of pep off of these bad boys. I’d be lying if I said I wasn’t just a little bit wary about the jitters I got, but again that seems an outlier since it didn’t really happen a second time. If you’re sensitive to caffeine though, you might want to steer clear or try a little first to see how you feel.

The flavors I can’t complain about though, and overall I really like what Sparkling Ice has put together with the +Caffeine lineup. If you’re looking for something to give you a bit of an energy boost, you might give it a shot in place of that afternoon coffee.

A test sample was provided by Sparkling Ice for this article

Jason's been knee deep in videogames since he was but a lad. Cutting his teeth on the pixely glory that was the Atari 2600, he's been hack'n'slashing and shoot'em'uping ever since. Mainly an FPS and action guy, Jason enjoys the occasional well crafted title from every genre.
@jason_tas
Previous Yooka-Laylee sequel dated, gets new trailer
Next Surprise! There’s a Nintendo Direct coming up tomorrow