Replacing the recently cancelled run is Star Wars: Vader – Dark Visions. And this new mini-series sounds all kinds of strange. Vader as a… hero?

Is there a villain as celebrated in Star Wars as Darth Vader? No, probably not. There’s good reason for that of course, since Vader is pretty easily the coolest bad guy in the Galaxy Far, Far Away. No Star Wars villain has even come close to being as all-around awesome as Anakin Skywalker’s Sith persona.

Though now, it seems we’ll be getting an alternate look at the big guy, and seeing him in something of a new light. Replacing the planned-then-cancelled, seemingly more traditional book, will be Star Wars: Vader – Dark Visions. And this new mini-series is set to show a potentially very different side of Vader.

Even calling him an anti-hero is a stretch, but the new mini from Dennis Hopeless and a rotation art talent goes one step further. Vader as “someone’s greatest hope”? Huh? 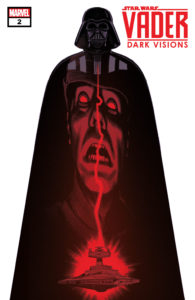 Have a look at the official preview below

Who is Darth Vader? You’ve known him as a symbol of power, a villainous commander, and a Sith Warrior. But this March, get ready to see a side of Vader you’ve never seen before – and a side that the galaxy has never seen before!

The limited series begins this spring, in a story that will shed a new light on the many sides of the galaxy’s greatest villain.

Jason's been knee deep in videogames since he was but a lad. Cutting his teeth on the pixely glory that was the Atari 2600, he's been hack'n'slashing and shoot'em'uping ever since. Mainly an FPS and action guy, Jason enjoys the occasional well crafted title from every genre.
@jason_tas
Previous Trailer for LEGO Aquaman DLC arrives along with the expansion
Next Double Dragon II joins the Switch’s Arcade Archives series today