The Beatles Yellow Submarine comic is a retelling of the psychedelic, fun, surreal Beatles animated movie of the same name.

The comic celebrates the 50th anniversary of the The Beatles Yellow Submarine’s movie debut. The abstract pop-art style, Beatles references, and wonderful humor should bring a smile to any reader even if they aren’t a Beatles enthusiast (I never watched the movie and I enjoyed this comic). 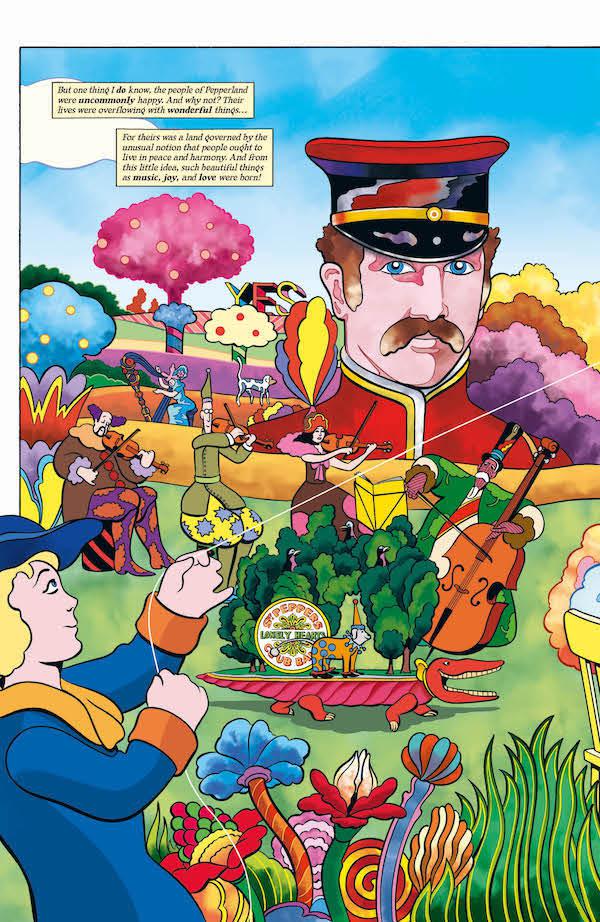 The music, joy, and peace hating Blue Meanies have invaded Pepperland which lies 80 thousand leagues under the sea. With his troops, His Blueness, leader of the meanies, attacks Pepperland and silences Sgt. Pepper’s Lonely Hearts Club Band. Young/Old Fred, is sent by the mayor of Pepperland to find help in the Yellow Submarine. Fred travels to Liverpool where he finds Ringo who leads Fred to the other Beatles members. They agree to help Fred and are led on a fantastical, whimsical journey to Pepperland to stop the Blue Meanies. 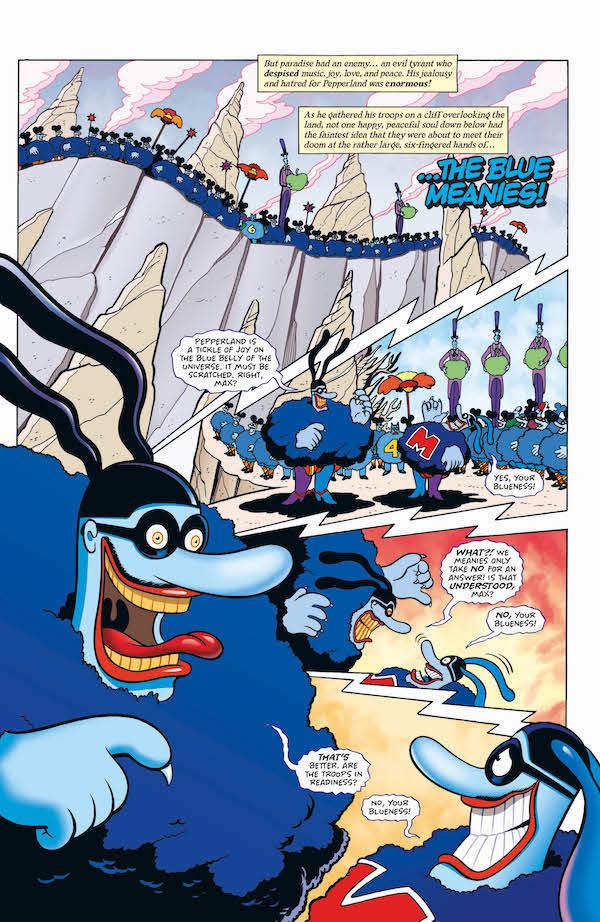 The whole band features in the comic: Ringo, John, Paul, and George. Their various antics, jokes, and out-of-the-box thinking help them in their journey to Pepperland.

Fred, the aging sailor, (referred as Young Fred by elders and Old Fred by those younger) with the assistance of The Beatles tries his best to pilot the Yellow Submarine. He acts a bit more sensible than everyone else which leads him to question the actions of those around him when they seemingly don’t make sense such as when the Lord Mayor continues playing music despite the impending Meanie invasion.

His Blueness is the leader of the Blue Meanies and rules them like a dictator. His crazy ruling and malevolent nutjob characterization are hilarious. He often abuses Max, his subordinate, in old-school villain fashion.

A mixture of a bunny, clown, bear, this odd Nowhere Man rhymes his way throughout the comic. He is studious and has many achievements but is also terribly lonely and joins the Beatles’ crew at Ringo’s invitation. He helps the crew throughout their journey. 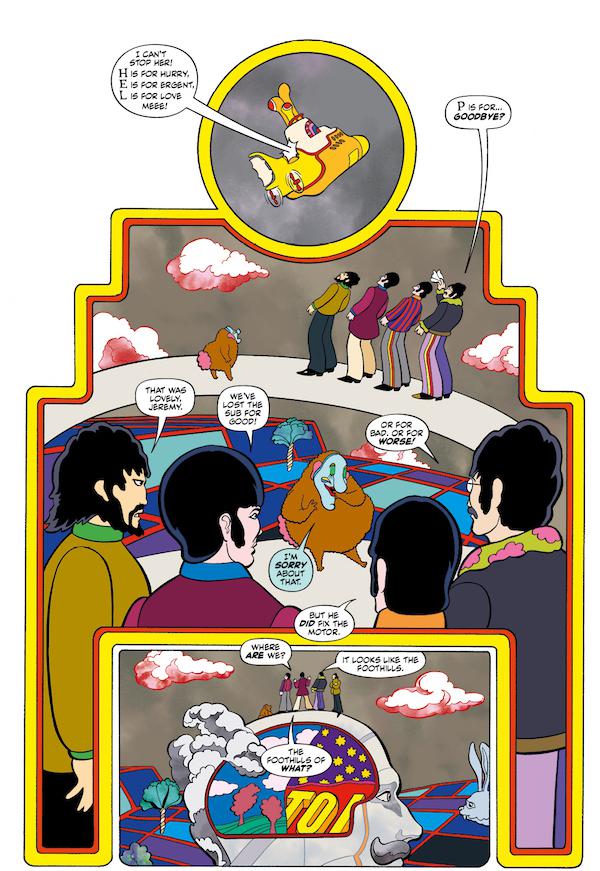 Oh boy, the British humor is strong with this one. The writing reminds me of Monty Python with weird joke setups, plays on words up the wazoo and using the abstract nature of the comic to pull the spoken word across page spreads. I actually laughed out loud multiple times at some of the jokes. I don’t know if it’s good or bad since I love both terrible puns and well-thought-out jokes. It’s beautiful really.

One would expect to try to follow the speech bubbles across weird layouts to be quite a difficult thing but it is masterfully done often to humorous effect. As the crew travels all over the place across organic panels the dialogue follows along swimmingly. Each Beatle member is given ample talking time and Ringo ends up being the key instigator to a couple weird situations.

The groovy, simple style fits the bill of the Yellow Submarine’s original aesthetic. The colors are usually solid, bright and fun with backgrounds having watercolor gradients. The panels are used creatively. They create silhouettes of shapes (such as the Yellow Submarine itself), emphasize kinetic actions and can even help set the tone of the scene such as being rounded for calm or edged for excitement. The panels themselves work a great deal in keeping the reader entertained and definitely support illustrating the story.

Character designs are clear and recognizable and are straight out of the 60’s. The lettering is great as it shows all tones of dialogue giving certain characters their own fonts or colors. Every sound effect in the pop-art comic style where the colors are never out of place with the surrounding art.

The Beatles Yellow Submarine is a chuckle-inducing, artistic homage to the film of the same name. Fans of all types will enjoy reading it and marveling at the abstract, psychedelic nature of it. Whether you’ve watched the film or not need not apply! All you need is love!

We all live in a Yellow Submarine

A deep dive into a piece of Beatles history, the comic revisits a beloved film of Beatles fans and critics alike in a new format and does a great job!

Megan here! I am pretty well versed in all things weaboo and geek. I've loved videogames since I was born and even made my own for my 3rd year of Multimedia at the University of Pretoria in sunny South Africa. I have enjoyed anime from the days when Pokemon was considered satanic and Aniplex used to exist on DSTV. In the past couple years I have really gotten into manga, particularly Berserk to see where the story headed after the original anime. If there's one thing I will always love 110% it is cats. Don't doubt my faith in my love for felines.
Previous One61 Batman Smartwatch (Gear) Review
Next The end of an adventuring era – a look at Telltale Games’ closure