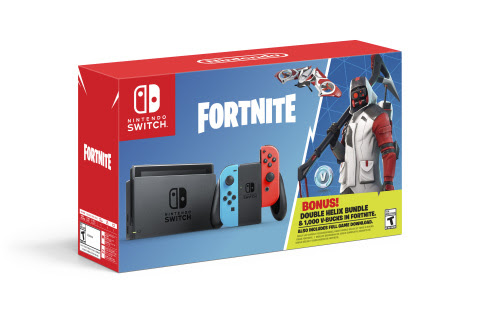 Nintendo is going hard with Fortnight heading into the holiday season. The game will be packed with Switch systems in the Double Helix Bundle.

The game of the moment

In Fortnite on Nintendo Switch, jump in to be the last one standing in a high-stakes game of 100-player Battle Royale. Build huge forts. Outwit your opponents. Earn your Victory Royale. Squad up together online with friends in the same room or around the world. Regular updates to the game add fresh gameplay modes, outfits, weapons and items to Fortnite, such as the upcoming Season 6 content.

Is there a bigger hit right now, anywhere in the world, than Fortnite? The multiplayer shooter seems to have caught fire, and rapidly ascended to the top of the gaming heap online. And with the Switch version, gamers can of course play anywhere they like. That… could be dangerous for productivity.

But in any event, well aware of all of this, Nintendo has bundled it up with Switch consoles. The new set is called the Double Helix Bundle, and will debut on October the 5th at retail. With a price tag of $299.99 USD, the set will include not just the console.

The game itself is free on the eShop, but prospective Switch games swill also find some extra goodies in the box. Included will be “1,000 V-bucks (in-game Fortnite currency) and the Double Helix Set”. What’s in that? Well…

Nintendo points out that the V-Bucks can be used to purchase a Battle Pass as well. Or, if you’re not into that, you can use it to unlock a selection of in-game content too.

Jason's been knee deep in videogames since he was but a lad. Cutting his teeth on the pixely glory that was the Atari 2600, he's been hack'n'slashing and shoot'em'uping ever since. Mainly an FPS and action guy, Jason enjoys the occasional well crafted title from every genre.
@jason_tas
Previous Sega Genesis classics landing on Nintendo Switch this winter
Next Ball without limits next month in NBA2K Playgrounds 2