Quarto Publishing’s Star Wars Smuggler’s Guide: Notes from the Underworld is set to shed light on some dark alleys this October.

Star Wars is usually all about light vs dark, Jedi vs Sith. But as in any universe there is a whole mess of grey in the galaxy far, far away. That’s the subject matter for Star Wars Smuggler’s Guide: Notes from the Underworld.

The Smuggler’s Guide is a part of the Secrets of the Galaxy series of books. It’s crafted to read like an actual relic from the Star Wars universe. 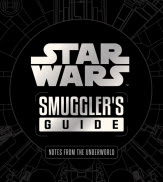 Recovered from a strong box on the Millennium Falcon, Star Wars™: Smuggler’s Guide traces its own extraordinary journey through such notorious characters as Maz Kanata, Hondo Ohnaka, Dryden Vos, Lando Calrissian, and Han Solo. Explore previously unknown details about the underhanded dealings of the galaxy’s underworld.

The lengths to which the underworld will go for a legendary prize is unparalleled. What started as a simple logbook with a piece of valuable information was soon stolen, traded, and smuggled around the Outer Rim and shady ports. With each pirate, thief, gambler, and criminal who took possession of the book, new insight and details were added, creating the Smuggler’s Guide—a coveted collection of hidden treasure locations, advice, and hard-earned data.

Quite frankly, that sounds awesome. As cool as it is, it’s also pretty expensive, so this might be one for the holiday wish list. Star Wars Smuggler’s Guide: Notes from the Underworld lands exclusively on Amazon on October 30th. It will run you $30 USD.

Jason's been knee deep in videogames since he was but a lad. Cutting his teeth on the pixely glory that was the Atari 2600, he's been hack'n'slashing and shoot'em'uping ever since. Mainly an FPS and action guy, Jason enjoys the occasional well crafted title from every genre.
@jason_tas
Previous NYCC 2018: Mezco Toyz’ fall exclusive is classic Dr. Strange
Next A Cable-less X-Force returns, and they’re out for vengeance