Superior Spider-Man to return in new ongoing this December

Doc Ock is gone, and Otto will be once again donning the red and black to become the Superior Spider-Man. This time it seems he’ll be trying to outdo Peter rather than become him.

Well, here we are. Again.

The latest clone saga gave the Marvel Universe Doctor Octopus back once again, after he was “killed off” at the close of the Superior arc. It was something that I definitely liked, since Doc Ock is arguably Spidey’s greatest foe, and his rogues gallery just wasn’t the same without him. Also, I didn’t care for Superior Spider-Man.

While I think most Spidey fans who felt the same would probably say that they didn’t like Superior because it wasn’t the “real” Peter Parker, I didn’t like it mainly because I like Ock so much. He’s a great villain who’s a legit classic. And again, one of the best Spider-Man has. The returned version might not have been as cool as his iconic form, but at least he was back. Now he’s set to disappear again.

For some reason we’ve yet to learn, Otto will be leaving behind his purely villainous form to once again become Superior. The book will dawn in December with a fresh #1, and come from the team of Christos Gage and Marvel-exclusive artist Mike Hawthorne.

“I’m more than thrilled to renew my exclusive with the folks at Marvel,” Hawthorne said. “I want to emphasize folks’ here, as I think we often talk about Marvel as this big entity that just makes things happen. Marvel, to me, is the people that work day in and day out to try to make the best comics they can. They’re the ones that keep me coming back. I’m ecstatic to dedicate the next few years of my creative energies to adding to the Marvel Universe!” 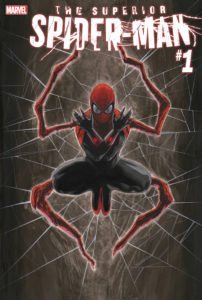 That’s a lot of Spider-Men

With Superior Spider-Man, that’ll mean that there are no fewer than five Spider-Men running around in the Marvel U. Spidey of course you know, but there there’s also Ben Reilly. Kaine, Miles Morales, and now Otto Octavius.

It’s possible that the Spider-Geddon event will whittle that number down a little, but as of right now it seems like it’s just too many Spideys. So could that mean that Otto won’t be a Spider for all that long? Well, Marvel does tease that Otto’s brush with Spider-dom might not end well.

Cross your fingers, I guess.

Under the spectacular storytelling of Gage and Hawthorne, Otto will prove (one way or the other) that he’s the most effective Super Hero in the world! And if you think you’ve already read the most intense Superior Spider-Man story? Think again. This is a tale like none other!

“I had the great pleasure of collaborating with Dan Slott on his incredible Superior Spider-Man run, and I can’t wait for people to see this new chapter in Otto’s journey toward… redemption? Corruption? Triumph? Tragedy? That remains to be seen,” Gage shared with Marvel.com. “What I can tell you is that the appropriately superior artistic team of Mike Hawthorne, Wade Von Grawbadger, and Jordie Bellaire — titans of their field, all — are absolutely killing it on the art.”

Jason's been knee deep in videogames since he was but a lad. Cutting his teeth on the pixely glory that was the Atari 2600, he's been hack'n'slashing and shoot'em'uping ever since. Mainly an FPS and action guy, Jason enjoys the occasional well crafted title from every genre.
@jason_tas
Previous Marvel’s Spider-Man spins his web on the PS4 today
Next SNK’s Samurai Showdown returns – Samurai Spirits coming in 2019