The second Harbinger Wars has come to an end, and Valiant says that this “Aftermath” issue wraps up what’s been their biggest crossover event yet.

Valiant is proud to present another peek within the pages of HARBINGER WARS 2: AFTERMATH #1 before the seismic standalone epilogue hits stores on September 26th! Eisner-nominated writer Matt Kindt (X-O MANOWAR, Mind MGMT) has broken down the Valiant Universe in its biggest, most brutal event ever published… Now, he and legendary comic artist Adam Pollina (X-Force) will begin to rebuild! 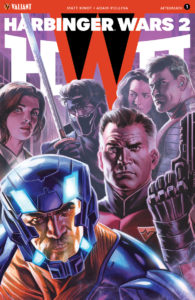 The power’s back online and the fighting is over…but who are the real victors of HARBINGER WARS 2, and what was truly lost in the carnage? For those who survived the terrible onslaught – and who must now witness the devastating aftereffects of their actions – will there ever be peace again?

Plus: Don’t miss HARBINGER WARS 2 #4, out in stores today! At last, the final battle by New York Times best-selling scribe Matt Kindt and superstar artists Tómas Giorello (NINJA-K) and Renato Guedes (SHADOWMAN) has begun – and no one will get out unscathed!

Jason's been knee deep in videogames since he was but a lad. Cutting his teeth on the pixely glory that was the Atari 2600, he's been hack'n'slashing and shoot'em'uping ever since. Mainly an FPS and action guy, Jason enjoys the occasional well crafted title from every genre.
@jason_tas
Previous Entertainment Earth Marvel & DC wooden figures (Toy) Reviews
Next The Walking Dead’s Greg Nicotero signs on with the new Spawn movie