Home / Comics / The original Defenders returning to the Marvel Universe

The original Defenders returning to the Marvel Universe

Doctor Strange, Hulk, Silver Surfer, and Namor are back. Marvel is relaunching the original Defenders in a series of new books.

One of Marvel’s lesser known teams, The Defenders were still a force to be reckoned with. Much more so than the more current team, which saw street-level heroes like Daredevil and Luke Cage on its roster.

This new team though, is all power.

Doctor Strange. The Immortal Hulk. Namor the Sub-Mariner. The Silver Surfer. You know their names and you know their powers…and you know them as the DEFENDERS! This December, Marvel’s favorite non-team – the original Defenders – return in all-new stories!

Just what “stories” means is a question. Marvel is promoting a series of one-shots, culminating in a group-based single issue. Will there be more? We don’t know right now, though Marvel is hinting at the possibility. 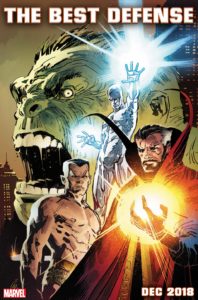 They’re telling fans to “stay tuned to Marvel for more information”. Right now though, we know that the following are on the way for this December.

Jason's been knee deep in videogames since he was but a lad. Cutting his teeth on the pixely glory that was the Atari 2600, he's been hack'n'slashing and shoot'em'uping ever since. Mainly an FPS and action guy, Jason enjoys the occasional well crafted title from every genre.
@jason_tas
Previous PAX West: Bethesda brings TESO, Blades, Rage 2 and more
Next Marvel’s Conan gets a creative team, covers from Esad Ribic