If you were gaming in the 90s, then you know all about Earthworm Jim. Now his spiritual successor is here in the form of Doug TenNaple’s Bigfoot Bill.

From Earthworm to Bigfoot

I don’t think Earthworm Jim needs much of an introduction. The side-scrolling (turned 3D) comedic hero is still well known today, from his days on the SNES and Genesis. Doug TenNaple however, might need a little background.

If you don’t know TenNaple, he’s the creator of Jim, and yes that means he was the designer of his iconic look too. But developer Shiny’s classic series is far from all that he’s had a hand in. TenNaple also has games like The Neverhood and Armikrog among his credits. And Bill here isn’t even his first comic. He’s also done stuff like Gear and Ghostopolis, to name a few.

What Bill does represent though, is apparently a story that he’s excited to see completed. And as you can see from the art, it’s very much in the flavor of his most famous creation. 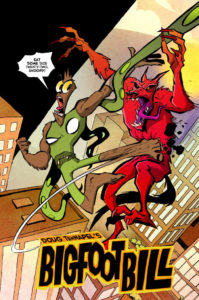 Here’s a bit from the campaign:

As a big thank you to fans of my work I created BIGFOOT BILL, a childish, hairy, legend who stole the KRAKEN from POSEIDON and wears it as a super suit! I’m forgoing my usual studio work to work directly with my readers to independently fund an all-ages, blockbuster graphic novel!

Are you tired of humor comics that are more gross than funny? Me too! Do you like characters drawn with more skill and impact than ugly ca-ca that is made these days? Me too! Are you frustrated that I can’t touch any of my big studio characters yet the big studios won’t do anything with them? This is how I’m going to maintain control of BIGFOOT BILL, by making him independently with no studio involvement. That means I need you to help me make this graphic novel. It’s time to release the Kraken!

Bigfoot Bill is planned as a 48 page graphic novel, with cardstock cover. Every copy will be autographed, which is pretty nice. Bonuses include sketchbooks and more, depending on how much you plunk down when you order.

You can take a look at the campaign here on Indiegogo. As of right now, it’s sitting at 133% backed (so it’s gonna happen) with about a month left. I don’t know about you, but I find those numbers pretty impressive. It’ll be interesting to watch and see if it follows in the footsteps of some of the other indie books that’ve been blowing up on Indiegogo. Right now, it certainly looks like it will.

Jason's been knee deep in videogames since he was but a lad. Cutting his teeth on the pixely glory that was the Atari 2600, he's been hack'n'slashing and shoot'em'uping ever since. Mainly an FPS and action guy, Jason enjoys the occasional well crafted title from every genre.
@jason_tas
Previous Playing Catchup: Torchlight 2
Next Daniel Bryan to feature in WWE 2K19’s 2K Showcase mode