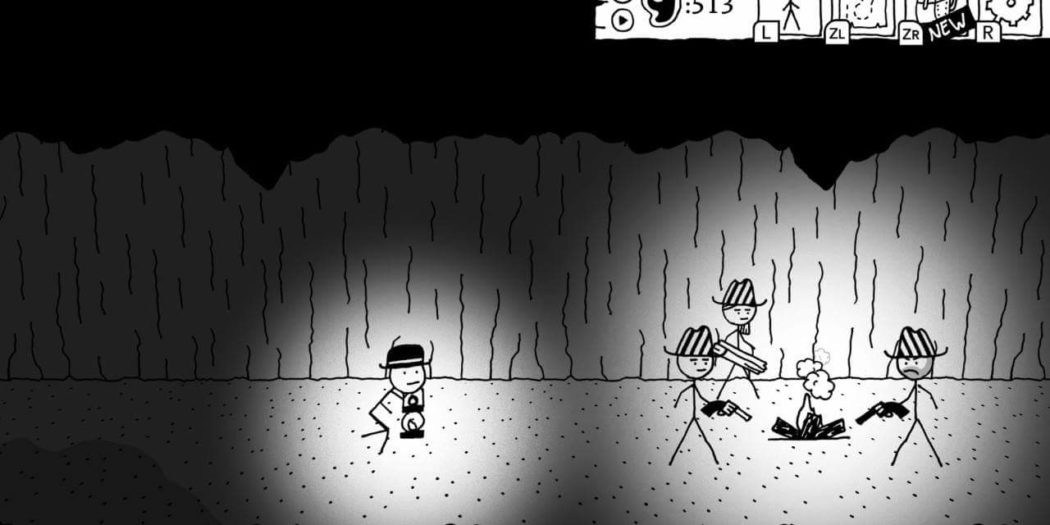 A slap-stick RPG that looks great on paper- because it’s stick figures and jokes. It works just as well as a game.

West of Loathing is a game about exploring the wild west, helping people, and fighting hippies. Cows have come from hell with a vengeance, and its time for your hero (whose name is generated at random) to leave the homestead and hit the frontier.  Pick a class. Spit a wad of tobacco. And get your journey started. 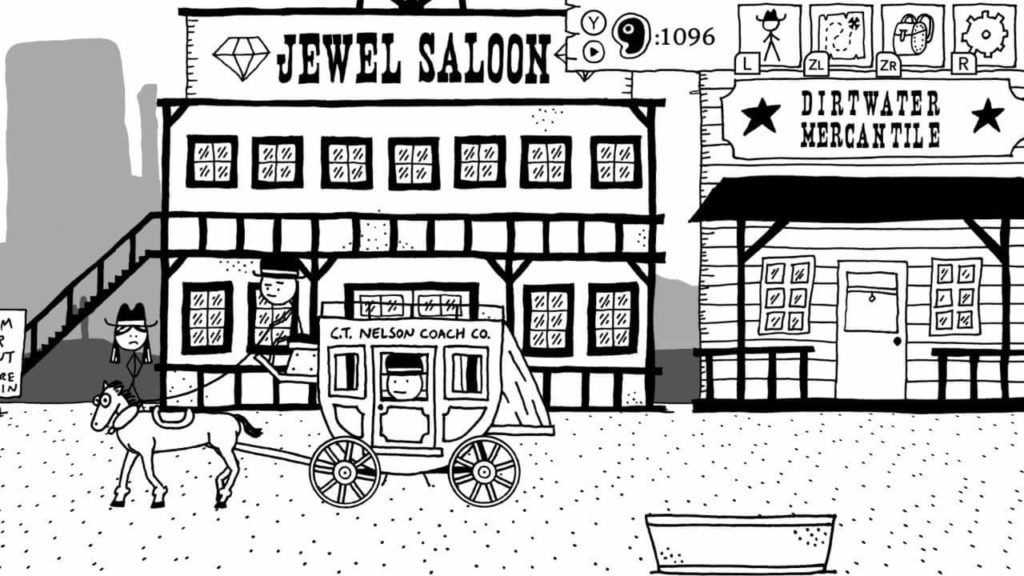 West of Loathing is an RPG with a lot of reading.  And RPG mechanics. It has an awful lot of those. The stat page looks like something out of Divinity, with stats for Mysticality, Muscle, Moxie, Grit and Girth (I may have made the last one up), and a lengthy list of passive and active skills that only grows longer as you eat and drink and otherwise be merry. And angry.  You’ll be angry a lot.

Because that’s the way the game deals with death.  If you lose a battle, you’ll become angry, increasing your stats.  Your next battles will be a little bit easier, but if you die again, you’ll get so angry you’ll pass out.

The game can level your character for you, or you can take your destiny into your own hands and wrangle a stat page from whence the cows came. The game does a pretty good job at keeping you balanced, but I found living life on the edge with all my points thrown into a couple skills and one stat to be the spice of life. 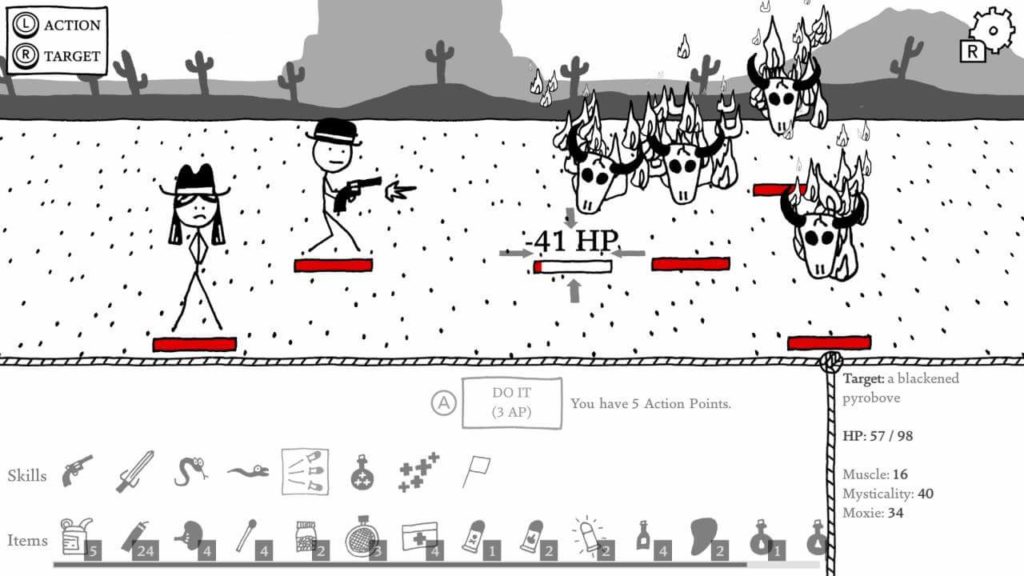 Battles are pretty basic.  Everyone is on a grid- usually you and your pardner against cows, snakes, clowns, or other typical RPG enemy types.  You have two different types of attack. Melee attacks can hit people even if they’re behind cover, while you can’t shoot those who are hidden behind friends (or blockade). You can spend your Action Points to use powerful skills, but you won’t get those points back for the rest of the battle (short of using an item).

And when the cows come home, you’ll be using a lot of items.  Pre-battle, you’ll stuff your face with as much food, drink, and potion as you can fit, each granting you stat boosts (higher speed, more AP, etc.) for the rest of the day (which ends if you pass out from bristling too much). In battle, you’ll be armed with unique bullets, med kits, snake spleens, and dynamite, and using any doesn’t take a turn.  In fact, you can, if it means saving your hide, use all of your items before you attack. You’ll need to, if you mucked up your character’s specs or accidentally walked right into the middle of a circus of bovine-busting clowns.

And once you go, your pardner can go, and- well, if you’ve played a turn-taking RPG before, you get it. For the most part, I found myself having an easy time of things, especially if I used my supply of items, but there were definitely times I had to be carried home because I overestimated my gun-totin’ cowboy. 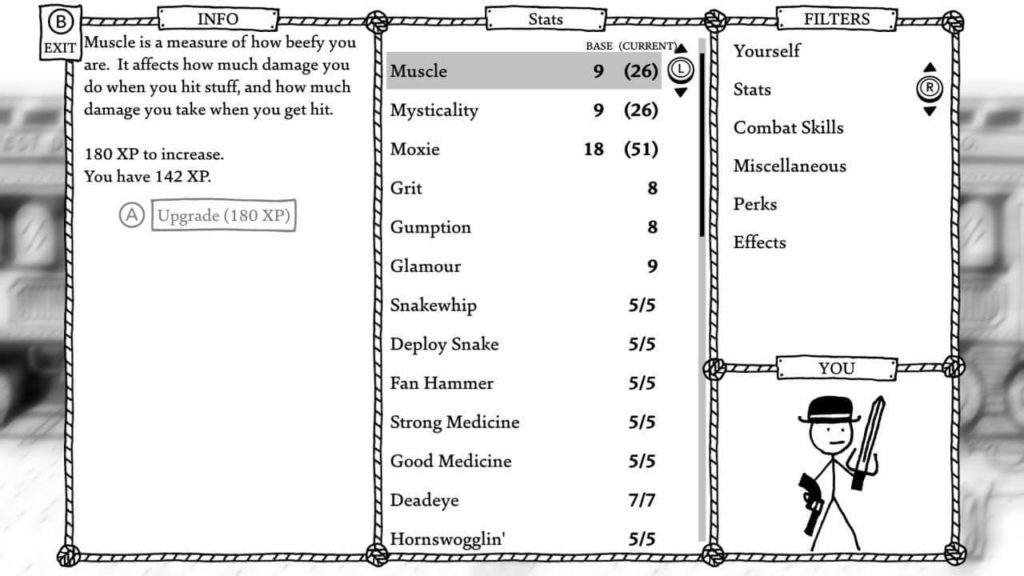 The game’s pretty generous about it all. Check every nook and cranny, savor every joke, and do everybody favors and you’ll find yourself well-equipped.  It also helps to grind at fountains of eternal snakes. Once I did so for a couple hours, though, I found that the rest of the game didn’t have anything remotely resembling a challenge remaining. I’m not sure if it’s because I talked my way out of every situation (always an option if you speak goblintongue or can hornswoggle with the best of them) or if it’s because the game just wasn’t prepared to handle my maxed abilities and sky-high stats. About halfway through the game, before I crossed over them mountains, I never died or faced risk of failure again.

Exploration in West of Loathing is pretty basic.  You select your destination on a gradually filling in map, and probably get distracted on the way by another pun, place, or problem. The areas themselves, when you arrive, are filled with things to find, strange items to collect, and undead to make dead.

West of Loathing gives its side quests value by making them all, in one way or another, a part or a culmination of a punchline.  The game is a comedy (sometimes darkly so), and the comedy drove me into the late hours of the night. My horse is crazy, his eyes whilring in his sockets and his neigh is a bizarrely endearing approximation of the sound. I tried to help a man cactus hook up with a woman cactus. I repaired a piano-player. I fought a host of Daves in a graveyard of tombstones for other Daves. 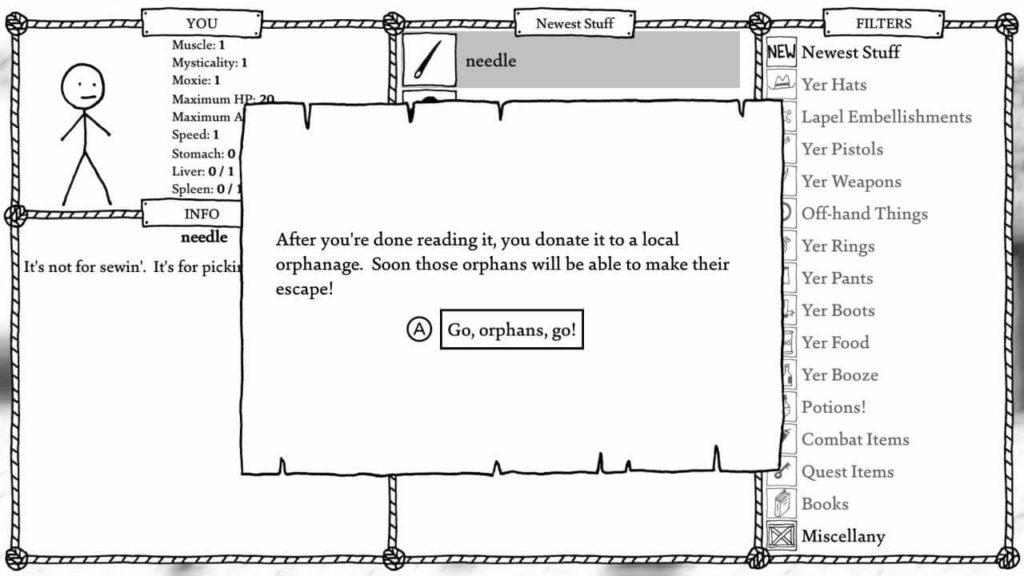 Frankly, there’s not a single thing you’ll do that isn’t funny, in some way or another.  If not laugh-out-loud so, it’s all at least worth a chuckle. Or a snort. It’s not an easy thing to keep up for an extended period of time (like, over, say, the course of a 10 hour RPG), but West of Loathing succeeds in that it is constantly presenting new methods for delivering its humor, whether in dialogue, puzzle-solving, or general exploration.  The details are staggering Bump a cactus and your character will say “ow”; wait in a poker room, and somebody will pull out a gun, rob his opponent, and then continue playing (or everybody will engage in a good ol’ Mexican standoff); fail to heed a sign about a giant spider being released if anyone ever opens a door (and don’t you do ti!) and a giant spider will be out there.  Waiting.

The aesthetic ties into the humor fantastically. Everything is black and white (and looks great in handheld mode or on the TV) because all the characters are stick figures. The music matches or elevates the current gag (and will be spooky to match the darker, or at least stranger, comedic moments), catchy and comfortable western music, mostly. Aside from a couple truly bizarre places, the ranches and saloons start to run together a little bit, but usually they’re defined by the characterization, if not by the visuals themselves.  There’s only so many ways to decorate a fort, but put a group of historical-reenactors turned military gamers behind the barracks, and you’ll find it hard to forget.

Some of the puzzles tend to require a dexterious memory or pen and paper, which drags you out of the proceedings a bit. I left math and logic behind at school, so coming up against Algebra put me a bit more east towards loathing. They are few enough between, at least, and, if you’re fortunate to pick up the right book and learn the right skill, you may be able to skip some altogether. 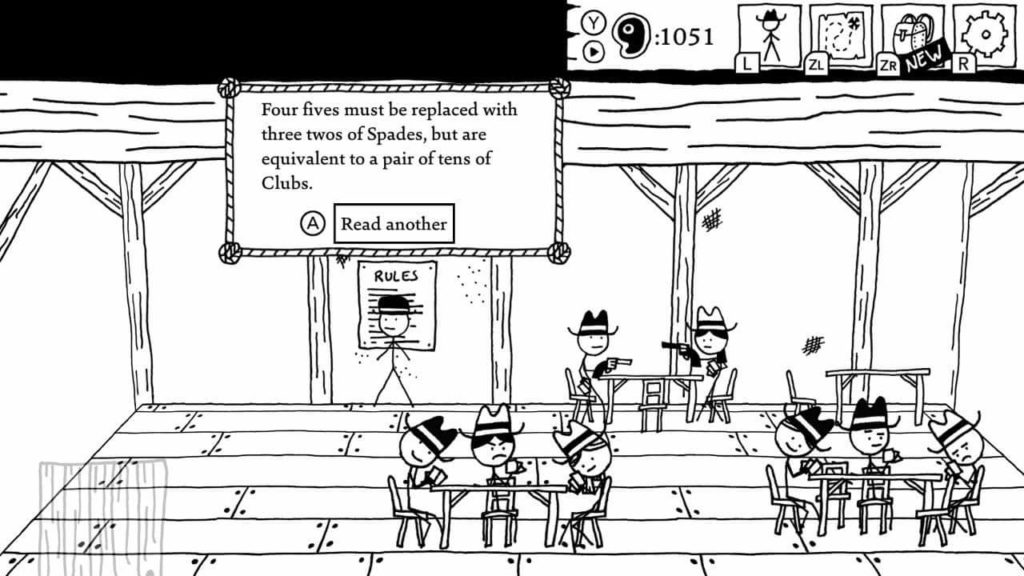 At about a dozen hours, West of Loathing doesn’t overstay its welcome. A few more battles requiring a bit more stats and strategy would have been welcome, especially in the latter half, and would make restarting with a different class and different pardner more tempting. West of Loathing satisfies and entertains with its comedy and simplicity.

A dark cowboy comedy that uses RPG mechanics and text relish in the ridiculous is not something easy to pull off. West of Loathing is a witty game wearing good jokes and bad puns.

Brutal Gamer's Nintendo Editor began his gaming life a little late- at five years old. But he's made up for it in the two decades since, gaming and writing about gaming with the same passion, fervor, and unrelenting love as his five-year old self.
Previous Solo: A Star Wars Story (Movie) Review
Next Life Is Strange Coming To Mobile