Officially called “Joker: The Clown Prince of Crime Edition”, this is a Mr J that some fans had been calling “Punk Joker”. The figure kind of vanished for a while there, but far from being cancelled, he’s now available for pre-order form Mezco Toyz.

I saw this Joker last quite some time ago… I think anyway. It’s a little hard to tell with the One:12 Collective, since the figures are offered so far in advance. Or at least, they were. They’ve kind of changed that up. But let’s get back to business, since we’re looking at a pretty awesome Joker figure here.

This is a younger, and much more punk version of the classic DC Comics baddie, and includes accessories to match. With fingerless gloves and a very different costume (for Joker), you’ll find two huge knives, an MP5, and a teddy bear with dynamite attached to it. That’s different than what the standard Joker, or the deluxe version, comes with. 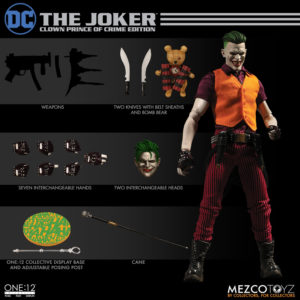 You an expect to see Joker hitting around Cover to January of this year and next, and he’ll run you $80.00 USD. Pre-order him here.

THE ONE:12 COLLECTIVE JOKER FIGURE FEATURES:

Jason's been knee deep in videogames since he was but a lad. Cutting his teeth on the pixely glory that was the Atari 2600, he's been hack'n'slashing and shoot'em'uping ever since. Mainly an FPS and action guy, Jason enjoys the occasional well crafted title from every genre.
@jason_tas
Previous Bethesda makes Fallout 76 official with teaser trailer
Next Back behind the wheel, Team Sonic Racing coming this winter