Editor’s Note: This is a companion piece to the interview with Susan Roman, who voiced Sailor Jupiter in the original English dub. You can find the published article HERE

Amanda C. Miller grew up watching Sailor Moon and remembers how it positively shaped her childhood. In this interview, she discusses how the show impacted her, how it feels to voice Sailor Jupiter in the VIZ Media dub and more!

Amanda C. Miller: I was always very imaginative and creative kid. My parents would say– anxious kid but I had a very good imagination. I would put on these little performances for my parents but was really shy and didn’t want to be looked at. My parents were always like: “How are you going to be an actor if you can’t have people look at you?”

I find it kind of funny that I eventually figured that out in voice-over, but I finally got over my fear of being looked at and I did some theatre in middle school and high school. Then I got an acting scholarship in college and got my theatre degree.

I moved to LA and I always thought I’d be doing Broadway but I started getting into voice-over and I was like: “This is really fun!”

I’ve heard similar stories to yours where the actor didn’t plan on getting into voice-over but then suddenly, there is an opportunity and they start doing it. Realizing how fun it is!

Amanda C. Miller: Yeah! I think it’s a good allegory for life. You know, we make plans and then that’s never how it actually ends up turning out. Life surprises us and you’re like: “Oh. Maybe this is the way I should go!”

How did Sailor Moon shape your childhood?

Amanda C. Miller: Well it’s so weird because I grew up watching it and Jupiter was my favorite character. As a kid, you never think they are going to revamp or redub the show and think you are going to be in it. I was the girl that moved around a lot because my dad was in the Air Force, so I was used to being the new girl at school. People weren’t wary but I was also tall for my age.

I really related to Jupiter because she showed me that you can be feminine and masculine at the same time, and you’re just as much of a girl even if you like karate or sports. And it doesn’t make you less strong if you want to get married or be a bride. She really was the first example that I saw with that duality and wholeness.

When you got the part of Sailor Jupiter did you feel scared to step into the role you admired as a little girl?

Amanda C. Miller: It was definitely nerve-wracking because I’m a perfectionist and we are our own worst critics, but if someone else got the part it’d be easy for me to be like: “Nah. They ruined Sailor Jupiter!” The thing is because it was me I’m the only person responsible if this is ruined, so I better not screw it up. So I definitely felt a little bit of pressure. 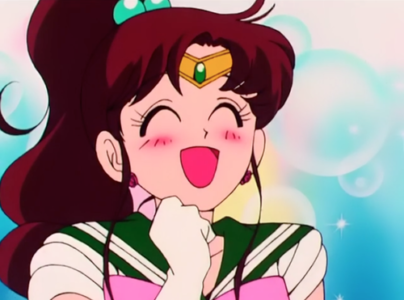 I knew people would compare it to the previous version and VIZ was like: “This is new. Imagine the other one doesn’t exist. Do your own thing. This is not a redo of the original English dub. It’s a more direct translation of the Japanese version.”

There’s room for both dubs!

Amanda C. Miller: I feel that way too! There are times where I still watch the old dub because of the nostalgia. I love the frigging music in the old dub! I still have my Luna Rock CD. To me, I didn’t see it as: “You are ruining my childhood.” I see the reboots and redubs as another addition to the universe.

In a Digital Age where everyone can state their opinion without any filters, have you come across any mean comments about you and your performance? If so how do you stay strong?

Amanda C. Miller: I think the more in the public eye you get the more you are going to have somebody who just NEEDS to say something. So luckily I haven’t had too many trolls but I think every voice actor has had some. The other day on my YouTube channel I saw somebody left a comment on something and said: “Susan Roman is better than you!” I don’t think they know we’re friends. I think they see it as a competition when actually Susan and I like each other!

Something had happened where I felt like they had been disrespected so I reached out and said: “Hey I’m so sorry that you were treated that way.” So we started communicating that way. I think we met at SacAnime in-person and they were so sweet. They let me hang out with them all weekend and even went out for a bite to eat, so that was really nice!

What did you do to embrace your role as Sailor Jupiter and make it your own?

Amanda C. Miller: It’s kind of a role I’ve been preparing for my whole life because I was running around in my backyard playing Sailor Jupiter as a kid, and in my group of friends we were all different Sailor Guardians, and I was Sailor Jupiter even at school.

The thing that made me feel comfortable with the role and say: “Okay. I deserve to be here. I am good and I am right for this part” was when I read an article about the casting process. I had recorded my audition in my closet as that’s where my studio is, I e-mailed it to the casting director and didn’t hear back for a while.

I didn’t know that basically once the casting director narrowed it down to the top 10 or 20 for each role, they sent them to Japan, took the name off them, and just numbered the auditions; so that nobody was swayed by ”Oh I really liked that actor, or oh this actor has a lot of followers!” It was just based on the audition and the voice.

They had Naoko Takeuchi listen to them and she made the final selections. So when I read that the creator of the show, that meant so much to me growing up listened to MY voice and went: “That’s my Sailor Jupiter” I said to myself: Okay. I’m going to stop doubting myself, and I’m going to trust that she would know best on who would bring this character to life.

I didn’t really do much as far as like changing my voice‒ though people have said I have a more tomboyish voice in general, but I wanted to capture her kindness.

Hey! I'm Nadia! I am a big fan of RPGs and you can almost always catch me playing one in my spare time. Writing is my passion, and my intention is that you all learn something through my work!
Previous Agony, now with even more agony! Madmind Studio adds randomized mode
Next Black Hammer gets collected in upcoming Library Edition