Marvel’s Amazing Spider-Man will be the first book from the publisher to hit  800 issues. As you might imagine, there’s a fair bit of fanfare surrounding that event. And a part of that will be this variant cover, by none other than John Romita Sr. 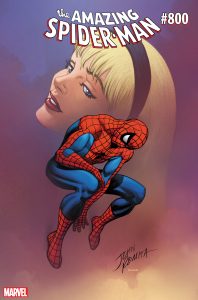 Spidey have been around for a while. His debut of course, was in Amazing Fantasy #15, which was an adventure anthology series published by Marvel way back when. But the second the character hit the book, he was a hit and it wasn’t long after that that he starred in his own comic called (wait for it) Amazing Spider-Man.

Between then and now, there’ve been a whole mess of years, decades actually. And there were more than a couple of launches in there as well (cough), but thanks to the magic of “Legacy” numbering, we find ourselves here at issue 800.

I honestly don’t know a whole lot about the story arc that’s playing out in the book, since I haven’t been reading it. What I gather though, is that Norman Osborn has evolved into a new form, and become the Red Goblin. Apparently, that means he’s a much bigger threat now. Marvel is going so far as to call it “the biggest Peter Parker and Norman Osborn story of all time”.

This variant cover to the book features a very dour-looking Spidey, as he no doubt is remembering the long-departed Gwen Stacy. The cover, from John Romita Sr. and Richard Isanove, harkens back to what I’d personally call the biggest Peter Parker and Norman Osborn story of all time, but that’s me.

Jason's been knee deep in videogames since he was but a lad. Cutting his teeth on the pixely glory that was the Atari 2600, he's been hack'n'slashing and shoot'em'uping ever since. Mainly an FPS and action guy, Jason enjoys the occasional well crafted title from every genre.
@jason_tas
Previous Handle with Care (Movie) Review
Next Myst Gets a Special Kickstarter Campaign for 25th Anniversary