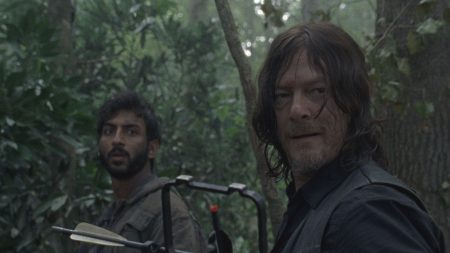 “The Walking Dead” continues to have a gnarly eighth season as we get a glimpse of what a few of the characters we have seen less of recently have been up to.

Tis episode goes all over the place: From seeing red for revenge to brief brushes with faith and most places in between, this episode packs it all. Split between three main groups, the story is stitched together competently. Lets dig in!

The Priest and the Doctor:

The only group with no interaction with the others on this week’s show is Father Gabriel (Seth Gilliam) and Doctor Harlan Carson (R. Keith Harris). The two were freed from the Sanctuary by Eugene (Josh McDermitt) after Gabriel was sick. The goal was to get doctor Carson to the Hilltop so that he could look after the pregnant Maggie (Lauren Cohen).

The episode picks up with the two in a car, and Gabriel attempting to read a map. His sickness has eaten away at his eyesight and he is having  trouble. A Walker appears and the two deal with it off screen. The car refuses to start, so the two proceed on foot. The two find a house with the remains of a radio operator who was looking for other survivors. They also find antibiotics, and it appears that Gabriel’s life, if not his eyesight, will be saved.

They break some kind of pottery and find the home owner’s car keys and a map. On the way to the car in the garage, Carson getc saught in a bear trap, and Gabriel uses some kind of incredible jedi-like senses to shoot the walker off of him. Before the two can escape in the home owner’s jeep, a small group of saviors comes upon them. Before leaving with them, the Saviors shoot Carson. Gabriel’s faith appears to be shaken to the core.

The Group on the Road:

Darryl (Norman Reedus), Rosita (Christian Serratos) and the rest of the refugees from Alexandria are on their way to the Hilltop. There isn’t too much that happens with these guys, but the things that do hapopen are pretty exciting.

Tara throws a fit that Dwight (Austin Amelio) is “still breathing.” For those who don’t remember, Dwight’s group of people were the ones who put a bolt into Denise’s (Merritt Wever) head. Denise was Tara’s love interest, and she is obviously having a tough time forgiving.

Darryl takes the leaders to scout out a swampy  route while leaving the majority of Alexandrians with Tara and Dwight. The rest of the group is resting while Tara decides to take Dwight to clear an overland path of walkers. After Dwights puts down the last walker, Tara tries to shoot him. She chases him and they are almost set upon by some Saviors. Dwights takes his opportunity and reveals himself to them, leading the group away from the Alexandrians.

This is noteworthy, because Tara was arguing that Dwight was never loyal. He proved his loyalty, even to Tara.

When Darryl returns from the scouting trip, he lashes out at Tara for letting his happen. He believes that Dwight will sell the Alexandrians out, but Tara and Rosita (who saw the exchange), assure him that he will not.

At the Hilltop, Maggie is dealing with strained rations and prisoners basically begging to be free. The Hilltop is originally excited to see the Alexandrians before they realize the true horror their arival symbalizes. The group breaks down at the ealization that Carl (Chandler Riggs) has died. 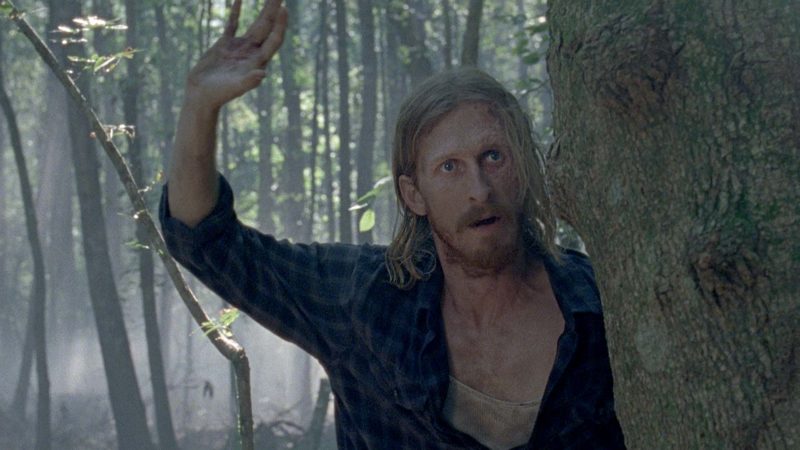 Our first glimpse in the Sanctuary is Negan (Jeffrey Dean Morgan) using very sinister language with Eugene, implying that if Eugene facillitated the release of Gabriel and Carson, there would be hell to pay.

Negan puts Eugene in charge of his own output, producing ammo. Eugene lets the position go to his head as he bosses around one of the women working for him. At the end of the episode, Negan shows up with Gabriel and tells Eugene how they escaped. He does this with a fabricated story that came from Gabriel. Negan gives Gabriel to Eugene as a worker.

Before Negan leaves, he tells Eugene to ramp up production. Eugene tells Negan that this is not possible, but asserts that there is another way to increase effectiveness.

The last scene of the episode shows Negan relaying this method to a few men. Instead of needing to actually kill enemies, they can simply grime up their weapons on  some walkers and land glancing blows to infect the enemies.

This season continues to improve week over week.

We really get to see some cool comic scenes come to life with the weapon-mucking up. Although some interactions were grating, the escalating action is continuing to get me pumped for the rest of the season. I just know that the end of the season is going to be some absolutely insane television, and I cannot wait.

Erich was introduced to gaming by his grandfather before he could walk. Since then, he has grown up loving Nintendo and most games in general. He couples his love of videogames with journalism to cover news, provide reviews and tell it how it is in the gaming world.
Previous Q&A: An Interview with Gorogoa Music Composer Joel Corelitz
Next Okami HD comes to Switch with motion control, touchscreen painting