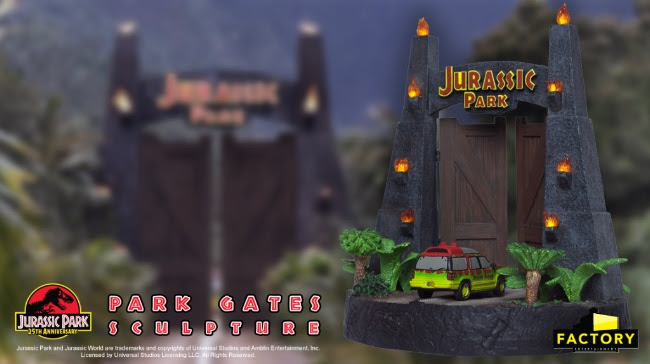 Fresh from Factory Entertainment comes this Jurassic Park diorama. The set re-creates the front games of the park, from the original film (*dinosaurs not included).

When dinosaurs ruled the Earth

I had the pleasure of seeing this bad boy up close at Toy Fair last month. So I can confirm it’s freaking awesome. If you’re a JP fan, then this is the centerpiece of your collection.

Hitting just in time for the 25th anniversary of the film, the Jurassic Park Gates sculpture stands in at 11″ tall. It’s a heavy piece too, crafted from polystone and mixed media. The doors open and close, the Park vehicle is included, and yes – the torches light up. Actually, they even flicker.

The Gates are pretty limited, according to Factory, so if you want them, you might want to act fast. And to that end, the company has a special discount that they’re offering with a coupon code.

Enter YOUGOTTAGO at checkout from now till May 31st, and you’ll get yourself 10% off the total. Not too shabby. As for the final price and availability, the Gates aren’t due to hit retail for a while. Look for this to ship out this coming October/November, with a price tag of $249.99 USD.

Jason's been knee deep in videogames since he was but a lad. Cutting his teeth on the pixely glory that was the Atari 2600, he's been hack'n'slashing and shoot'em'uping ever since. Mainly an FPS and action guy, Jason enjoys the occasional well crafted title from every genre.
@jason_tas
Previous Crash Bandicoot: The N.Sane trilogy coming to Xbox One, Switch, and PC
Next March 8 Nintendo Direct: A Doozy