Super 7 is extending the Masters of the Universe license into a trio of lineups, building on the MOTU Classics and Filiation series’ they already have going. Have a peek at what’s shipping now, and what’s on the way.

The power of Greyskull

So, I’m a pretty big He-Man fan. I have been since I was a kid. And even though I took a few years off (basically the 90s and early 2000’s), I’m probably an even bigger fan now than I was back in the good old days. A huge part of that is Mattel reviving the brand for their now-defunct MattyCollector online store.

When that folded up, so did Masters of the Universe Classics, their brilliant re-envisioning of the property. Sort of anyway. Though Matty was gone, and all the biggest and most popular characters had been moulded into plastic, that wasn’t quite the end of the line.

Super 7 was tasked with carrying on in the toy-giant’s stead. They continued the MOTU Classics line with way more niche characters, and an “ultimate” series that offered extra heads and such. These figures fit right into collections of the Matty figures, and look just as great.

Wave one of these figures is shipping right now, with a second wave still in the pre-order phase. That works a little differently under Super 7 as compared to Mattel by the way. This is no blind pre-order, as all four figures in the wave are set in stone, and you can order just one, or the whole series. It’s totally up to you.

Wave 2 features Granita, Dylamug, Karg, and Wraptrap. You can order it here.

From there, Super 7 announced the Filmation series with Club Greyskull.

That line is still raging, and includes remakes of key heroes and villains. The hook is that they’re all done in a very cartoon-faithful style. It’s honestly not my cup of tea, but it’s already making waves, and seems to have caught on just as much as the Classics series.

As with the MOTU Classics, wave one of these bad boys are shipping now, and wave two is in pre-order. Check that out here.

There’s also the ReAction figures, and the MUSCLE collectibles that Super 7 also offers up, so we don’t want to forget those. But this new line, well I kind of don’t think I’m going to be able to avoid buying in.

Super 7 is forging new MOTU figures that look like they could fit into the classic Mattel line. No, no- not the “Classics” line, we went over that already. I mean the classic line, the one from the 80s. Yep.

That means these are in the 5″ scale, and have very limited articulation – but that’s how they’re supposed to be. These new figures are built on 100% pure nostalgia. And I’m loving it. They also fit right in with the Funko Savage World collection (Mortal Kombat, Conan, etc…). That presents some very interesting display opportunities.

I cannot wait for these. Watch for pre-order news on them sometime soonish. 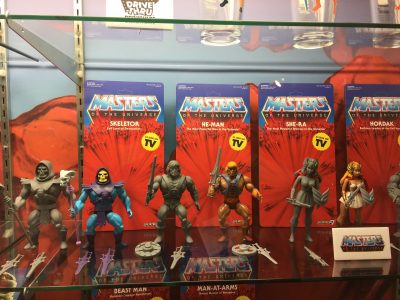 Jason's been knee deep in videogames since he was but a lad. Cutting his teeth on the pixely glory that was the Atari 2600, he's been hack'n'slashing and shoot'em'uping ever since. Mainly an FPS and action guy, Jason enjoys the occasional well crafted title from every genre.
@jason_tas
Previous Diamond preps for the Infinity War with loads of new Marvel merch
Next Amid Evil brings classic fantasy FPS gameplay back to the PC this month