With a Bumblebee movie already on the way in 2018, it seems like it’d be only natural that an original graphic novel was also en route. That’s just what publisher IDW has on tap.

Win if you dare

The above line is synonymous with Transformer: The Movie. Yes, I understand that you might not immediately think of it when referencing the animated 80s classic, but it is. While “The Touch” is the easy favorite from the flick’s soundtrack, “Dare” (which features those lyrics) is right there with it.

Why does any of this matter? Because just like this year’s Bumblebee movie is set int eh 1980s, so’s this OGN from IDW. Of course, that’s where the similarities end. 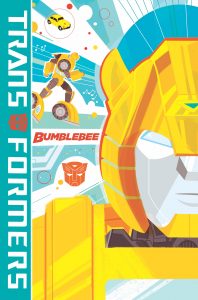 When his best friend is hurt, Bumblebee takes it upon himself to finish the mission—and prove his worth to his fellow Autobots along the way. Things get tense as Bumblebee and a new human friend infiltrate a series of incredible races, hunting down dangerous foes and a devastating secret. It’s an exciting new, action-packed ’80s adventure! X-Men ’92 co-writers Chad Bowers and Chris Sims along with artist Marcelo Ferreira (Back to the Future, Transformers: Windblade) have crafted a nostalgia-tinged, yet equally fresh standalone story.

Presumably, this OGN will be in-continuity for IDW’s Transformers line of comics. Just how much the movie that the subtitle bowers from plays in is a mystery however. There might not be any link though, as this could be a simple tip of the hat to a fan-favorite.

Watch for Bumblebee: Win if You Dare to hit stores this coming September the 11th. It’ll run you $9.99 USD.

Here’s a bit about the book from the creative types:

“The exciting thing about this book is that it really hits all the highs of TRANSFORMERS for fans new and old,” said IDW Associate Editor, David Mariotte. “It has action, adventure, racing and robots, but it also has a lot of heart and humor that comes through in this simultaneously retro and very modern package.”

“This story is just a ton of fun,” said Michael Kelly, head of publishing at Hasbro. “Bumblebee is the ultimate underdog, and everyone loves an underdog. IDW has done a fantastic job bringing this iconic character to life for a new generation of fans.”

Jason's been knee deep in videogames since he was but a lad. Cutting his teeth on the pixely glory that was the Atari 2600, he's been hack'n'slashing and shoot'em'uping ever since. Mainly an FPS and action guy, Jason enjoys the occasional well crafted title from every genre.
@jason_tas
Previous Toy Fair 2018: Playmates Toys Rise of the TMNT showcase
Next Toy Fair 2018: Playmobil’s Ghostbusters sets get animated for wave 2