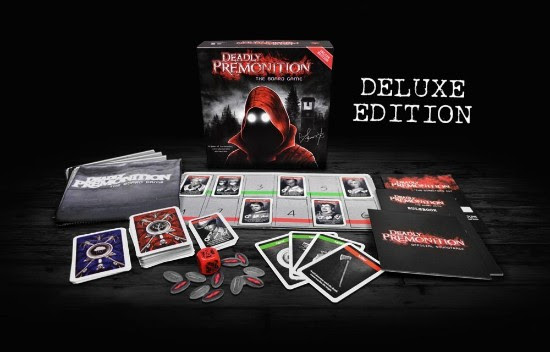 Niche horror/thriller video game Deadly Premonition is now a board game. The new title has landed on Amazon, and can be pre-ordered as of today.

Imaginary friends aside, I’m continually astounded at the legs that Deadly Premonition has. The game started as a title that didn’t get much attention, but it’s hung around like nobody’s business. It’s built up a nice stable of fans too, who love it for it’s quirky sensibilities.

And now that cult status has resulted in it making the jump from the screen to the tabletop. A board game that’s seemingly designed to play fast, the new title looks to have pretty much everything that a DP fan could hope for.

“This new Deluxe edition of the board game is in honor of the campaign that made this project possible,” said Samuel Elphick, co-creator of Deadly Premonition: The Board Game. “It features some of our favorite items which make the board game special and capture that Deadly Premonition spirit. Whack on the soundtrack, lay the cloth upon the table and hold your breath when the Raincoat Killer claims suspects with the bespoke murder die. This is how we want the game to be played!”

I don’t know what half of that means, but if you’re a fan then you probably do. And I’m sure you’re mocking me right now. Thanks for that.

The game will be available as of the 31st of this month, so you can be playing in short order. And as I mentioned, you can lock up a copy for yourself right now. Hit this link to do just that on Amazon.

Here’s the complete skinny on the game:

Welcome to Greenvale. In this small mysterious town a young woman has been murdered. Anna Graham’s death marks a tragic loss for the community.

The town is home to many strange characters. With no significant leads on the killer, each must be considered a suspect. It’s time to kick-start the investigation and get to work, isn’t that right Zach?

Each agent has been assigned six suspects to investigate. You must protect the innocent, uncover incriminating evidence, apprehend an accomplice and identify the hidden killer among you before it is too late.

Jason's been knee deep in videogames since he was but a lad. Cutting his teeth on the pixely glory that was the Atari 2600, he's been hack'n'slashing and shoot'em'uping ever since. Mainly an FPS and action guy, Jason enjoys the occasional well crafted title from every genre.
@jason_tas
Previous Trio of new DC Comics statues coming up this year from Icon Heroes
Next 182 US Toys R Us Stores are Closing