Guardians of the Galaxy Ep 2 Under Pressure (PC) Review

Episode 1 left us with a deceased StarLord, and the Guardians with an uncertain future. Let’s see what happens in Guardians of the Galaxy – Ep 2 – Under Pressure.

You can find our coverage of Ep 1 here. 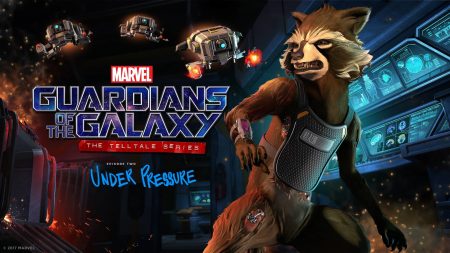 The Eternity Forge was able to bring StarLord back from the dead, though they’re not entirely certain how. Of course, Drax and the team don’t take this lightly. Everyone assumes that StarLord has been taken over by some strange being, rather than being himself. Upon proving his personality, Drax has to avert his gaze from Peter’s dancing, and the remainder of the team grudgingly accept that he is back. As Rocket points out, what’s the catch?

While the Guardians have been bickering over the finer points of how and why Peter revived, Hala, the Kree that killed him, has caught up to the gang. Peter wastes no time announcing that he does not want to give her another shot at it.

Quill turns on some of the 80’s music he’s known for, and takes the helm of the Milano. Rocket and Gamora question his ability to maneuver, so quickly after being resurrected. He responds with a sharp jolt to controls, saving the ship from a torpedo blast while simultaneously ejecting Rocket from his seat.

“Come Find Me In The Temple.”

The milano’s boosters begin to fail, and the Guardians need a place to lay low for repairs. Peter knows of one man who can offer both answers: Yondu Udonta. 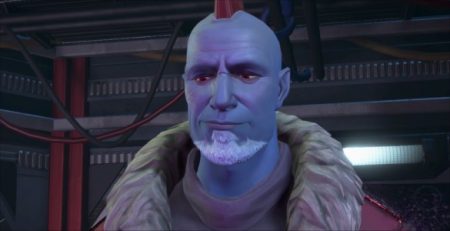 Few in the universe know Peter Quill than the man who raised him. It then makes sense that Quill would seek out his big blue patriarch-type figure when he needs a hand. The only setback to this logic would be that in my playthrough, I gave the body of Thanos to the Nova Corps, so now Yondu thinks I’m a goody-two-shoes.
It takes some convincing and a bit of trash talking to get Yondu to open the door. What he doesn’t realize is that the entire Guardians’ team is with him. Drax eats his food and Rocket points a gun at him. Talk about being kind to your host!
Yondu and Quill both see some of Peter’s visions of his mother. This time though, things are different. His mother is speaking and behaving differently than she would have. The Eternity Forge is giving them a message. “Come Find Me In The Temple.”
Ancient Kree glyphs appear on the Eternity Forge, sending the team toward the only person they know who may be able to read these: Gamora’s sister Nebula. Before we can find her, we are interrupted with a choice: whether to proceed directly to Nebula or help Rocket try and resurrect his lost love with the Eternity Forge. I thought the resurrection could be an enjoyable trip, though Gamora didn’t think too highly of it. Sadly, things did not work out the way Rocket had envisioned.

Due to my side trip, Nebula has had some free time to punish the Nova Corps for possessing her father’s body. Gamora makes sure you know that you could have had an impact on this, as do the officers of the Nova Corps. It should come as no surprise that Quill and the Guardians are able to evade the Nova Corps and go after Nebula. This however, is not such an easy task. Involving flying into space and disfigurement, they get the job done as only the Guardians can.

With Nebula aboard the Milano, it doesn’t take long for things to take a turn for the worse: First we get the sibling rivalry of Nebula vs Gamora, then Hala has found the team, and wants the forge back. Rocket is in a dark place after getting his hopes up that Lylla could be resurrected. Drax is feeling unfullfilled after the victory over Thanos. This is quite a position to be in.

I chose to leave Drax guarding Nebula on the ship. Sibling feelings aside, I wanted the destroyer to feel like he had something worthwhile, while Gamora and Peter went back to the temple. Uncertain of who had the message on the Eternity Forge, I needed all bases covered. We found out that Hala had already been to the temple. We find a mural depicting how the forge operates, as well as some glyphs that we were able to translate, thanks to Nebula’s reluctant assistance. The person we seek is actually not in this temple. The star map they find lead them to a place named Emnios. Though now that we have progressed through the temple, it seems Hala has an ambush in mind. Hala’s away team is no match for our Guardians, and off they go, in search of Emnios. But what will they find? We will have to wait and find out.

Hala has killed Quill, and now she wants to do it again. And then there is the matter of her thousands of Kree aboard her ship. If that 's not enough, they're headed to a planet they've never heard of, not sure what they're looking for. Sounds like Episode 3 will be enlightening for all of us.

A fan of media on multiple platforms, I am always watching or playing something! Who knows what I will be on to next?
@mackeyp42
Previous See Coco in action in this new Crash Bandicoot trailer
Next Brutally Honest Podcast 31: In the Midst of E3