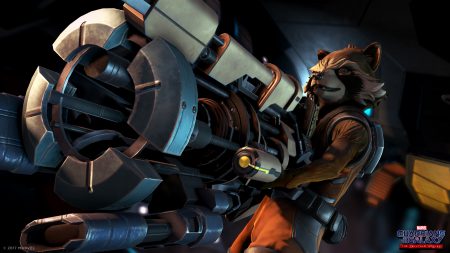 Star-lord and company are called into assist in a battle against the Nova Corps and the infamous Mad Titan, Thanos. Though before they can be of much assistance, the Milano is hit by a missile and careens into a Kree planet. Groot catches fire, and some jokes ensue, but the team survives (mostly) unscathed.

Thanos seems to have made quick work of the Nova Corps, and is in search of an extremely powerful superweapon. Luckily, the Nova Corps were able to reach Star-Lord and the Guardians before Thanos took the corps down for getting in his way.

Star-Lord is able to sort out how things went down well enough to find their way deeper into the temple, as Thanos kills the last of his Nova opponents. This is when our band of Misfits come face to face with the Mad Titan.

As you would expect from such a meeting, Thanos is not a pushover. He is able to grab Drax mid-attack, and throw him across the room. Thanos seems to have the upper hand on this battle for the majority of the encounter, bobbling Guardians like chess pieces. Until that plucky little rascal Rocket Raccoon is able to get his own unnamed and oversized superweapon to work. Star-Lord is able to shoot Thanos in the chest, and quickly falls to the ground. The Mad Titan has been neutralized, and the Guardians possess what he was after – the Eternity Forge. So what now?

The gang goes back to Knowhere to bask in their victory, with drinks and cheers from the crowd. Along the way, we learn that Rocket wants to leave the team, Drax needs to feel validated, while Gamora worries of what is to come next. 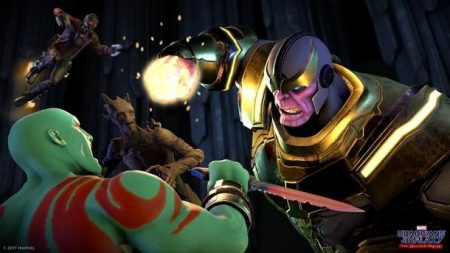 In order for the gang to make a few bucks and continue on their adventures, you have to decide who to sell the body to: The Nova Corps to collect a bounty, or to the collector, and take your chances with dealing with a leader of the underworld.

I sold the body off to the Nova Corps. After the body changes hands, the party is crashed by a band of Kree. They steal the Eternity Forge and take off, leaving our heroes to run after them. Star-Lord and Gamora go off to fight their way into the Revenant, a Kree Warship. However what they find is not what they expect.

The ship is almost vacant. Bodies in stasis pods, most of which have expired. So finding their way to the bridge is a rather simple task. Once there, the story takes a different tone. Addressing Hala the Accuser is not a simple task. She has plans for the Eternity Forge – to revive her race, the Kree. Thanos made the race all but extinct.

Hala tells us that it will take many sacrifices to bring them back. And impales Star-Lord with her energy spear. Gamora is unable to get revenge on Hala, being knocked back herself. Thankfully Rocket was monitoring the situation back aboard the Milano, and is able to fire a rocket into the deck where Hala and our heroes are doing battle. This blast knocks Hala back, and Gamora is able to retrieve the Eternity Forge and help Star-Lord make it to safety.

We see a flashback of Star-Lord as a child at his mother’s funeral, where Yondu approaches him for the first time. Yondu is supposed to watch after Star-Lord if anything happens to his mother. His mother appears in the vision, then as it appears his mother is showing him what to do next, the Eternity Forge heals his wound.

We will have to wait for Episode 2 to see where Rocket and the gang go next!

By-in-large, TellTale does a great job of making their characters look good, albeit sometimes cartoonish. I wish they would have improved Thanos’ look somewhat, though since he isn’t long for the series, I suppose it works out alright.
The way the story is starting, there should be plenty of opportunity for the characters’ color to really shine. Here we go!

Timed to come out with the major motion picture, TellTale's Guardians Of The Galaxy is a blast. Getting the chance to bounce chatter off Rocket, and making sure not to upset Drax. You don't want to miss your chance to join the Guardians.

A fan of media on multiple platforms, I am always watching or playing something! Who knows what I will be on to next?
@mackeyp42
Previous Nioh DLC Dragon of the North drops May 2
Next Making a Difference with TableTop Gaming: An Interview with Geeks4Good’s Leah Caddigan and Miles Duffield