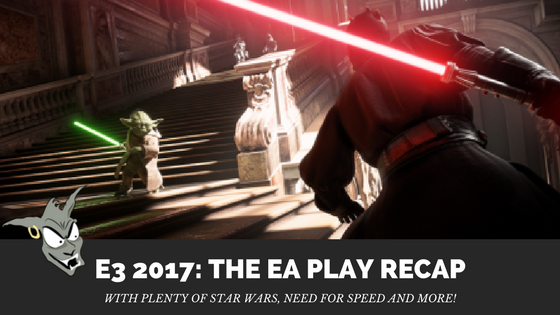 E3 2017: The EA Play Recap With Plenty of Star Wars, Need for Speed and More

We already knew what EA’s press conference was going to be about. And I mean a lot of Star Wars: Battlefront II. They didn’t disappoint.

A tease of Anthem

But the whole show wasn’t just Star Wars. About half was SW: BF2, but they also gave us some an amazing new IPs. A brand new property from Bioware that we know nothing about appeared as well. Oh, and lots and lots of sports. My apologies for anyone here to read about sports games because that is not what you’re going to get, so sorry.

First on the list of what we’ll be chatting about today is Anthem. That is the new IP from Bioware, created in partnership with Microsoft. It looks to be a Destiny-like game in a shared-world shooter experience. Bioware stated in a tweet that it will be four player co-op. It looks beautiful, running on their Frostbite Engine. Other than the engine and a brief look at it in action, that is about it and all we know so far. They will have a bigger reveal, however, on tomorrow’s Xbox Press Conference. So check back here on BG for that.

Payback takes it to the streets and A Way Out impresses

Need For Speed: Payback is EA’s next game in the popular racing series, and it definitely reminds me of Fast and the Furious. Lot’s of intense, insane action. Payback is fast, has a lot more customization than previous games, and is set outside of Los Angeles. I hope they don’t focus too much on online personally, but from the looks of it, EA is giving us the story we want… even if it might be a corny one. So far EA’s is listening and it’s good to see!

Now let’s talk A Way Out, developed by Hazelight the studio (which brought you Brothers: A Tale of Two Sons). A Way Out showcases cinematic, split-screen action/adventure gameplay, where you and a friend take on the role of two brothers. So far we know you have to break out of prison, but judging by the trailer it’s more than that. There’s a deeper story here and I’m pretty excited to play it. Big plus? It has both online and local co-op.

You choose how you play and not everyone will have the same experience. At least, that’s what I’m concluding from what I’ve seen and heard. The game will always be in split-screen however, and you must play it with a friend. I don’t know how that’s going to fare for a lot of people. I imagine most gamers will have to team with random partners most of the time. Still, it’s good to see EA giving people something new, and focusing on story.

Return to the Battlefront

Now, last but certainly not least -in no way, shape, or form- is Star Wars: Battle Front II. The sequel to the multiplayer-only first installment of the rebooted series is here, and it looks amazing. The graphics alone are stunningly realistic, and really show off some power.

With all three Star Wars eras put into one game too, this will be the biggest Star Wars: Battlefront title yet. EA says that it will have over three times the amount of content than was in the last Battlefront. Even better? It will feature completely free seasonal DLC for years to come. In fact, this winter you’ll be getting Finn and Captain Phasma for free as playable characters.

With more planets, ships, guns, and characters, Battlefront II feels radically different from the first game. I’d say it’d be fair to basically treat this as another reboot. Everything has been overhauled and organized properly. Plus, the new campaign where you fight for the dark side as an Imperial trooper seems awesome. Finally, gamers will get to feel what it is like to be with the Empire, and see that the Rebels aren’t all that they’re cracked up to be.

EA went all in with Battlefront II and it shows. The battleground isn’t sparse, but it’s not too much either. There are troopers and droids all over the place, with gunfire and ships crashing everywhere. It looks to be the right amount stuff to keep you engaged, but not overwhelmed.

This is just a taste of what’s to come from E3, and EA kicked it off pretty well. They listened to their players and provided the single player content people wanted. And they also seemed to have dropped the season passes that we all kind of hated.

Let me know if the comments below your thoughts about Battlefront II, and how you feel about A Way Out. It could be one to watch. And stay tuned for more E3 content right here on Brutal Gamer!

Dylan is a writer, gamer, avid movie lover, and PlayStation extraordinaire. Currently, he attends Radford University in pursuit of a BS in Media Studies with a concentration in Journalism. When he’s not writing the next epic post (but you know he is), he plays games like Destiny, Uncharted, Wolfenstein/DOOM/Dishonored; long story short: If I played the game, I liked it; if I haven't played it, just remember that I'm in college.
@Dylanslegos
Previous The BG Game of the Month for May, 2017 is Injustice 2
Next First impressions with the Virtuix Omni (VR) in South Africa 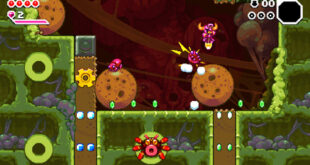 This week Nintendo players have a couple of nice options for fresh gaming, including Life …