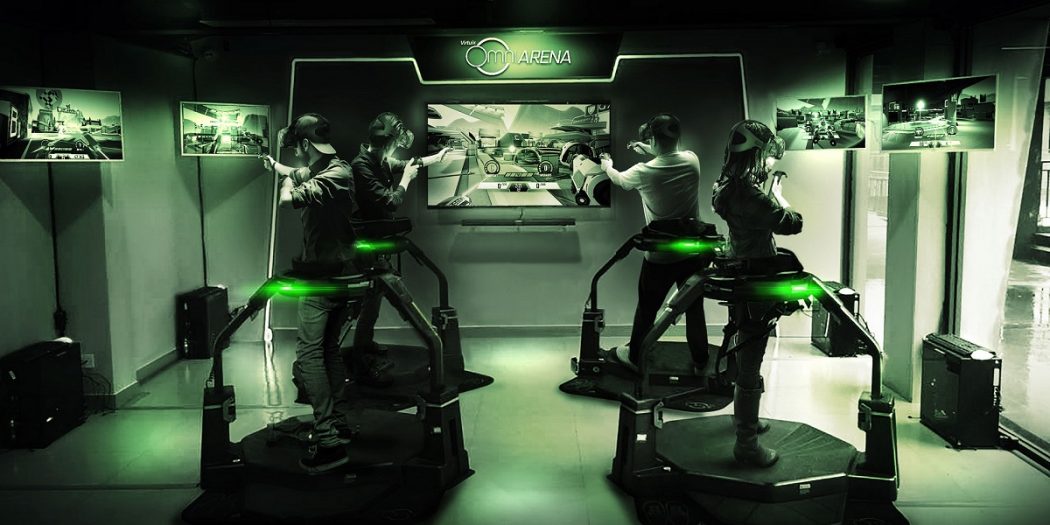 First impressions with the Virtuix Omni (VR) in South Africa

Virtual Reality is on the rise and, according to the Gartner Hype Cycle of Emerging Technologies, had entered the “Slope of Enlightenment” as of last year.

What this slope means for VR is a possible 5 to 10 year span in which VR is heavily experimented with. Huge efforts are put forth to discover all the possibilities it can offer. This means making products and development commercially available, to see if it is viable. It also means discovering risks and benefits, getting feedback on applicability, and discovering new solutions.

Is this the real life?

A drawback of any newly emerging expensive tech is its availability in poorer countries to the masses. So, imagine my surprise when I was told that Virtuix Omni(s) (PLURAL!) had been setup outside an arcade center in a nearby mall (The Grove) in my country: South Africa. The minute I got off work I drove there. And lo and behold, there it was: the Virtuix Omni. A VR motion-enhancing device that I thought I’d never see unless I went overseas. And even then I thought the chances were slim.

Firstly… I was flabbergasted. At 18:00 the setup was deserted! Void of any personnel and security besides that of the mall itself.

DO THESE PEOPLE KNOW HOW MUCH THIS SETUP WAS WORTH!?

All in all, there were 4 fully setup Omni’s with their addons (this includes the hardware to run it!), 4 HTC Vives, 4 screens and a large screen. Lets do some “guesstimation” for just the Omni’s shall we?

According to a Tom’s Hardware article from last year, the price of a pre-ordered setup (treadmill, racks, booms, shoes – with tracking pods I assume) was $699. This excludes the hardware alongside it so lets tally that too: a VR-ready PC from Omni at $1579 and a HTC Vive at 799$.

This excludes the horrendous shipping and markup costs South Africa experiences. I would gather that some economic-savvy investor got a hold of Omni and made a deal with them as they state on their website “If you’d like to use the Omni commercially in a VR arcade, gaming center, or shopping mall, we’d love to hear from you – please contact us here.” Thank you investor, but by the nine divines what the hell!? THIS IS SOUTH AFRICA! I’d totally steal this! Get some barriers and guards up there!

But anyways, on to the experience!

Is this just fantasy?

An assistant was called forth by the arcade staff to start the Omni experience for me. I had to put on the special shoes (which come in normal sizes) that made me feel like I was learning to walk all over again. The tracking pods were placed on the shoes in magnet fashion. I was impressed.

The assistant then opened the Omni like a roller coaster ride – a hinged portion of the circular frame was pulled to allow me access to the sloped-edged platform. Stepping into the Omni was like slipping in a shower at first. I had to grab the emergency railing (Omni railing) to regain my balance.  Once my feet were on the central flat plane and I was stable, the Omni was “closed”.

Then came the embarrassing part: the diaper-harness.

The assistant roughly checked my height and lowered the ring of the Omni to around chest height. Then he had to put 2 straps on my thighs (totally not awkward right?) which hooked up to a central stomach strap. This was connected to the rotating inner frame which allowed 360 rotation. An important factor was setting the outer frame just right so that you were nearly lifted off the ground. I ascertained through my experience that if it’s too low, you won’t easily rotate or run. Too high and you’re being wedgied.

Finally, the HTC Vive headset was placed on me with cables suspended from a convenient boom. A small headset was placed over this and I was given a gun frame with a Vive controller. The boom is an amazing thing. Just having the cables away from my movement alleviated a lot of discomfort.

Caught in a landslide

I was given choice of a shooting range or a zombie demo. Not much of a choice hey? The graphics of the zombie demo reminded me of arcade type shooters. It was not too bad but wasn’t all that realistic. The demo was smartly designed in that it began with you following a soldier, Craddock, to some messed up warehouse and underground storage facility scenario. This required me to actually learn to walk and move and rotate.

Good news was the running and walking worked fairly decently. To walk, you had to lean forward and simply walk. Running worked just about the same. There was no game lag, it ran smoothly and head and controller-motion tracking was good.

Bad news was it was quite clunky.

Trying to rotate while walking or running was difficult. There was some slight lag on when you stopped running in reality to when you stopped in VR. This lead to an awkward jerk in VR after you had already stopped physically walking. This was really bad as it TRIGGERED some motion sickness. Another issue is one must keep their arms above the ring. You can’t lower them next to your body.

These issues may have to do with the length of the harness, and I’d presume if the harness was shortened and the ring brought down to hip height it would solve the problem. Looking at the splash page on their site I reckon this is indeed the intended position of the harness. Perhaps a redo is in order hey? Or maybe I’m just too damned short!

The demo itself was like an arcade shooter complete with jump-scares.

At a point your friend, Craddock, is thrown around in the air by a paranormal entity. You need to do a 180 and shoot at the zombies emerging from all those conveniently locked doors you passed. Most of this is done stand still to avoid motion sickness I assume. I was so immersed or conditioned that I pulled the gun back to reload it when it actually reloaded automatically in-game. After which you run to an X-Men glass prison scenario. In a room a scary girl is locked in cell of glass and is moaning some creepy stuff and wants to get out. At which she breaks the cell and teleports behind you jump-scaring the crap out of you.

I was allowed to do the demo twice because I was told that players thus far couldn’t get past the jump-scare girl.

And I was literally sweating at the end. I had exercised playing a game!

No escape from reality (yet…)

The most important thing about this experience was that it was available for the everyday person to try of any age. Children were allowed to play as well. The knowledge gained from this must certainly be helping to hone the industry, attract investment and improve the design of these products. I was elated that such a device had come to SA and was setup fairly well. Overall, I have my opinionated recommendations for this VR treadmill based on competing devices, Vue VR and KatVR:

– A circular frame, while perhaps providing safety in the event the harness fails, limits movement and can be discomforting

– The lag from when one stops walking severely increases motion sickness. This should be accounted for either in software or hardware. I’m not sure how it is triggered so I can’t say which.

Giving this VR device a whirl was enjoyable and I’d definitely like to try it again. I’d buy it if the motion sickness issues were solved as well as changing directions when running. Then I’d install Morrowind and run everywhere with no fast travel just like I used to 🙂

Is it really Omni?

The Omni may be a diamond in the rough. Tweaking needs to be done with running while changing direction. However, it reached SA first which means it is the most commercially viable VR treadmill.

Megan here! I am pretty well versed in all things weaboo and geek. I've loved videogames since I was born and even made my own for my 3rd year of Multimedia at the University of Pretoria in sunny South Africa. I have enjoyed anime from the days when Pokemon was considered satanic and Aniplex used to exist on DSTV. In the past couple years I have really gotten into manga, particularly Berserk to see where the story headed after the original anime. If there's one thing I will always love 110% it is cats. Don't doubt my faith in my love for felines.
Previous E3 2017: The EA Play Recap With Plenty of Star Wars, Need for Speed and More
Next Tetsuya Nomura releases new Kingdom Hearts trailer