In continued fashion, another Xbox game is remastered and released on the Xbox One. This time around, gamers will be able to experience Voodoo Vince in all its glory in HD as well as a graphical upgrade. Vince is 13 years old, so the gameplay is ancient compared to modern day games. While Voodoo Vince is a cult classic, it is still not widely known experience. Is Vince’s story enough to carry players through to the end of the game? Better yet, is this simple platformer worth picking up?

Beep Games has brought back a cult classic with Voodoo Vince. The classic 3D platformer was first developed for the original Xbox. Vince is a special doll that lives in a shop full of magical items. His story takes him through the streets of New Orleans as he tries to save the shop owner, Madam Charmaine. The antagonist of the game, Kosmo the Inscrutable, has sent two of his thugs to steal the Madam’s Zombie Dust.

The two thugs, Jeb and Fingers, are less than stellar gentleman. In their attempt to steal the Zombie Dust, these two knuckleheads wind up spilling the Zombie Dust and all hell breaks loose. During the commotion, a bit of dust falls on a voodoo doll, and Vince springs to life. This is just the beginning of Vince’s journey. 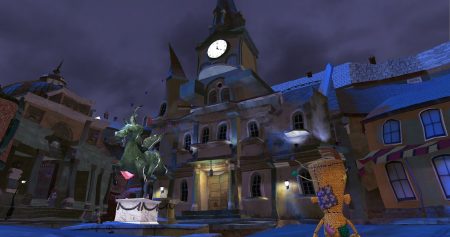 Help Me Voodoo Vince, You Are My Only Hope

During the scuffle, Madam Charmaine returns to her shop. She finds the two thugs and a mysterious swirling cloud. Jeb and Fingers decide to grab the Madam, no one wants to leave empty handed, and the two make off with her. Now it is up to Vince to say the Madam and help restore reality. Vince must venture outside the shop into the magical world of New Orleans.

The Zombie Dust has transformed more than just Vince, it has seeped out into the streets of New Orleans. The brick-laden streets twist and turn, and inanimate objects come to life. A great cast of characters also joins Vince on his journey. During Vince’s adventures, he befriends a trumpet-playing jazz musician, who happens to be a skeleton. The scene between Vince and Bones is an unforgettable scene. The scene is not especially written well or meant to be moving, but the fact that a skeleton and a voodoo doll are jamming out in the middle of a haunted square in the city of New Orleans makes for an unforgettable scene. The interactions of the characters really makes this game come to life.

Vince Is An Entertaining Voodoo Doll 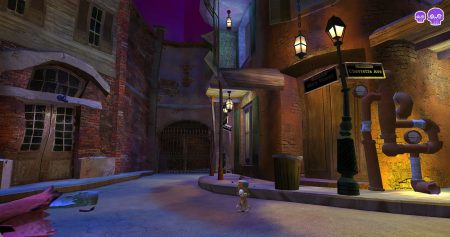 Vince’s goal is clear. He must save the Madam, and along the way he meets a strange cast of characters. Vince will face a pair of talking gas pumps, Reggie and Primo, and they happen to be quite surly. Vince will have to outwit these two talking pumps in order to progress in the game. Along the way, Vince will meet an egotistical turtle, Professor Ethel. This epic journey is more than just a fetch quest, each character plays a part for the bigger story. There are twists and turns to the story line to help keep the gameplay fresh.

This is a simple platformer from the early 2000s. Vince is limited with his abilities, he can hurt himself in order to defeat baddies. He can jump, double jump and slightly glide, all pretty standard for today’s games. There are plenty of collectibles that will enhance Vince. This is a fun story with a lot of humor. While the story is unique, it is still a little bland. The real hidden gem of this game is the characters and their interactions.

Having never experienced Voodoo Vince, I have to say it is a pleasant experience. The graphics have been given a major overhaul, and in turn, the game actually performs better. After experiencing Voodoo Vince, I cannot image all the missed Easter eggs and extras because of the antiquated graphics from the original Xbox. While it is a platformer at heart, there are plenty of collectible items for Vince to find. My first impression from this game, back some 13 years, that it was marketed as a child’s game.

While the gameplay is simplistic, it is by no means boring. Vince deals damage to himself and when fully powered, can perform a super move to destroy all the enemies on the screen. Other this neat feature, there is no ground breaking gameplay. The story and the character development really make this game memorable.

It's another remastered game for the Xbox One, but Voodoo Vince is worth picking up. This is a great game for all ages and a solid experience. Vince is just one of the zany characters included in this must-see cast.

As a fearful proponent, I agree with out robot overlords on House Bill 10010101 - The Full Extermination of the Human Race. But until then, make sure to check out all my writings on video game stuff.
@@docbrown303
Previous The Visitor: How And Why He Stayed #4 (comic) Review
Next FOX’s New Mutants Goes Horror