Marvel teams the mutants of Weapon X with Hulk this Summer

Take a whole bunch of clawed X-Men, mix em up with a resurgent Weapon X program, and add a sprinkle of Totally Awesome Hulk. That’s basically Weapons of Mutant Destruction.

If you picked up the first issue of Marvel’s new Weapon X book, then you know that the evil group is back. More than just a title, Weapon X focuses on well… Weapon X. They’re back once again, and cranking on a new batch of killers. The assignment? Wipe out mutants of course.

Yes, they’re well on their way too, with a creation that’s more than a match for Logan and Creed. They are missing one element though. One part of the genetic soup that they’ve made that’d put them over the top… Amadeus Cho – The Totally Awesome Hulk. 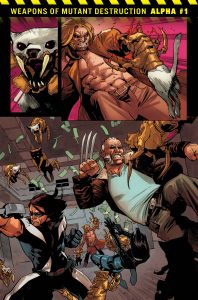 “The heroes and villains who have come together to battle the new Weapon X include some of Marvel’s most ruthless killers, trackers, and hand-to-hand combatants with Logan, Sabretooth, Domino, Warpath, and Lady Deathstrike,” said series writer Greg Pak. “But to stop Weapon X, our team needs the brains and brawn of Amadeus Cho, a.k.a. the Totally Awesome Hulk. The trick is that Amadeus’s cocky optimism might put him on a collision course with his own ruthless teammates. The sheer visceral fun comes from the massive mayhem of the world’s most lethal X-Men cutting loose alongside the Hulk with the fate of all mutantkind in the balance.”

Amide the already growing body count and the devastating trail of devastation, another mystery is growing, that of Weapon X’s mysterious new “Batch H” experiment.

“Batch H is the final step, the big, terrifying climax of everything that Weapon X has been working towards since our series began,” continues Pak. “And if they succeed, mutants will never face a more perfect predator or more implacable enemy!”

A Hulk and Wolverine working together? Strange times indeed. Watch for all of this to go down starting this June in Hulk and Weapons of Mutant Destruction: Alpha.

Jason's been knee deep in videogames since he was but a lad. Cutting his teeth on the pixely glory that was the Atari 2600, he's been hack'n'slashing and shoot'em'uping ever since. Mainly an FPS and action guy, Jason enjoys the occasional well crafted title from every genre.
@jason_tas
Previous Capcom’s classic Ghouls ‘N Ghosts now available on mobile
Next Witcher fans, Geralt is back – The Witcher is heading to Netflix