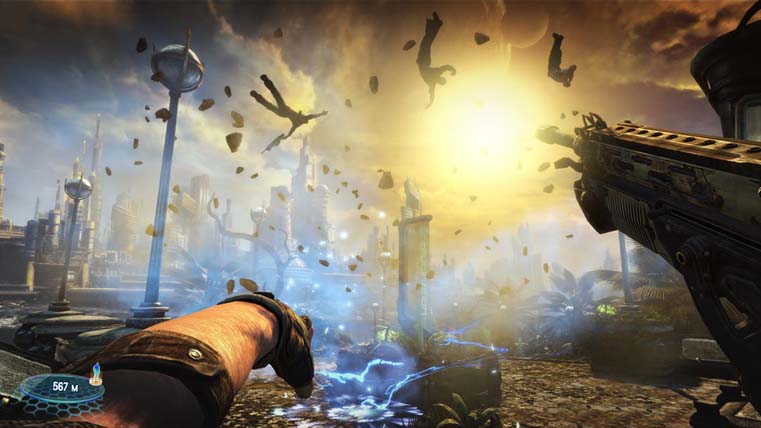 I can seeeee my house from heeeeere!
Home / News / Bulletstorm reloads and goes Full Clip in new launch trailer

Looking better than ever, Gearbox and People Can Fly’s Bulletstorm is back. The game is locked and loaded with the Full Clip Edition.

If you haven’t played Bulletstorm, well… you should. Over the top, loaded with action and interesting weapons, and genuinely funny, it’s still a terrific shooter years after its original release. And with the Full Clip Edition, now it’s even better looking.

Not too shabby, and an improvement on what was already a sharp looking title. Of course, there’s more that separates the Full Clip version of Bulletstorm from the vanilla installment. And yes, I mean Duke Nukem. The Duke is a playable character that takes the place of main character Graydon, and apparently he offers a much more comedic play through.

Is it shoehorned in? Yeah, it seems like it, but with a new script for him and all new lines recorded by Duke actor John St.John, I probably wouldn’t complain all that much. It’s also free with a pre-order, so there’s that as well.

The game hits in all it’s Full Clip glory on April 7th. Scroll down of rate full details.

Jason's been knee deep in videogames since he was but a lad. Cutting his teeth on the pixely glory that was the Atari 2600, he's been hack'n'slashing and shoot'em'uping ever since. Mainly an FPS and action guy, Jason enjoys the occasional well crafted title from every genre.
@jason_tas
Previous Blue Exorcist: Kyoto Saga Review
Next Nintendo Switch’s LEGO City Undercover brings up storage issue