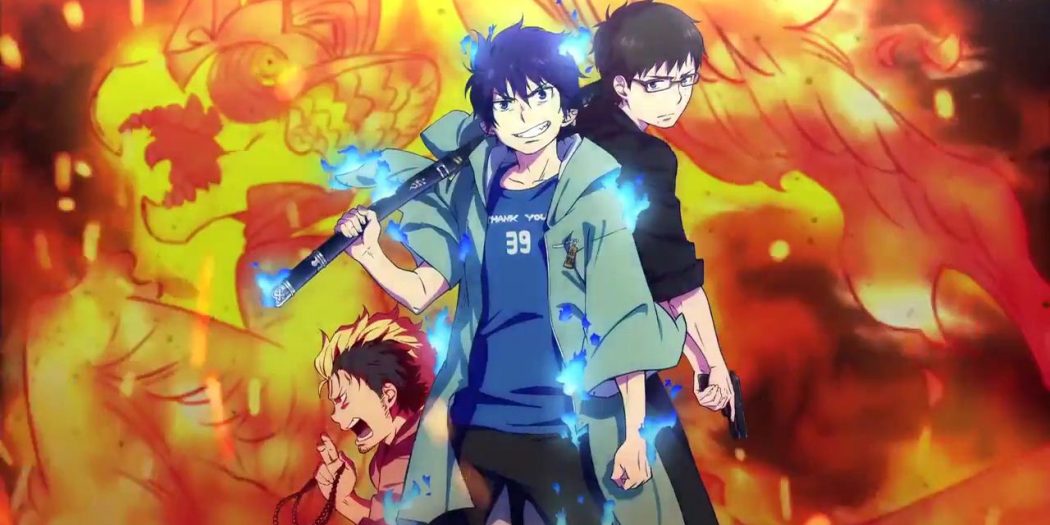 After more than five years, the Blue Exorcist anime returned with the Kyoto Saga story arc, building on the successes and strengths of the first season.

Set roughly after the events of episode 17 in the original series, the story picks up after protagonist Rin Okumura has been revealed to be Satan’s child by losing control of his blue flame powers. In response, he is put under constant surveillance by the True Cross Order with the condition that if he loses control of his flames again, he will be executed. for this reason, Rin is taken along on a mission by his brother Yukio and his mentor Shura to respond to the theft of “The Left Eye of the Impure King,” a remnant of a powerful demon sealed beneath True Cross Academy. They learn that the thief, Saburota Todo, plans to steal the “Right Eye of the Impure King” housed in the Kyoto sect as well, resurrecting the demon and bringing devastation to the Order and the country. In response, they gather a small team including Rin’s exorcism school classmates, traveling to Kyoto to stop Todo and prevent a demonic disaster.

While it is nice to see the creators establishing what is and isn’t canon, the starting point of this season can seem a little jarring at first. Characters that reached resolutions in their character arcs during the first season take a step backward, instead moving toward new developments that align more with the original source material from the manga.

That said, most characters receive much stronger growth and development as a result, not least of which is Ryuji Suguro or “Bon.” Taking a primary role throughout the Kyoto arc, Bon’s character receives much more context and fleshing out than in the original run by introducing his father and the people he considers family from the Kyoto sect. He is expanded past being a stubborn and willful genius to being someone determined to become strong enough to support his family, doing what he believes his father never did following the “Blue Night” incident. The strained relationship between him and his father also runs parallel to Rin’s former relationship with his own father, setting up a great new dynamic between the two which provides both conflict and understanding as the season progresses.

Rin and his brother Yukio also see much stronger character arcs, focusing more on their coming to terms with who and what they are. Following the events of the original series, Rin is terrified of hurting others should he go out of control again. For this reason, he focuses on controlling his own powers throughout the majority of the season to prove he is more human than demon, all the while trying to reconcile with his classmates who now see him as a potential threat. Yukio, meanwhile, must come to terms with his own views toward his brother. Having become an exorcist to protect his family from being endangered by demons, he struggles to decide whether he should further restrict Rin from using his powers or support him using them to protect himself and others.

While several other characters get their moments, it’s these three that really steal the show with how they legitimately feel more three dimensional by the season’s end. They move past their shonen character archetypes to feel more human and relatable, helping to keep the story engrossing.

Much like the first season, the Kyoto arc was an example of how great shonen anime can look when given the proper time and funds. Fight scenes are fluid and crisp with the bright and lively color work production studio A1 Pictures is known for. Blue flames dance across the screen when Rin dives into action, while demons bubble and ooze sickly green and white sludge. Particular attention was clearly given to fire for the arc, looking lively and wild in fights both big and small for both Rin and other fire based creatures who make appearances throughout the season. Yukio’s gunplay was also spot on, being fast paced and fluid while still providing clear direction for the combat that is easy to follow.

Calmer moments don’t stand out quite as much, but still carry the charm of manga author Kazue Kato’s art style. Characters facial expressions carry a softness that lends nicely to calmer exchanges of dialogue and exposition, and jokes are bolstered by exaggerated, goofy faces from most every character.

The opening and ending do well enough. The opening portrays good bits of action while the ending hits a more somber note, complete with moody still shots of the main cast. Both do their job and might be worth watching once or twice, but aren’t as iconic as the original series were during their run.

Music is still a mix of traditional instrumental and techno, lending an unusual flow to certain scenes that for the most part works. As the series progresses, traditional instrumentals take center stage and play up the stakes of the story terrifically. Overall though, they never take center stage and only serve as accompaniment for the action on screen.

The opening theme again uses a track by J-Pop band Uverworld. Named “Itteki no Eikyō,” the song lends nicely to the overall theme of the season’s story, starting off melancholy and then leading into more lively riffs. In contrast, the ending song “Kono Te de” by Rin Akatsuki clashes a bit with the sombre animation of the ending, feeling too energetic for what’s being shown. Both get the job done, and for fans of Uverworld the opening track is worth picking up when it becomes available.

With all this in mind, Blue Exorcist had a fantastic return to form after a lengthy hiatus. The Kyoto Saga arc nails many of the aspects that made the original series popular back in 2011 from its story to its fights, and lays a great foundation for future seasons of this fantastic shonen anime.

The Kyoto Saga was a great return for the Blue Exorcist anime, showing there is still plenty of enjoyment to be had through this supernatural shonen series.

Keenan McCall is a journalist and writer with a passion for animation. From video games to anime, anything that sets art in motion will get him talking and writing nonstop.
Previous FINAL FANTASY XIV Gets the Free Trial Experience
Next Bulletstorm reloads and goes Full Clip in new launch trailer