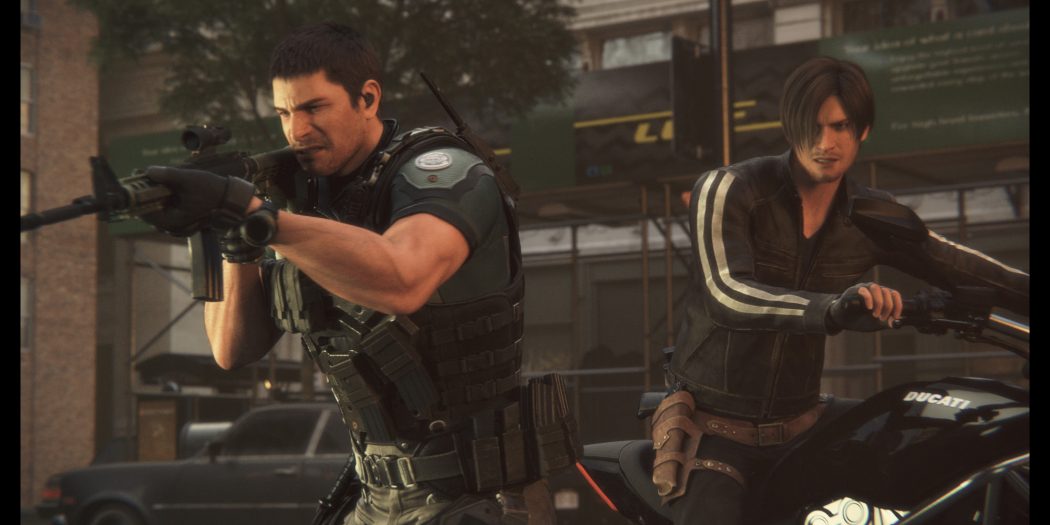 Capcom’s favorite horror property is continuing its comeback in a big way, with a smash hit game and now a new CG animated feature film.

Taking a bite out of cinemas

Resident Evil: Vendetta is the third animated feature to bear the RE name. The previous two installments weren’t exactly juggernauts, but both 2008’s Degeneration and 2012’s Damnation did find audiences, if I remember correctly.

This new flick should be even bigger, thanks in no small part to the main characters. In the world of Resident Evil, they don’t get too much bigger than Chris Redfield, Leon Kennedy, and Rebecca Chambers, and all three will be central to the on-screen action in Vendetta.

From the promo shot too, it looks like this one is set in the RE6 timeframe, which is kind of cool. Stuff in canon is always a good thing after all. And quite frankly, I still want to see how RE6 slid into RE7. Hopefully there’ll be a little exposition on the timeline in there.

Plot aside though, Vendetta is neat for another reason – you’ll be able to check it out in theaters.

“We are thrilled to bring ‘RESIDENT EVIL: VENDETTA’ to the big screen for its U.S. debut,” Fathom Events CEO John Rubey said. “This sequel is even scarier and more thrill-inducing than the previous titles, with mind blowing CG animation that should be seen on 40-foot screens with the highest quality sound and visuals to further enhance the fan experience of this beloved franchise.”

Nick Varley, co-CEO of Park Circus said, “We couldn’t be more delighted to be working with our colleagues and longstanding partners at Sony Pictures to be bringing ‘RESIDENT EVIL: VENDETTA’ to cinema screens around the world. We know that the thrills, adrenaline, action and incredible CG animation that characterize this long-awaited sequel will be welcomed with open arms by audiences across the globe.”

If you are, then you’ll want to head to Cineplex’ website on March 24th to buy passes for the Canadian screening, and Fathom Events’ site on the 31st for the US one. Despite the different sale dates, both showings will take place on the same day, which’ll be June 19th.

That’s a ways after the global launch, which will arrive first, on May the 27th.

Jason's been knee deep in videogames since he was but a lad. Cutting his teeth on the pixely glory that was the Atari 2600, he's been hack'n'slashing and shoot'em'uping ever since. Mainly an FPS and action guy, Jason enjoys the occasional well crafted title from every genre.
@jason_tas
Previous Marvel releases an X-Men ResurrXion trailer with a very familiar theme
Next CORSAIR Unveils New Tech