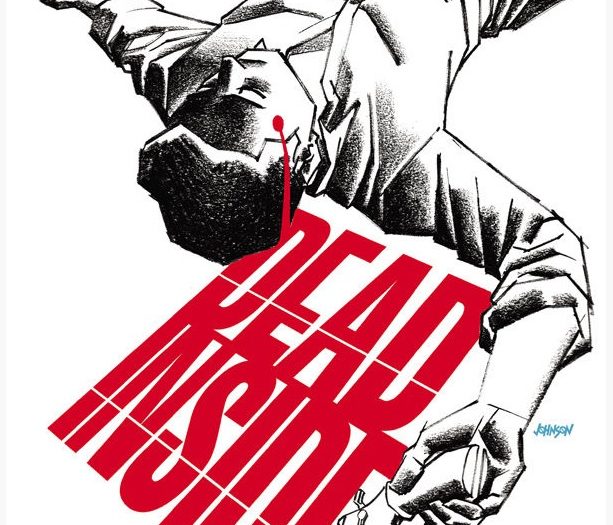 Dead Inside #3 starts with a CO holding a gun to his head. This rabbit hole is only just beginning. John Arcudi has plenty in store for his readers. 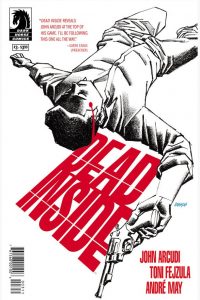 We open issue #3 with CO Paris holding a gun to his head. That cannot be a good thing. Detective Caruso is investigating the strange death of two inmates in the local jail. CO Paris was one of her contacts. Even one of her friends. How, and why, has he found himself at the end of his service pistol?

Paris is convinced that it was his pistol that was used in the deaths Caruso is investigating. He decided to play loose with his schedule without everyone knowing. That left his firearm in an unlocked desk, available to those who know where he kept it. So now he’s flipping out, and wanting a way out. So here we find him: standing outside his car, in front of both his friend and his wife, with a loaded weapon pointed at himself.

Caruso is able to talk Paris out of his feelings of a slump, and they head in for a cup of coffee. He still feels like garbage, and believes himself to be an accessory to the crime. The women in the room have differing opinions of what is going on, and how it happened.

Caruso Has A Hunch

Once Caruso gets that situation defused, she calls an old colleague, to run something past them. Caruso still has several leads to look into, but discussing things with a veteran detective may help make sense of what she is learning.

We learn that the jail continues to be a strange place, allowing prisoners out of solitary confinement, simply by asking for it. There is clearly more than meets the eye here. Hopefully in time we will learn more about the shady dealings behind this incarceration center. There a few sources inside, that could prove helpful. If they survive long enough, or don’t simply go missing.

Jail mysteries have a way of getting even more convoluted than most. Something more is at play here, outside the walls of the Mariposa County Jail. Why are folks from outside being involved in whatever it is going on, inside? Who’s really behind all this? These are questions that sill burn for Arcudi’s readers.

We are definately not near the end of this particular rabbit hole yet. John Arcudi is leading us in several directions. He obviously does not want this story to have a predictable villain. At least not yet. And who would it be, that they would have such influence to bring a good cop to put a gun to his head.

Down The Rabbit Hole We Go

Good cops trying to fall by the wayside. Are officials corrupt? Who really is pulling the strings around here? And where will detective Caruso find herself? Dead Inside is quite intriguing, I can't wait to see how things play out.

A fan of media on multiple platforms, I am always watching or playing something! Who knows what I will be on to next?
@mackeyp42
Previous Nintendo doubles down on 3DS support in face of Switch
Next The Flash Untouchable S3E12 (TV) Review