Flash learns what Julian is really up to, and gains some insight into the existance of Savitar. Find out more in The Flash The Present. 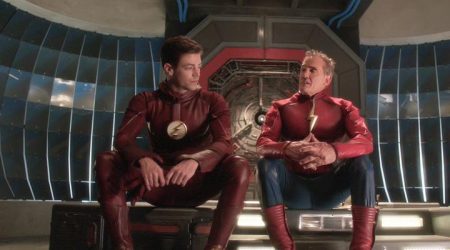 Four years ago, Julian led an expedition in India for what is called the philosopher’s stone. The philosopher’s stone is the stone that Alchemy has been using to grant metas their powers. Jump to present day, and HR has covered Star Labs in decorations for the holidays. Lights and tinsel everywhere. Everything starts off like a normal day, and Cisco starts to do some research into the philosopher’s stone when he begins seeing visions of Dante, his deceased older brother. The dissertation Cisco finds was authored by none other than Julian, barry’s ex-partner.

Barry takes a copy of the dissertation to Julian, seeking to learn what Julian knows. Julian is very hesitant to share any details, stating that they never found the stone they sought. Barry then asks about Savitar, which stops Julian cold. He tells Barry that it’s in his best interest to stop looking into it.

Barry decides to travel to Earth 3, to talk to Jay Garrick about what he knows regarding Savitar. Barry arrives just in time to stop the Trickster (Mark Hamill) from blowing himself and Garrick up after a botched bank heist. As soon as Barry mentions Savitar, they travel back to Barry’s Earth, to discuss their enemy at length, sharing any and all speedforce myths regarding the speed god. Garrick states that he is sticking around to help Barry prepare for what is to come.

Alchemy is using a building downtown to amplify his abilities, and grant all metas in the area, their Flashpoint powers. Garrick and Barry show up to stop Alchemy before he can grant these powers. This was a setup, as Savitar appears behind the speedsters, and steals Garrick away. Garrick is treated to a manhandling much like that which Barry recieved a few weeks back. Right as Savitar is about to put the finishing touches on Garrick, Barry knocks Alchemy unconscious and places the philosopher’s stone in its case. As soon as he does, Savitar disappears. Barry unmasks Alchemy to reveal the identity is Julian.

Julian is detained in the core, and denies all accusations of being Alchemy. Only when Barry reveals himself to Julian, does Julian begin to cooperate with Flash. Julian admits to having blackouts, and does not believe he is Alchemy. Julian tells Barry about the expedition, his team being found dead, and the origin of the blackouts.

Meanwhile in another section of the lab, Cisco is running tests on the container holding the philosopher’s stone, when he has a vision of Dante, his deceased brother. Dante is telling Cisco, that if he opens the box, then they can be reunited, family like they used to be. Longing for his brother’s return, Cisco gives in, and opens the box. While Cisco sees Dante, he actually has released Savitar. Inside Star Labs.

Savitar makes quick work of grabbing Barry and taking him into a secluded section of the lab. Barry is once again thrown around not unlike a child with a ragdoll. Against everyone else’s ideas, Wally rushes to help Barry. Savitar quickly grabs Wally, and begins to punish both of these speedsters. As Savitar is mere feet from making Flash-kebabs, Cisco comes to his senses, and seals the philosopher’s stone back up, saving the younger Flashs.

“one shall betray you, one shall fall, one shall suffer a fate worse than death”

HR admits to Joe that he agreed to helping Wally train in his speed abilities. HR points out that, if he didn’t, Wally would seek training elsewhere. Cisco is able to channel the spirit of Savitar through the box, and use Julian as a vessel. Savitar decides to share some vital information with Team Flash:

“one shall betray you, one shall fall, one shall suffer a fate worse than death”, Savitar claims to be the future Flash, and Savitar exists due to the actions of Barry.

Once the team has had enough of Savitar’s ramblings, Garrick comes up with a plan to rid the universe of the box containing the philosopher’s stone, and the Savitar held within. The two begin to run as fast as they are able, opening the speedforce, and launching the box into the speedforce itself. Once the box is launched, Barry is thrown fice months into the future. Barry witnesses Savitar re-emerged, executing Iris West in front of future Barry. As soon as this occurs, Barry is pulled back into his own reality by Garrick.

Barry freaks out over what he has seen, while Jay tries to calm him down. Jay tells Barry this is precisely why speedsters choose not to run into the future: No one should know too much about their own future, it may be disasterous.

Cut to the West home, where eggnog is had by all. Team Flash give Wally his much awaited gift: the Kid Flash speedster suit. Julian suprises everyone by showing up to the party. Barry’s resignation papers were never processed, so Julian invites Barry to resume his job sharing the CSI office.

Seeing Savitar dispatched by a pair of Flashes is a great feeling. The universe is starting to right itself from the Flashpoint event. Julian is coming around to being a friend in Central City. Romantic entanglements are falling into place. It seems CW is putting things in place for some very dynamic stories in the future. I don’t know about you, but I am looking forward to see where the stories go from here.

A fan of media on multiple platforms, I am always watching or playing something! Who knows what I will be on to next?
@mackeyp42
Previous Doom free update 5 has arrived
Next Eternal Descent Sirian #1 (comic) Review