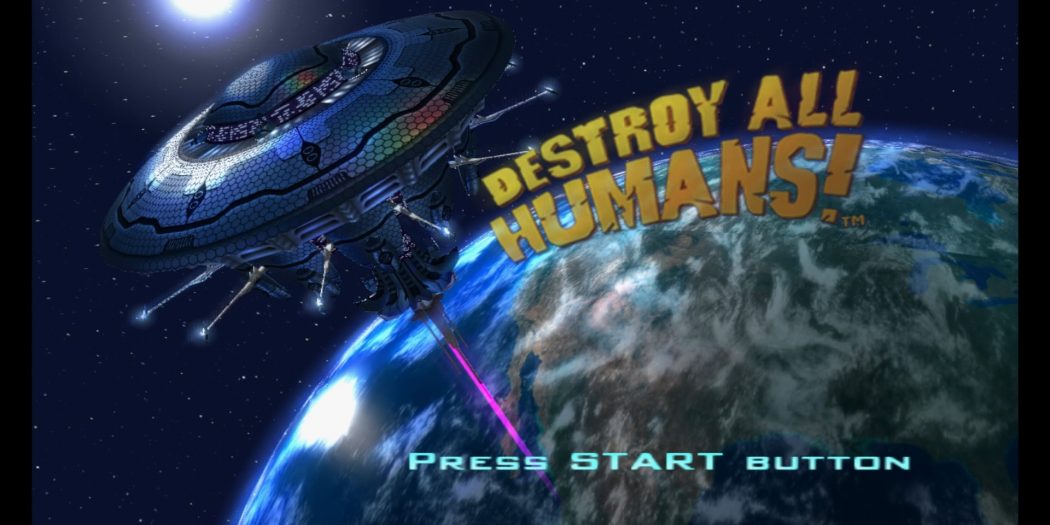 Destroy All Humans! (DAH) first released in June of 2005. 11 years later, the parody of cold-war era alien invasion films lands on the Playstation 4 as a PS2 remaster. The game holds up pretty well, too.

Seeing as DAH is a rerelease of a game that originally launched on the PS2, it is important to note a few things right off the bat. The game does not have cutting edge graphics. The sound design ranges from okay to good. The controls, however, feel as fresh and as tight as they did back in 2005.

I’m not going to sugar coat this part. This game’s plot is predictable throughout. The opening cut scene has Cryptosporidium-136 (Crypto; all of the characters are clones, and deaths are differentiated by numbered lives.) getting killed and captured at a military missile launch site. The rest of the game is Crypto-137 trying to rescue, 136, and then destroy all humans.

Lots of tropes are played out, including the misnaming of different real world places and people for inclusion in the game. Washington D.C. becomes the Capital City. The Pentagon becomes the Octagon, and so on. Throughout the game, the missions the player carries out are covered up by the government and the media. Accidents are written off as the work of communism.

The plot is not the best, but it is absolutely serviceable for what DAH wants to be.

DAH plays exactly how I remember it playing when it first launched in 2005. The controls are crisp, and Crypto responds exactly how you, as the player, expect and want him to. The game really shines when you start looking at the powers that Crypto can use on people and the environment.

Crpyto has a few psychic powers that he can use to bend the environment to his will. He can use psychokinesis to lift and throw people, cars, tanks and buildings. He can implant commands to make people do his bidding, and he can read minds. He can also extract brain stems simply by focusing really hard on the person’s head, too.

For weapons, Crypto has a variety at his disposal. These include an automatic probe, a chain lightning gun and a disintegrator ray. The weapons are all fun and diverse.

The game also allows you to upgrade your powers and weapons in a way that is satisfying.

Oh. You also get your own upgradable flying saucer that you can wage war with. The saucer controls naturally and it feels good to destroy a town with the vehicle. 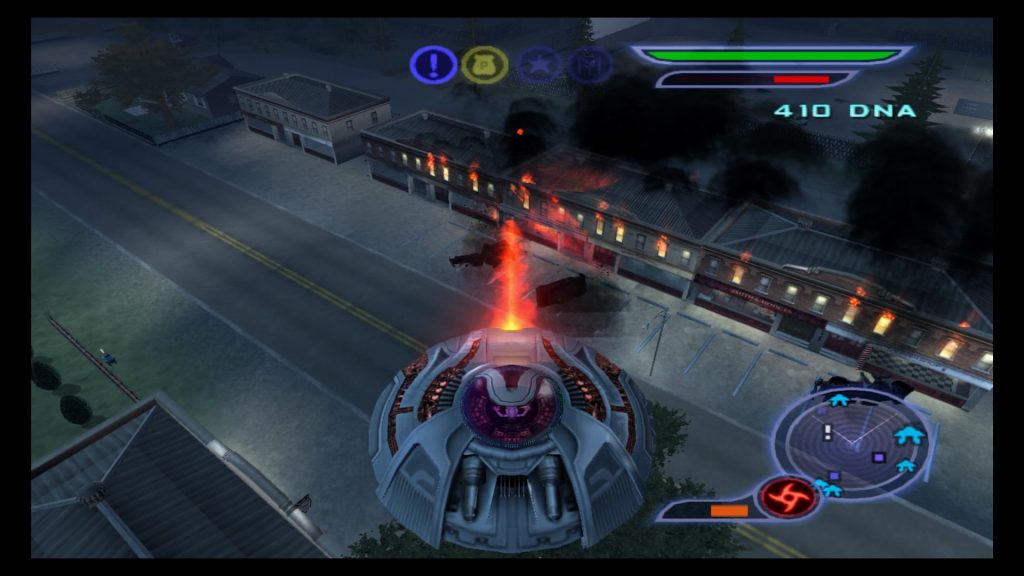 The accepted idea is that the sound and graphics have been updated a bit since the initial PS2 release. Honestly, if you take a look at the two side by side, I am sure the PS4 version looks superior, even if only a little bit.

The graphics aren’t cutting edge, but I don’t need or want them to be. They look how I remember them looking. DAH exists in an area of cartoonishness that makes me not worried to see a full photorealistic remake. I am happy with the way the game looks, and honestly, if the game looked a ton better, it wouldn’t have the same charm it has held for 11 years.

Sound design is on the same level as graphical design, but maybe upped a little bit. The sound doesn’t age nearly as much as the graphical design does. The voice acting is solid where it stands, and sound effects are spot on.

The one complaint I have for the sound design is how limited the mind reading scripts are. After reading three or four people’s minds, the lines start repeating. I can look over this, though, given that the game came out 11 years ago.

An “invasion of fun”:

I can’t believe I used that for a subheading. Anyway, though, if invading a 1950’s red scare infused earth sounds like a good time, DAH is definitely the game for you. The game will always hold a sweet spot for me due to its place in my childhood, but even today, the game holds up to my staunchest critical ideals.

When you aren’t directly fulfilling mission requirements, you can harvest brain stems for DNA for your upgrades. The system is smooth and works for the structure of the game.

From your first cow harrassment, to the desecration of Capital City, Destroy All Humans! is a great purchase for $20.

Blast from the Past!

Destroy All Humans! is a true blast from the past. Invading 1950's, red scare infused earth, you are tasked with harvesting DNA to save your alien race. Through a variety of missions, you get to play around with an alien's full arsenal. DAH is a worthwhile addition to any PS4 library, especially if you have fond memories of the game's initial launch in 2005.

Erich was introduced to gaming by his grandfather before he could walk. Since then, he has grown up loving Nintendo and most games in general. He couples his love of videogames with journalism to cover news, provide reviews and tell it how it is in the gaming world.
Previous There’s some… odd nudity in Watch Dogs 2
Next Britannia #3 (Comics) Review