Dreams of a dark goddess and rumors of human sacrifice abound in Rise of the Black Flame #2. 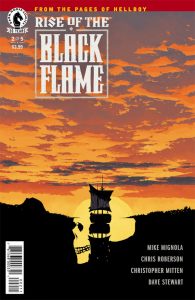 If you missed our write-up of Rise of the Black Flame #1, you can find that here.

Suspense continues in Rise of the Black Flame #2

We follow Ms. Jewell and Ms. LaFleur as they pick up a guide and venture further in search of the source of the missing girls, as well as the rumors of human sacrifice.

So this arc began with book #1 told us of disappearing girls, and now we are made aware of possible human sacrifice. You know you’re in for trouble when, being told that money is no object, people don’t want to join you.

Mignola and Roberson certainly know how to get under your skin, and keep you on the edge of your seat here. And why not, we thought the wild streets of civilization were bad? Amidst mysterious rivers and dense jungles, could be hiding any nature of man or beast. Right? Luckily some of these travelers know what to look for.

Now that we have a bit more information on Ms. Jewell and Ms. LaFleur, and seeing some of their associates, we’re getting a pretty good idea of the sort of team they are becoming. They are beginning to resemble another team that I won’t name here, but if you’re following this arc, you may have an idea of what I mean.

Again, we get a glimpse of the bad guys, though what exactly they are up to, is still quite elusive. I imagine Mignola and Roberson will keep us on the hook until book #4, before we have a good idea of what the Cult of the Black Flame are really up to.

I forgot to welcome Christopher Mitten to the Mignolaverse. Prior to this series, I was not familiar with his work, though it is a perfect fit. With a blend of cartoonish fun and realistic grit, Mitten puts you right in the story alongside LaFleur and Jewell, so you may want to watch your backs. There’s still plenty of adventure ahead, so don’t go anywhere.

Rise of the Black Flame #2 builds on the groundwork of #1, so don't miss your chance to follow along where this cult descends - or ascends from.

A fan of media on multiple platforms, I am always watching or playing something! Who knows what I will be on to next?
@mackeyp42
Previous Harbinger Renegades #1 (Comics) Preview
Next Want to go to a free Dishonored 2 community event?