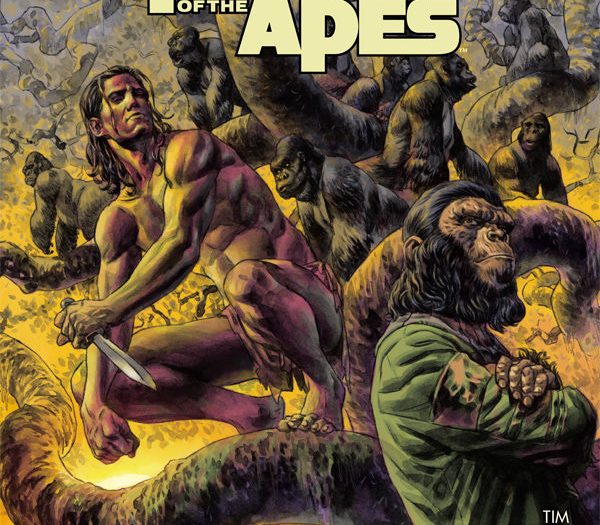 Tarzan on the Planet of the Apes #1 (Comic) Review

When I first heard that Dark Horse was doing a crossover between Planet of the Apes and Tarzan, I was really excited. Two of my favorite properties were going to be unified in a modern comic, and I couldn’t wait to dig into the pages.

From the first page, ToPotA does great work in terms of fan service and beginning to build on a cohesive story in its own right. 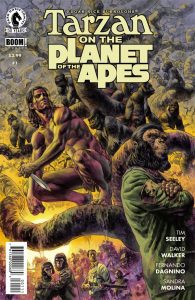 To be fair, a lot of the plot in the first issue of this book acts as expositional world building. The premise of the story is explained in the way that people who are familiar with both properties will understand what is going on. The bad news, is that if you aren’t familiar with the properties detailed in the book, even the scant explanation offered wont save you.

This doesn’t bother me, but I could see someone intrigued by the idea of Tarzan and the idea of the Planet of the Apes being put off by not knowing anything that is going on the book.

Throughout, the writing is solid in presentation. I like the idea that language works differently here than it does in standard Tarzan worlds. Another nice thing that the writers do is add in specific words or pieces of ape language. These words are sprinkled in throughout the book, and their translation is placed at the bottom of the page.

This integration makes the language feel fluid and real. This also works far better for me than it would have if the writers presented the language as being purely translated into English and presented and such.

The characters, as much as I know them anyway, feel real enough, as though they were ripped from their source material. It is really nice to see Zira, Cornelius, and Kerchak on their own and interacting. 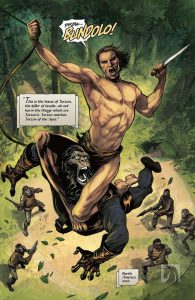 The interactions are well done, and the characters act how I want and expect them to. This is good to see, especially when you consider that the characters involved are literary and film character who range from nearly 50 years old to just over 100 years old.

The artwork in ToPotA really makes the book. The characters from Apes feel like they were torn right from the screen, and Tarzan and his company feel accurately portrayed.

There really isn’t much else to say in terms of the artwork. I really enjoyed reading through this first issue, and the artwork is a major reason for that.

Tarzan on the Planet of the Apes is a great first step, even if the exposition can be a bit muddled if you aren't a veteran in the series.

Erich was introduced to gaming by his grandfather before he could walk. Since then, he has grown up loving Nintendo and most games in general. He couples his love of videogames with journalism to cover news, provide reviews and tell it how it is in the gaming world.
Previous Bloodstained: Ritual of the Night Receives Delay
Next The Last Guardian gets hit with another delay 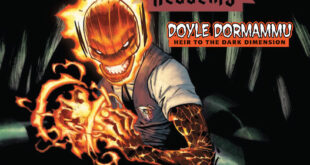 Trick-or-Read! Marvel celebrates Halloween with a selection of new books

Getting in the spirit of the season-to-come is Marvel Comics, as the publisher has announced …