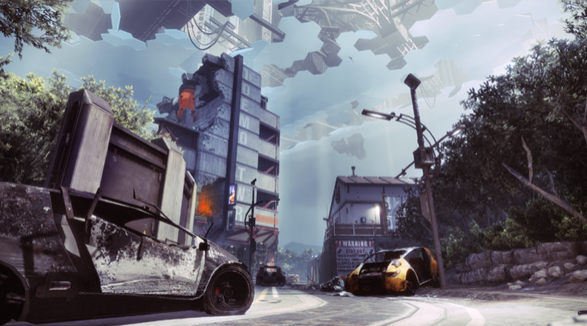 I’ll be honest: my first impressions of the Titanfall 2 Technical Test were not positive.  Why did everything feel so different?  Why were pilots and Titans both so sluggish?  Where was the Smart Pistol?  Where were the awesome maps, the verticality, the wall-running routes?  At least the grappling hook was cool, I told myself.  And also, where were the titans?

By the end of that first weekend, my excitement for the follow-up to one of my favorite games from this generation was hampered (to put it mildly).

Things changed.  It was obvious.  But Weekend 2 has changed too, and with it, Respawn Entertainment has fixed numerous player gripes.

There’s still work to be done, differences to get used to, but the game now is at a much better place.

From the get-go, the changes from Titanfall the first are obvious.  Fans clambering for more titans has resulted in titans that are simply less customizable.  Gone is the balanced trifecta of Atlas-Ogre-Strider.  Weapons are locked to chassis, skills, and the all powerful cores, meaning there will be no mixing and matching here.  If you want to try the pilot-shredding Molten Shield, you’ll have to give up a dash.  The two titans on display have fewer of those, as a whole: one for the Ion and zero for the Scorch Titan.  Fortunately, titans get a perk that lets you add another dash, bringing the Ion to the Atlus’s two and the Scorch to the Ogre’s one.  With the faster dash refresh time introduced in the second weekend, Titans have regained some of their offensive presence.

Defense, on the other hand, is a different dance entirely.  Without a rechargeable shield, Titans are significantly softer, and even Pilots poking at you from across the map with grenade launchers are doing permanent damage.  This permanence is offset by the new battery system, which is itself a replacement of the old mounting choreography. 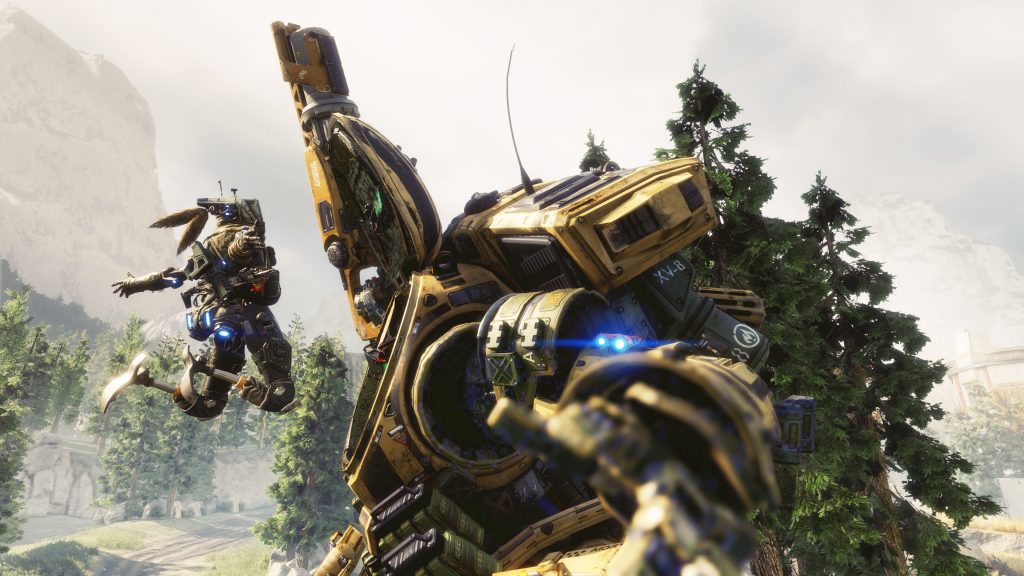 Players no longer rip off a piece of the titans’ skulls in order to shoot their brains, exposing themselves to electric smoke and enemy fire while unloading LMGs.  Instead, they pluck out a titan’s battery (or, once the battery is out, drop a grenade inside) for an automatic chunk of damage.  Player action is no longer required during the mount, and the animation and damage are so quick that a titan’s electric smoke barely has time to threaten the pilot.  And forget about dismounting to pick them off- by the time you’re out, the pilot is on their merry way, battery in hand.

That battery can be brought to ally titans to give them a shield and restore their health.  Jumping from titan to titan in a mess of a battle is exhilarating, and the added element of teamwork is enjoyable (the old option, shrieking at your teammates to get the pilot off of you, remains, though your partners will need to be much quicker).

In the interplay between pilot and titan, the pilots have definitely been given the edge.  With the grapple hook, a pilot can easily take down an entire titan by himself, leaping off and pulling himself back on several times without ever stepping on the ground.  Titans, be wary: if you see a pilot flying towards you, punch wildly, or suffer the consequences.

Of course, if you kill the pilot, you can take back your battery and a chunk of health.

Attrition, the most played mode from the first Titanfall, the one that pit players against players, titans against titans, the one that introduced AI into multiplayer in a uniquely creative way, is absent.  While I doubt it’ll be gone from the main game itself, it’s bewildering to find it missing from what is not just a technical test, but a chance to introduce new players (those who skipped on the first due to the lack of a single-player mode) to exactly what makes Titanfall so unique and fun.  Instead, the test features Pilots vs. Pilots (essentially a quick moving Call of Duty), Amped Hardpoint (the traditional 3-point capture- which at least has Titans), and Bounty Hunt (where players collect AI kills and drop off money at points on opposite sides of the map).

The last is the only one that actually puts all the pieces of Titanfall together (pilots, titans, and AI), but the neutral cannon fodder has truly become cannon fodder, and the distance of drop zones and drop off points means that, often, you’re blasting nothing but AI, while the opposing team does the same on the other side of the map.  While a fun mode in its own right, it lacks the furious energy of Attrition.  And the AI certainly doesn’t feel as alive when they’re not saluting you or thanking you, or otherwise being happy to have you wiping their butts.

The maps (especially Homestead) aren’t quite as accessible to wall-running as, say, Angel City, and they work well enough.  Homestead, unfortunately, suffers, especially in a mode like Bounty Hunt, which demands players put themselves in titans’ way without proper cover if they want to earn quick money. 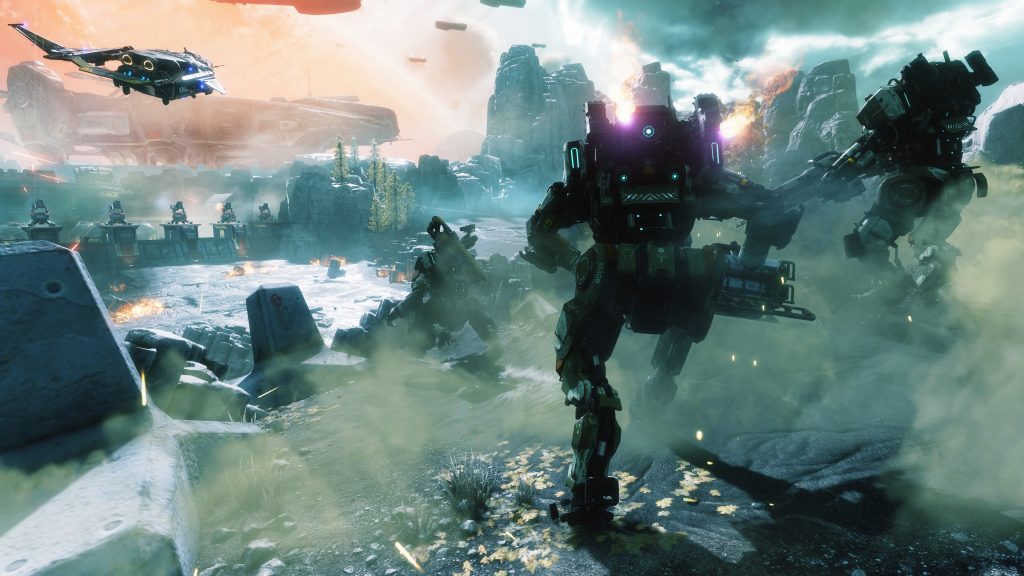 There are oddities to Boom Town as well, where you’ll be in the center of the map and warned that you’re out of bounds.  Awkward geometry stands in the way of what seemed like natural routes, and a poor jump may find you disoriented by foliage and bullets from all sides while, a couple seconds later, you self-destruct for leaving the battle.

The map introduced during the second weekend, Forwardbase Kodai, is the strongest of the three, balanced so that pilots and titans both can be effective, with plentiful routes to wall run and a bounty of windows with which to play with your opponents.

Pieces are missing from the Titanfall 2 Technical Test.  There’s no Smart Pistol (which was largely detested, but hugely fun to use, and helped to differentiate Titanfall’s weapons from the genre).  Burn Cards are missing entirely, and with them the addiction of collecting and using the right ones at the right time.  I can still remember, in the later months of the first game, when the player base was smaller, running into clans we’d faced before.  Close matches inspired the use of the greatest burn cards by both sides, and matches would begin with twelve titans on the field as both clans vied for dominance from the get-go.

Without Burn Cards, there’ll never be a feeling again of putting everything on the line in one glorious firefight.

I’d also prefer if entering your titan was kept in first person, as the rush of getting in is largely gone.  For a game about the relationship between titan and pilot, it seems strange to pick away at the immersion for animations that look no cooler for being removed from the player’s perspective.

But this was a Technical Test.  Respawn has already shown they’re eager to hear player feedback and implement it into the game.  Time will tell what the final product will look like, if it’ll have Attrition, Smart Pistols, or Burn Cards, but one thing’s for sure:

I’ve got my preorder locked in and am standing by for Titanfall.

Brutal Gamer's Nintendo Editor began his gaming life a little late- at five years old. But he's made up for it in the two decades since, gaming and writing about gaming with the same passion, fervor, and unrelenting love as his five-year old self.
Previous Prepare for Another Nintendo Direct
Next PlayStation Plus September 2016 free plus games lineup