Hellboy might have been through hell as of late, but he’s still up for a new adventure. Dark Horse has officially announced Hellboy: Into the Silent Sea for 2017.

The sea was angry that day my friends…

How does an all-new, original graphic novel from Hellboy-creator Mike Mignola sound? If you’re a fan of the supernatural hero, chances are it sounds damn good.

Apparently not as done with the character and his universe as previously mentioned, Mignola headlines a fantastic lineup of talent. Working on this Hellboy graphic novel will be artist Gary Gianni, and all-star colorist Dave Stewart. 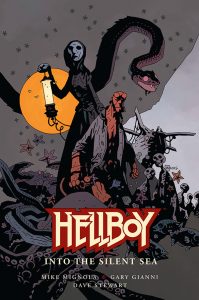 The team will be bringing to life a tale that directly follows a Hellboy classic – The Island.

Hellboy sets sail from the wreckage of a deserted island only to cross paths with a ghost ship. Taken captive by the phantom crew that plans to sell him to the circus, Hellboy is dragged along by a captain who will stop at nothing in pursuit of a powerful sea creature.

Though you might be familiar with the name in relation, this isn’t Gianni’s first go-around with Red. The artist worked on a series of tales that backed up Hellboy issues not all that long ago called the Monstermen.

He’s also worked with Michael Kaluta on the Shadow and penciled tales from George R. R. Martin, Harlan Ellison, Ray Bradbury, and Michael Chabon. So the guy knows his stuff is what I’m saying. His won’t be the only art featured here, as Mignola himself will provide the cover illustration. Interiors though, will be all his, and he’s just a teensy bit excited.

“I imagine if Hellboy: Into the Silent Sea were a movie, the Hollywood hyperbole would describe it as Hellboy’s greatest adventure,” said Gary Gianni. “Yes… it’s Hellboy as you’ve never seen him before, laughing , loving and battling his way across the stormy seas! You’ll be thrilled as he faces cosmic forces terrorizing a haunted ship manned by a desperate crew! Be sure not to miss Hellboy: Into the Silent Sea, the biggest comic book event of the year!”

Set for arrival on shelves some time next year, the Hellboy graphic novel, Hellboy: Into the Silent Sea can be pre-ordered now via Amazon or Penguin Random House.

Jason's been knee deep in videogames since he was but a lad. Cutting his teeth on the pixely glory that was the Atari 2600, he's been hack'n'slashing and shoot'em'uping ever since. Mainly an FPS and action guy, Jason enjoys the occasional well crafted title from every genre.
@jason_tas
Previous Need for Speed No Limits updates with Devil’s Run
Next Columnae: A Point And Click Adventure Set In A Post-Apocalyptic Steampunk World Successfully Funded