Platformers are one of the oldest types of games that exist, as well as the most iconic. Ever since Mario debuted on the NES in 1985, platforms have been part of the face of gaming. Hundreds if not thousands of platformers have been created over the years, with constant innovations and polish being put into them. Prog.1, by Vector Arcade, is one of these thousands of platformers, just released last month. The question is, does it do enough to break out of the tidal wave of platformers and stand on it’s own?

How does it work?

As mentioned before, Prog.1 is a platform and as platformers go, it has a simple core. The goal of each level is to gather a certain number of glowing red lights, which will allow the player to open the door at the end of the level. Along the way you hop on blocks and platforms, avoiding falling into the abyss below you. Where the game separates from other platformers is in the nature of the levels. There are quite a few tricks the game throws at you in order to keep you on your toes.

First of all, nearly all of the blocks you can jump on dissolve, some faster than others. There are also platforms, with two different varieties. Ones that swap out with instant death areas every two seconds, and ones that teleport at 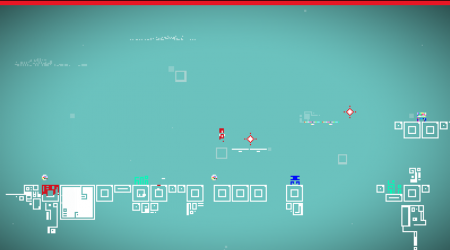 similar rates. Said instant death areas also flicker in an out of existence throughout the rest of the game, sometimes existing permanently. Other obstacles include blocks that explode, turrets that shoot at you, and bridges that must be activated and disappear quickly.

The difficulty is a little all over the place curve spikes and drops at random intervals. At one point mid game, I encountered a brutally difficult level, which killed me a dozen times in the first three seconds. After that level however, there were a few levels that were so easy there was practically no challenge. It left me feeling confused and frustrated

A problem with the game is that the difficulty can very easily veer into the realm of being unfair. The controls feel a little sticky and take some time to get used to, causing many annoying deaths. What’s more, the aforementioned platforms that teleport and disappear can be a little hard to tell apart, leading to unfortunate accidents. Prog.1 can simply cause too many annoying deaths.

That being said, the game comes alive during levels with reasonable difficulty. If a level isn’t too long, it can do very interesting things with the mechanics. One memorable moment is when I had to teleport down to the bottom of a level. I had to time my jump perfectly to get the red light for the level, as I had to wait on a disintegrating block for the platform to teleport back.

There are a lot of tiny moments like that that help make the game enjoyable. Sadly they tend to be more the exception than the rule, but there are more than enough to make the game interesting. Sadly it’s a brief interest, and it feels like more could have been done with it.

The story of Prog.1 is very minimalistic and vaguely explained, and not in a good way. The problem with the story is that takes being minimalistic too far, and ends up not having much of a story. In-between levels, the player is treated to cutscenes of a pair of scientists working with a super computer. 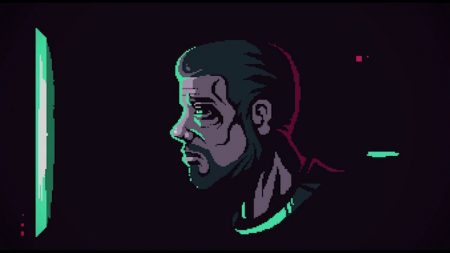 The implication is that the player is controlling some sort of virus that is gaining sentience, with one scientist trying to nurture it. However, eventually that scientist murders the other for unclear reasons, and the player never sees him again. The story then ends on a confusing note that comes far too soon. The player is treated to a bit of random philosophical rambling and the player character dying.

There are notes that can be collected in the levels that seem to be written by the head scientist. There are some amusing moments, such as him complaining about a poorly written novel, but they add little. Some of his musings can be interesting to read, but they don’t add to the overall story. Overall, the story feels like a handful of interesting ideas that were never fleshed out or connected.

However, there is one area where the story excels, in the department of atmosphere. All of the gameplay takes place inside of the supercomputer the scientists work on, and it is very well designed. Bright colors make up the backgrounds and the blocks are all white outlines that turn red as they fade. The instant death areas are displayed as static and the computer world being unstable, and grow in intensity as the game progresses.

Put together with the music, which is simple and charming and the player can find themselves sucked in. It truly is a shame that the story is so incomplete, as the game shines when it relies purely on atmosphere.

In conclusion, Prog.1 is not a particularly outstanding game. It has more than a few problems. There’s frustrating and inconsistent difficulties leading to constant deaths and a vague and unfulfilled story. It has its moments however, of interesting and enjoyable moments, as well as an engaging atmosphere. At its low price of eight dollars, it’s a novel and enjoyable way to spend an afternoon for those who are curious in it. Though it most likely won’t be a particularly memorable afternoon.

Prog.1 is available for PC and Mac

Not bad, but not great

Prog.1 isn't a waste of your time and has interesting ideas, but the frustrations and poor story guarantee little staying power.

A recent college graduate and life long gamer, David is now working as a freelance journalist.
Previous The art of war – Dark Horse announces The Art of Battlefield 1
Next Art and details abound in Art of Gears of War 4