Battleborn comes out packing to stand out in the year of Character Action titles. 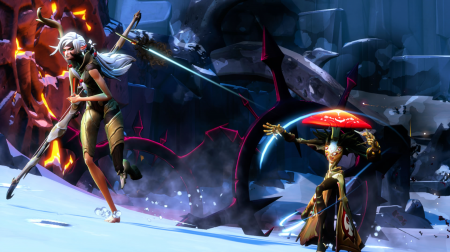 Battleborn is a MOBA for action fans. It turns the unapproachable genre into an accessible multiplayer title. One lane makes progress visible. Obvious objectives show victory within reach. And a simpler, more concise progression set-up makes the match by match leveling systems easier to understand.

Gameplay is rich and hectic. Mechanics are tight and straightforward. The humor is brash and enjoyable by many ages (as per its “T” rating). The combination makes for a dense multiplayer experience that rewards mastery without barring newcomers.

And Battleborn does it all without sacrificing other modes.

But let’s start with the competitive multiplayer. Battleborn sees teams of five put together squads of oddball characters (Redneck bird with rocket launcher? Check. Penguin in a mech suit? Check. Mentally challenged clone? Check.) to bring into one of three modes.

The first is Conquest- easily understandable and familiar to FPS aficionados. Three points- A through C- focus the action. Those who capture and hold them reap the benefits of points (first to a thousand wins), but those who leave them behind to seek the maps’ (there are two) riches won’t be disappointed. Experience abound. Gold lies in abundance. A collection of both will turn struggling, low-level fungal monks into hardened supports ready to carry the team on their shoulders. At least until the match ends, when level and equipment are reset and players start again at base level one.

Which isn’t to say there’s no progression. There’s plenty- characters all level individually (to 15), unlocking colors, taunts, and new options for skill-upgrades in match, while player profiles also work their way to 100, unlocking characters, loot packs, and credits (generally spent on more loot packs, or, eventually, DLC characters- five of which are confirmed, and five of which will be available to purchase without spending a dime of real money). Players will also be driven to complete each character’s Lore quests, which tell you more about a character’s history once you finish individualized quests. Finish all five quests to receive a new title, a new taunt, and a new color, showing your dominance with your favorite Battleborn.

Conquest will be the easiest to grasp for players not familiar with MOBA games. The matches are quick (they rarely time out at the 15 minute limit) and frenzied, and there’s little time wasted on anything but the objectives.

Next comes Incursion. The single-lane maps (though with plenty of flanking routes) operate under MOBA rules. Teams push creeps to sentry turrets, destroy them, and move onward to the next, all while the opposite team attempts to do the same in the same space. But the action comes much more furiously than most MOBAs, due to the map and game’s design. This is an action title, first and foremost. You’ll be leaping around shooting for headshots far more than worrying about things like jungle spawn timers or item builds. While both of those are still there- Thrall mercenaries who can often turn the swing of the tug of wars and three item builds- and are still important to maximize your team’s effectiveness, they can both be ignored without ignoring success. At least in the beginning. 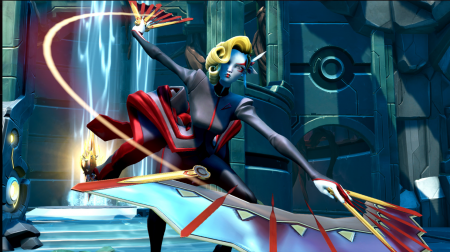 While it’s difficult for me to say exactly how well Incursion explains its complications, as I am so largely familiar with the genre that inspires it, it’s easy for me to suggest that it tries its best. The start of every match features a holographic power point that explains the rules while you and the rest of your team get to jump around and test your skills. Even after you’re let out of the gates and race down the lane for early gold and tower advantage, you can still pull up a list of all your skills with the press of a button, and examine your helix to explore your options. The game also is sure you know what’s going on at all times: you’ll be alerted when your sentries are under attack, when the Thrall camps have been captured, or are being attacked, by either allies or enemies. You’re rarely unsure where damage comes from, and there’s even a small summary (though often incomplete) upon your death that tries to help you figure out what to do better.

The last mode is Meltdown, and the maps generally feature more lanes for creeps to run down in their attempts to reach the enemy base, where they are churned to mush (and points). Each wave is a minor escort mission against the enemy, and while I’m not as fond of the mode as the others (team composition is all the more important, as those left without the ability to clear creeps quickly will feel the brunt of the minions’ advance, and it’s harder by design to keep track of every single point), there’s still fun to be had by players willing to communicate.

Each of the three modes stars two maps (each unique to each mode for a total of six) that are built in such a way as to feel like any team composition has a chance. They’re visually enjoyable, and run the gamut from green Overgrowth to the oranges of desert Outback. While we’re mostly past the era of brown shooters, Battleborn doesn’t rest on its cel-shaded laurels. It pushes its primaries, and relishes in all the shades of its maps and characters. Despite all this, characters are still easy to make out and keep track of, and their bullets and rockets and magic only more so.

Of course, if you’re not one for competitive multiplayer, for demanding moment to moment action that pushes your reflexes and teamwork, then Battleborn hasn’t necessarily abandoned you. The game still has a full four player co-operative element. Eight missions may be few, but they’re built in such a way as to be re-playable. The mode shares the same game-wide progression as competitive, the same characters, and the same mechanics. You spend money on pre-selected item builds. You level from one to ten every match. And you select from the same list of 25 (now 26, and eventually to be 30) Battleborn. This means each run through each map is hugely different. The last mission on Advanced is hard enough with a ranged character, but wait until you’ve tried to run down the boss as a melee fighter.

Two difficulties (plus hardcore modes for each) mean you can find the right level of challenge for you and your friends, and there are as many rewards for single-player as there are for multiplayer- and as many opportunities to work towards character lore challenges. 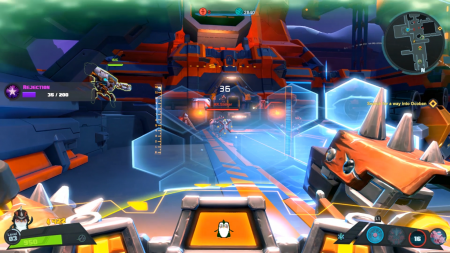 The missions themselves are varied- there’s an escort mission in which you lead a super sentry bot across a map while constantly spending gold to give it temporarily powerful defenses, and a map that’s more or less a flurry of boss battles in a single huge arena. Gearbox’s humor easily finds its way into the dialogue and boss designs (my favorite being one that was featured in the beta as well: a giant robot named Geoff who is roleplaying as the king of the arachnids), and the battles and arenas are memorable.

To get the most out of the co-operative game mode, however, you’ll want to also dabble in competitive- some lore missions can only be completed in conjunction, while some items work best in other modes. In fact, the same is true of the opposite. Some of the best items in competitive are found by grinding the co-operative levels.

Battleborn is a full package, filled to the brim with unique and infinitely-quotable characters and gameplay that shines whether you’re dancing around a single opponent or engaged in a full-scale skirmish over a Thrall camp, with skills and spells slinging from all ten players. Issues are minor- death recaps sometimes alert you to only a small percent of the actual damage you’ve taken, and late-game sixty second death timers will never not be off-putting.

But Gearbox is prepared for the long-run. They’ve promised new maps, modes, and characters, new taunts, colors, and story missions. Much of it for free. And balance patches have already struck the game, including one that changed map geometry, among other things. Battleborn, like many multi-player focused titles of this generation, is a service; fortunately for this one much of the cost comes in the overhead. A twenty dollar season pass will grant story missions and taunts, but those afore mentioned promises are also promised to be free.

I find myself patient. There’s so much here already that I’m prepared to spend the year diving deep into the meta that’s already formed, to run for gold, fight for Thralls, and war for victory. If you’ve ever been a fan of first person action titles, or found MOBAs to be intriguing but just a little too inaccessible, then I urge you to give Battleborn a try. You won’t be disappointed.

Battleborn takes the best mechanics of MOBAs and leaves the worst behind to create a character-based action title that reinvigorates the sub-genre.

Brutal Gamer's Nintendo Editor began his gaming life a little late- at five years old. But he's made up for it in the two decades since, gaming and writing about gaming with the same passion, fervor, and unrelenting love as his five-year old self.
Previous Celebrating 30 years, Dark Horse Day is June 4th
Next Hasbro reveals new Wolverine and BAF Juggernaut