Kart racers are a well-tread path in today’s gaming climate. Lots of different companies make them with hopes that they can create something similar to Mario Kart, in order to take away some of that veteran’s clientele. Coffin Dodgers takes a unique spin on the kart racing genre in a way that is successful for what it tries to do.

The game offers two main ways to play, as players can play in the single player modes, or in local split screen. There is no online multiplayer to be found in Coffin Dodgers, but that may not be a bad thing.

In single player, players can race through a story mode, time trials, and can explore the open world in a free roam mode. Time trials and free roam are pretty self explanatory.

Players pick their character and can drive on a specific track to break their record, or can drive through the open world. The open world offering has a mode about collecting items. This brought back memories of playing the Crazy Taxi games and The Simpsons: Road Rage. Although it is only a side mode, this scratched the itch I had for this genre.

In split screen, players can race around on the tracks unlocked in story mode, and free roam in the exploratory mode. There isn’t much to explain here, as these are pretty much laid out above, but with additional players. It should also be noted that on the Xbox One version, the game supports up to four players.

The story mode is what will take up most of your time though, as a player in Coffin Dodgers. The Grim Reaper comes to a sleepy retirement village. He brings the zombie plague with him, and before the end of the game, he will take the souls of six of the seven residents of the retirement community. You select your character and get to racing.

The difficulty is the one aspect most worth noting when discussing the story mode. Each race is pretty easy, except when it isn’t. On my play through of the story, I came in first place of every race on my first try, save for two tracks. On each of these tracks, no matter how many times I replayed the race, I was unable to do better than fourth or third. This might not be too big a deal for me if the spike came towards the end of the game, but the hard races were sprinkled throughout in a way that made me scratch my head. 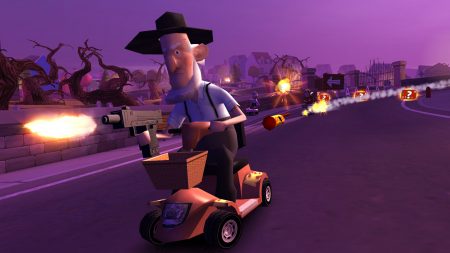 The story progresses in a series of four grand prix and a final showdown. After each set of races, the racers with the lowest scores are cut, and their zombie corpses return in the next set to challenge you from beyond the grave.

This progression system works, and as a result the story was stronger than any other kart racer I have played. It only took about an hour to play through, but that only added to its brief charm.

Kart customization also needs to be mentioned: players can use gold they earn in the previous races to upgrade their cars. This is not that big of a deal, though, and the upgrades are expensive and didn’t help me too much. The added customization options are nice however.

The short duration means that it will be possible for people to play through the game as different characters over and over again. It’s obvious that the story mode was the developer’s main intent.

One big problem that I have with the story mode is the track differences. All of the races take place in the same town. This means that multiple tracks will use the same stretches of road over and over. This isn’t problematic in itself but the tracks begin to seem samey by the end of the story mode.

Getting down to the nitty-gritty of the gameplay mechanics, Coffin Dodgers brings an interesting twist to normal kart racers. Like many kart racing games, players can pick up different powerups to use to help themselves or hurt other racers. These range from homing missiles, a handgun, an EMP, rocket boosters. and a shield. These play like someone familiar with the genre would expect. Aiming is usually done by the computer aiming while the player drives, and makes player combat less than stellar, but still engaging.

Coffin Dodgers also adds a melee attack to the genre. You can charge up your melee attack to knock opposing players off of their scooters. This has the same impact as falling off of the course in Mario Kart, but because you cannot fall off of the earth, this is an acceptable compromise that adds some counter play to pure driving.

Driving mechanics also deserve a mention as I very rarely come across a kart racer that controls as well as Coffin Dodgers does. There is no need to drift, and given the cars I don’t mind the mechanic missing. Turns are tight, and the scooters control the way I expect scooters to control. Overall, the control is satisfying and simple.

Coffin Dodgers has a very interesting presentation, and the more I played the game, the more fond I became of it. The game looks like a 90s or early 2000s cartoon, specifically something like Ed, Edd, and Eddy. I appreciate this, as the humor in the game matches that which I remember from the show. The music, which admittedly was not too varied, was pleasant to listen to… when I was listening intently.

*This review is based upon a copy of Coffin Dodgers supplied to BG by MilkyTea. The game is available via Steam, and on Playstation 4 and Xbox One.

Coffin Dodgers is a very fun game. The game controls well and looks good, if a little aged. For the $10.99 asking price, this could be the kart racer you're looking for.

Erich was introduced to gaming by his grandfather before he could walk. Since then, he has grown up loving Nintendo and most games in general. He couples his love of videogames with journalism to cover news, provide reviews and tell it how it is in the gaming world.
Previous Dead Island: Definitive Edition gets Retro Revenge Trailer
Next EA reveals Madden 17 cover and gameplay this month