The Art of Tom Clancy’s The Division (book) Review

The Art of Tom Clancy’s The Division

Recently I was given the opportunity to check out The Art of Tom Clancy’s The Division book from Ubisoft. Now I have seen a few of these over the years, and they never disappoint.

192 pages long, retailing for $ 34.95, and published just weeks after the release of the hit title, on March 29th, 2016. This tome is amazing. The gang at Ubisoft wanted to make sure the reader knew what they were thinking at every turn.

Showing concepts they felt were ‘too far’ or ‘almost there’, you get a sense of how the characters threw their to-go bags together. Makeshift torches attached to rifles, various placement of ID lights, and the myriad of apparel. The subtleties that go into the different factions are incredible.

The differences between some of the factions is purely a matter of perspective. Whether you are a part of The Division, Cleaners, Rioters, Joint Task Force, Last Man Battalion or Rikers. Some are out to salvage what is left of society, some to guard what remains, and some just want to watch the world burn.

I am a huge fan of dark and gritty art styles, and Ubisoft spared no grit here, to be sure. From the burned out buildings, to refugees warming themselves by the fire, Ubisoft has captured it all. Making camps in train stations, stealing goods from the local emporium, even the overrun churches cannot help you here. What is left of New York City is in need of defending. And in The Division, that is what you are here to do.

Each district in The Division had its own art direction, which allowed the player to recognize where they were at in the world. Though beware of the Dark Zone. We are shown several examples in The Art of Tom Clancy’s The Division:

IN THE CENTER OF MANHATTAN IS A WALLED-OFF AREA FEW DARE TO ENTER. IT USED TO BE A QUARANTINE ZONE, A LAST LINE OF DEFENSE FOR THOSE TRYING TO CONTROL THE CHAOS OF THE BLACK FRIDAY OUTBREAK. THEY BUILD A WALL TO CONTAIN THE SICK, BUT SOON THERE WERE TOO MANY. THAT’S WHEN THE POWER WENT OUT ACROSS THE CITY AND THE AREA WAS EVACUATED. THE BEST WEAPONS, THE BEST EQUIPMENT, AND THE ONLY HOPE FOR A CURE WERE LEFT BEHIND. FEW GO IN, FEWER COME OUT. THIS IS THE DARK ZONE.

The theme for the Dark Zone is extinction. Sights such as crashed helicopters let you know just what sort of environment you are in here. There are snipers and more, just waiting to pick off any unsuspecting wanderers who enter unprepared.

New York was recreated in amazing detail, and then taken a step further to make you feel like you are truly trying to survive after the Black Friday breakout.

New York as been represented in many ways over the years. Prehistoric, Post-apocalyptic, and today we add another section to that list: Viral breakout. The artwork here is amazing. The teams at Ubisoft know how to do things right, and meticulously pay attention to detail. Why, who else would have this level of detail in their in-game graffitti? Ubisoft partnered with real graffitti artists to learn the ins and outs of the trade. I have not yet played Tom Clancy’s The Division, but after reading through this book, I think I would have a wonderful time. 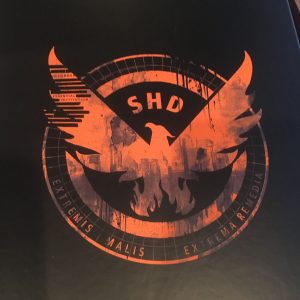 I've never played Tom Clancy's The Division, but this book makes me want to!

A fan of media on multiple platforms, I am always watching or playing something! Who knows what I will be on to next?
@mackeyp42
Previous Mirror’s Edge Catalyst release date confirmed
Next Blues And Bullets Ep 2 (PC) Review