Conan becomes the hunted in Conan The Slayer. 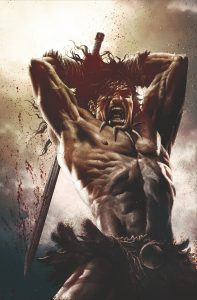 Alone, battle weary, and with nothing but his sword, Conan of Cimmeria faces his inevitable death in the arid wastes . . . but instead stumbles into a camp of Kozaki raiders. With a knife at his throat and a band of Turanian hunters at his back, will the half-dead barbarian find a new ally in the Kozaki chief?

It’s definitely an unfamiliar position for the Cimmerian to be in, but becoming the target and being on the run just might provide for some of what Conan fans know very well – brutal combat. After all, even being injured and on the wrong end of things, Conan is a man not to be messed with.

With famed writer Cullen Bunn on the creative team is also a huge bonus for this new book. If you don’t know, Bunn is the current writer on Dark Horse’s Harrow County, one of the very best horror books on the racks right now. Add to that that he has worked on massive books for both DC and Marvel like Deadpool, X-Men, and Aquaman, and you get a good idea of what he can bring to the table.

Sergio Dávila picks up the art chores on the book, and he’s as great an addition as Bunn, thanks to his experience in the swords and sorcery genre. He’s made no shortage of fans thanks to lending his pencils to Red Sonja and Swords of Sorrow both.

As a nice little bonus too, you can expect to see both standard and special variant covers on this one, bot provided by the super-talented Lee Bermejo and Mark Schultz. One to mark your calendar for, Conan the Slayer #1 lands in stores and on digital download storefronts on July 13th.

Jason's been knee deep in videogames since he was but a lad. Cutting his teeth on the pixely glory that was the Atari 2600, he's been hack'n'slashing and shoot'em'uping ever since. Mainly an FPS and action guy, Jason enjoys the occasional well crafted title from every genre.
@jason_tas
Previous New Patch from Frontier brings bobble heads to Elite Dangerous on Xbox One
Next GameStop talks VR, digital game sales, and new consoles