The promise is kept: we’re getting a Nintendo Direct before the end of the year, and it’s in two days. 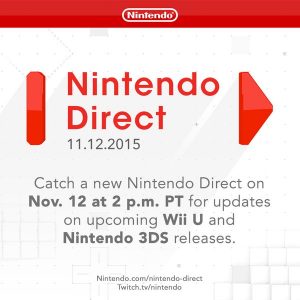 Nintendo’s next Direct- the first since E3 and Satoru Iwata’s passing- has been announced at last.  We’ll find out the latest on Wii U and Nintendo 3DS on November 12th at 2PM PST.  Hopefully that includes new trailers and in-depth looks at this year’s new releases, among them Animal Crossing Amiibo Festival, Mario Tennis: Ultra Smash, and Xenoblade Chronicles X.  More on announced titles like Metroid Prime: Federation Force, Mario & Luigi: Paper Jam, and the recently delayed Starfox Zero would help to get us pumped for next year (as would the launch details of Fire Emblem: Fates).

Nintendo has confirmed the NX and mobile projects won’t make an appearance.

Beyond that, who knows what we can expect to see?  The confirmed Pikmin 4?  The rumored The Legend of Zelda: Twilight Princess remake?  Anything on Smash Bros DLC?  It won’t be long until we find out!

Watch the direct here, when the time comes.

Brutal Gamer's Nintendo Editor began his gaming life a little late- at five years old. But he's made up for it in the two decades since, gaming and writing about gaming with the same passion, fervor, and unrelenting love as his five-year old self.
Previous New poster released for Bruce Willis’ newest flick Extraction
Next Opening 104 Xbox 360 titles heading to Xbox One announced