Nintendo of America has announced the Wii U exclusive Mario Tennis title will release on November 20th, 2015. 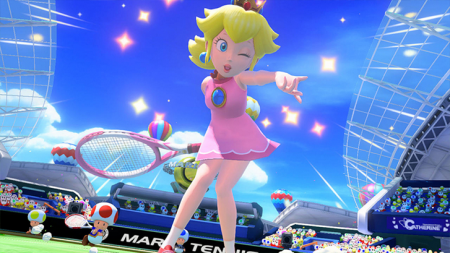 While Mario Tennis Ultra Smash was playable at E3, where it introduced the Mega Mushroom and Jump Smashes to the mix, we haven’t seen or heard anything about the title since.  Here’s hoping we will see a mini-direct or at least a cohesive launch trailer between now and release.

In the meantime, we’ll just have to speculate about how the new item and Jump Smashes will alter the gameplay, which retains Mario Tennis Open’s Chance Shots.  Personally, I’m hoping to see a plethora of items to help offset those Chance Shots (returns available frequently during rallies which exaggerate certain shots).  Throwing fireballs over the net, chasing down lobs in a cat suit, and sliding across ice in a penguin suit would certainly add flavor to rallies that begin to feel the same when the circles tell you what to do.

Brutal Gamer's Nintendo Editor began his gaming life a little late- at five years old. But he's made up for it in the two decades since, gaming and writing about gaming with the same passion, fervor, and unrelenting love as his five-year old self.
Previous mushroom 11 – of destruction and growth
Next EGX Hands-On: Just Cause 3