Rico Rodriguez gets set to liberate another paradise from a dictator’s iron grip. 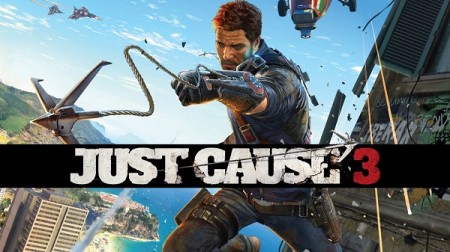 There are plenty of open world games around, and Just Cause is certainly towards the top of the list when it comes to over the top action shenanigans.  It’s been a good five years since we last checked in with Rico in Just Cause 2, and now he’s off to cause trouble for yet another dictator, and we got to go along for the ride with him.

Just Cause 3 is set in Rico’s homeland of Medici, and contains the usual sprawling land masses and opportunities for causing chaos.  Medici is a beautiful, Mediterranean looking area with beaches, mountains and lush forests.  The demo at EGX basically dropped us in the middle of the land and gave us 20 minutes to just cause as much chaos as possible.

Medici is a very pretty place to be, and there’s a much bigger variety of places to go and things to do here.  Modern looking sports cars allow you to speed through the countryside, and there’s plenty of older vehicles, bikes and planes, should you wish to use them.  From the video that was played before we got to actually try the demo, it was possible to order a plane drop right in the middle of a farmer’s field and take off in it.

Creativity and destructive are actively encouraged in the game, and the changes to the grappling hook emphasise that.  As well as being able to connect multiple items together, it’s also possible to wind the grappling hook in when it’s attached, allowing you to pull things closer together.  In the video, this was used on a statue to cause the arm to break off and hit the face of the statue, making the whole thing crumble.  Grappling between a weak building and a solid object would cause the grappling hook to pull the weaker structure down, causing potential explosion and death where it falls.  It’s good to know that the crazy physics have been retained for this game, while accuracy of weapons and the hook have been improved. 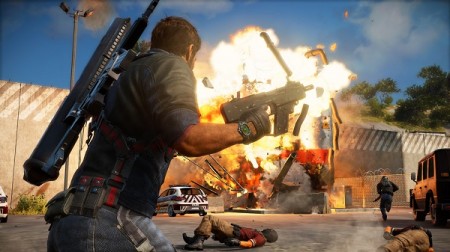 From the short time we got to play Just Cause 3, it looks as thought Avalanche have ramped up what was good, tweaked some things that were a problem and ramped up the chaos.  It’s looking like a whole bunch of fun and we can’t wait to get our hands on the finished game.

Just Cause 3 is due out on December 1st for PC, Xbox One and PS4.

Mike is Brutal Gamer's Indie Editor. He has been playing video games since the early 90s and is fond of racing games, puzzlers and MMOs. Typing /played while in WoW makes him cry, but not enough to stop him playing some more.
@Ognawk
Previous Nintendo Lobs up Mario Tennis Ultra Smash (Wii U) Launch Date
Next Uh oh, Sega looks to improve profits by offering ‘voluntary retirement’ 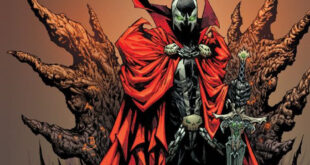 There’s a ton and a half of stuff being planned for NYCC this week, on …