One of the best space-based RTS’ of all time returns in remastered form, but does it hold up? 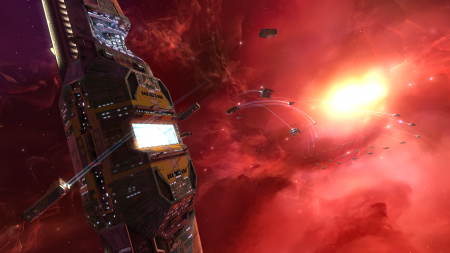 I am a new Homeworld player and honestly I didn’t know what to expect except for what I already knew: Homeworld is an RTS game that was originally released in 1999, and that it blew minds (mine included) when it first came out. I was an avid gamer even in my youth and believe me, when I saw my neighbor playing Homeworld on his then-state-of-the-art PC, I could only stare in jealousy because I knew that my PC would not be able to play the beast of a game that was Homeworld.

Simply put, for beginners like me, Homeworld is an RTS, or a Real-time Strategy game, similar to WarCraft, StarCraft and BattleRealms. Only it’s very different in that it’s set in a massive frontier (ergo, Space) and is also one of the first of the genre to implement 3D movement.

RTS games back then had you staring on your bases like you were staring at a map, it was an overhead tabletop view that dominated the RTS genre in the 90s (even today really- ed), but Homeworld changed things up by allowing players to zoom, rotate and basically enjoy the individual units/ships as they zoomed along the endless space. Of course, with 3D camera support the game also gave players more freedom of movement which added to the appeal of the Homeworld games.

Everything that I’ve written up to now was based on what I knew from the games and the various Homeworld resources, but it’s time I wrote about the real McCoy (Not a Star Trek pun, I swear) and what I personally experienced with the Homeworld Remastered Collection. 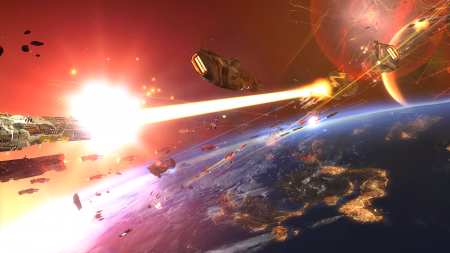 Graphically speaking, the game looks amazing and that’s saying something considering the fact that the first Homeworld game is 16 years old! At first, I couldn’t believe how wonderful the game looked and I wanted to test its limits. I played a few matches and couldn’t help but marvel at the fact that even the most miniscule of details were rendered properly. I was expecting an edgy pixel monster, even with the update, but everything looked smooth, even if I zoomed in to view each unit individually. The game has aged well to be sure, but the HD remaster has cemented that fact with its beautifully upgraded visuals.

Another surprising detail that I liked is the game’s updated user-interface! Since this is my first time to play the Homeworld games for myself, I looked up some gameplay videos of the vanilla Homeworld games and what I noticed is that the newer UI is better, sleeker and much more accessible, at least for a noob like me.

The music in the game has more of an ambient feel to it than anything else, and it works well for a game that takes place in space. It doesn’t seem too minimalistic for that matter and it feels just right. Some of the songs are actually pretty good too, and I found myself more immersed in my game more often than not because of the music. What really takes the cake, however, are the voice actors who worked on the game.  I especially enjoyed listening to the narrator, and it made becoming a Space Commander that much more awesome because of the story as told audibly by the narrator and the characters themselves.

As for that, the story is dated by today’s standards, but it was good for its time and I still enjoyed what I read and experienced for myself. Homeworld is no Battlestar Galactica but as a video game it comes close enough to the accepted modicum that is storytelling in a Space Opera.

As I continuously played the game, some scenes and skirmishes took me back to the time when I watched the animated epic Legend of the Galactic Heroes, and having a video game trigger pleasant memories of a show that I am fond of, presents clear evidence of the skill of the writers who worked on this title. 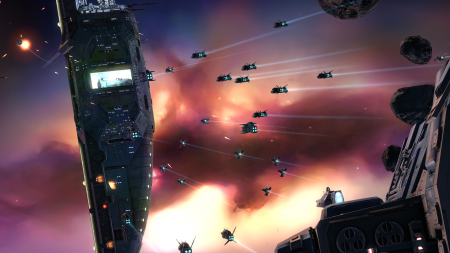 The controls are simple enough to be understood and the learning curve is not too steep, however, actual mastery of the game and skillful execution of strategy and tactics are in totally different categories and underestimating the somewhat difficult nature of the game could prove to be deadly to your fleet… so tread carefully. Anyway, the game is controlled with the keyboard and mouse as is the norm with most RTS games, and everything felt right with the controls proving to be smooth and responsive, so no problems there.

Content-wise, the Homeworld Remaster Collection is a heck of a steal as it contains not one, not two but four games! The collection comes with the two HD remasters and the two original vanilla Homeworld games if you want to play the game in its purest form.

Personally, I didn’t experience a lot of issues such as glitches, frame drops or graphical hiccups and that for me is a great thing considering the fact that, again, The Homeworld Collection is a remaster of games that are quite old. Old, but not dated though!

The Homeworld games proved to be relevant with the graphical upgrade this collection has given it as it tests your mettle with mission after mission of fleet vs fleet combat against an AI and a steadily increasing complexity of stratagem and tactics employed. The game should prove to be a challenge for first time gamers while providing a nostalgic yet still competitive feel for older players who enjoyed the game in its vanilla form a decade ago.

Benj likes video games, neckties and scotch. His favorite games include Resident Evil 2 and Final Fantasy VIII. You may contact him at [email protected]
@ggburroughs
Previous Nintendo’s sales are finally back up, but it’s not all good news
Next Age of Ultron comes home this Fall