Home / Comics / Graaaaah! Chewbacca series in the works at Marvel

Graaaaah! Chewbacca series in the works at Marvel

Marvel promises lots of heart and plenty of action for the first ever solo book starring everybody’s favorite walking carpet. 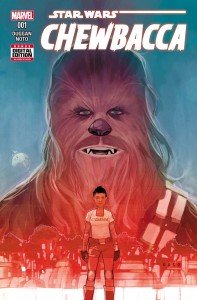 Starring in his own book from writer Gerry Duggan and artist Phil Noto will be the co-pilot of the Millennium Falcon, Chewbacca. Usually related to a sidekick-type character, Chewie will be taking center stage in the book, which will see him embark on a special mission for the Alliance. As usually with both Han and Chewie though, things get a little more complicated than that.

Known for his big heart, short temper, and booming voice, Duggan plans to get to the core of what makes Chewbacca one of the strongest warriors in the Star Wars universe.  Speaking with Marvel.com, Gerry Duggan says, “He’s a hero, plain and simple. He’s a giant-sized underdog. He’s faithful, fierce, and can be playful. At the beginning of the story he’s on a very important mission. One he sets aside to help those in need. By the end of this arc we’ll have met the soul of the Wookiee. We’ll understand what he fears, and we’ll know why he picked up his bowcaster. Yes, this story will be an action-packed thriller, but I think it has a very strong Wookiee heart, too.”

Accompanying Chewbacca in this brand new series is a young and feisty co-star, Zarro, whose home comes under attack from the Empire and Duggan and Noto are excited to show how this unlikely pair take on the ruthless grip of the Empire. “Zarro’s home is under threat, and when others shrink, she stands tall,” says Duggan. “At first glance, she sees Chewie as the extra muscle she needs. The brains attached to those muscles will be a surprise for her….and I think how Chewie and Zarro manage to deal with the threat will be a fun surprise for fans. Both Phil and I are so excited to be collaborating on a Star Wars comic. The term ‘dream project’ is probably overused, but there is simply no other way to describe the gig. If fans have half as much fun as we do, then everybody’s in for a fun ride.”

Don’t call him a fuzz ball. Don’t call him a walking carpet. This is Chewbacca – fierce and loyal warrior of Kashyyyk in a brand new Star Wars series coming from Marvel this October!

It’s going to be a busy Autumn for Star Wars fans, with not only a new movie coming up in December, but the big Marvel published Vader Down crossover comic event. Not up to speed on Star Wars’ new expanded universe? Make sure you check out the upcoming graphic novels Star Wars Vol. 1: Skywalker Strikes and Darth Vader Vol. 1.

Jason's been knee deep in videogames since he was but a lad. Cutting his teeth on the pixely glory that was the Atari 2600, he's been hack'n'slashing and shoot'em'uping ever since. Mainly an FPS and action guy, Jason enjoys the occasional well crafted title from every genre.
@jason_tas
Previous Blaster Master debuts on the eShop in this week’s Nintendo Download
Next The truth returns in 2016 as new X-Files teaser arrives